Sunflowers: From Field to Fuel

Drawing the connection between diversified agriculture, renewable energy, and food production in Vermont

Farmers across New England want to diversify operations, lower fuel and feed costs, and be more self-sufficient. Momentum is gaining for raising oilseed crops like sunflowers, canola, and soybeans to make biodiesel for fuel and oilseed meal for livestock feed, in addition to being sold as crops. 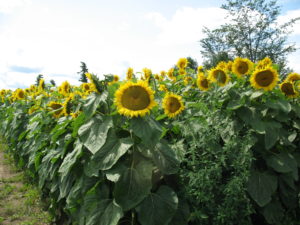 State Line Farm Biofuels is at the forefront of oilseed crop growing and biodiesel processing in the Northeast and the first to grow and process on-farm in Vermont. Located in North Bennington, the Williamson family has owned and operated State Line Farm since 1936. The falling milk prices of the 1990’s led to diversifying operations and today their maple syrup, honey, sorghum syrup, and hay are sold in local markets. In 2004 owner John Williamson and his family began experimenting with sunflower, canola, mustard, and flax varieties in an effort to fuel their farm with biodiesel.

Biodiesel fuel can be used to power most any diesel engine equipment on varying levels of scale. “We used to have a really small batch processor making about 100 liters to a batch. Then we moved to the biobarn and built a reactor that makes about 400 gallons to a batch—a batch of fuel is the amount of oil that is reacting to alcohol and lye,” John explains.

The harvested seeds are dried and stored in a grain bin and then moved through an oilseed press to yield two products: meal and oil. Using the relatively simple batch reactor conversion process (oil, alcohol and lye), the oil from these crops becomes a low cost renewable fuel after being refined into biodiesel.

The meal could be considered the byproduct, yet finds great value as a potential feed for livestock like dairy cows, goats, hogs, chickens, and sheep. It’s said the Amish feed sunflower meal and oil to their horses, which is what gives them their healthy and shiny coats. 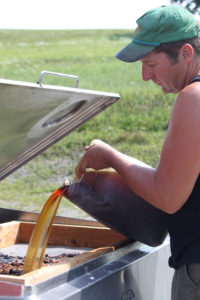 At 40 plus acres of sunflowers, flax, mustard, and canola John averages 75 gallons of biodiesel per acre. Even factoring in wind, rain, and wildlife damage, John considers the State Line Biofuel operation a low cost fuel source, paying for both time and equipment.

“If you had to start from scratch, it is cost prohibitive. But if a farmer is already set up to grow grains, you’re most of the way there. If you can plant, harvest, and store grain, it’s really just the oil mill and biodiesel mixing equipment that’s needed,” says John.  “There are many ways to look at costs, but the bottom line is it’s cheaper than buying fuel and money doesn’t leave the farm.”
John has tracked the cost from tilling the ground to harvesting oilseeds and processing and at his calculations the $2-2.5 per gallon to make biodiesel is cheaper than buying petroleum. The oilseed meal byproduct further shrinks operation costs by reducing the need to purchase grain. Additionally, John sells the surplus feed and oil, as well as the biodiesel.

Borderview Farm leases a number of acres to UVM Extension for various oilseed crop field trials, including soy, sunflower, canola, flax and camelina. Roger also actively assists as a research partner to Dr. Heather Darby (UVM Extension) by preparing, seeding, and harvesting the plots; and then pressing the oilseeds for conversion into biodiesel and livestock meal. Launched in 2012 and funded by the Vermont Sustainable Jobs Fund (made possible by the US Department of Energy and US Senator Patrick Leahy), the Farm Fresh Fuel Project attempts to include as many farmers as possible in Grand Isle County, Vermont in the production of oilseed crops. By producing their own fuel, food, and animal feed with oilseeds like sunflower and canola these farms will serve as a unified model for other small communities. 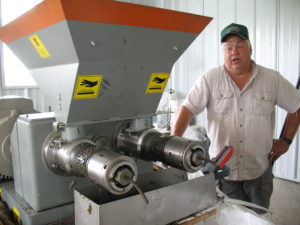 Scales of biodiesel operations can range from millions of gallons on a commercial scale to the hobby scale of under 100 gallons. As a small scale producer, Roger estimates 100 to 3000 gallons is affordable for farmers who make their full living farming. “When you’re farming for a living and have your own equipment and land, it’s utilizing what you already have that makes biodiesel affordable,” Roger states. Like John at State Line Farm, Roger finds when calculating the cost of producing the fuel, including fees and processing, it is still cheaper than buying fossil fuels.

Sunflower oil is especially high in protein and is Roger’s choice oilseed crop. “There are very few oils that can be made into biodiesel and sunflower is one of them. Sunflowers have one of the higher percentages of oil content. Soybeans are only 25% oil content, sunflowers are 35-45%. Plus, the community loves them. Sunflowers are beautiful and folks enjoy the aesthetics and a renewable energy farm source with less odorous results, especially in such a pristine and delicate landscape as the Champlain Islands,” says Roger.

Not only does Roger refine his own farm’s sunflower and canola seeds into biofuel, he also works with the Farm Fresh Fuel Project and Champlain Island (Grand Isle County) farmers to process a percentage of their oilseed crops. Farmers take their seed harvest to Borderview Farm, and it is returned to them as biofuel. “The program goal is to harvest 100 acres of oilseeds for 7-10 thousand gallons of fuel. Forty percent of the oil is produced into biodiesel and the remaining meal is used as a feed and fertilizer source,” explains Roger. UVM Extension researchers have also demonstrated the benefits of oilseed meal as a well-balanced soil amendment.

Full Sun, a new company co-founded by Vermont bioenergy industry innovator, Netaka White, is developing a commercial oilseed processing facility outside of Middlebury, Vermont. Netaka has been at the forefront of developing Vermont’s oil crop infrastructure & commercial biodiesel markets since 2003. He directed the Bioenergy Initiative at the Vermont Sustainable Jobs Fund, a primary funding, technical support, and infrastructure development organization for both State Line and Borderview Farms.

Full Sun’s business model as a northeast regional purchaser and processor of specialty oilseed crops is to recruit family farmers to grow organic and non-GMO sunflower, canola, soybeans and other oil crops. Full Sun then purchases and processes the seeds into two co-products: edible oil and high protein meal. The oil is sold into the food sector and for livestock feed, and the oilseed meal (also a feed ingredient) is sold to local dealers and farm direct.

“This business model will have a direct impact on the number of Vermont farms earning a profit by growing oil crops in their rotation. Full Sun will contract with local collectors to insure our used cooking oils are picked up from local restaurants and food service businesses and are converted to renewable fuel by Vermont biodiesel producers,” describes Netaka. “In this way, Full Sun cooking oils return to our grower/partners in the form of biodiesel to power the next season’s crop production, completing the ‘Farm-Food-Energy’ cycle.”

Rachel Carter is communications director at the Vermont Sustainable Jobs Fund, a non-profit organization created by the Vermont Legislature in 1995 to accelerate the development of Vermont’s green economy. She can be reached at rachel@vsjf.org.
Posted in Small Farms Quarterly