At Phoenix Farm, a small, family-run homestead, we had the opportunity to get a breeding pair of American Guinea Hogs through a pass-on program in the fall of 2010. Over the last three years, our experience with American Guinea Hog (AGH) pigs has convinced us that they are well suited to small, homestead-style farms like ours.

What Are American Guinea Hogs?
American Guinea Hogs are an endangered breed of farm animal. In 2005 when a group of AGH-loving farmers founded the American Guinea Hog Association (AGHA) to preserve and promote the hog, they were only able to locate a few hundred AGHs. Today, there are around 1200 registered with the AGHA. Guinea hogs tend to be small; an adult boar will not exceed 350 pounds. Our older boar does not stand as high as my knee. AGHs tend to be friendly and in most cases can be moved from one part of the farm to another or to a vehicle for transport simply by leading them with a scoop of grain. Because sows do not get too large, there is little risk of overlaying, which is when a sow squashes her piglets to death. 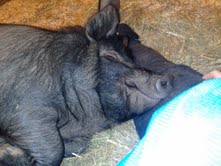 Vanessa snuggling with the author. All photos by Ada Kerman

These traits – small, friendly, good mothers – are some of the reasons I recommend AGHs for small farms. It’s nice to have a pig that is easy to handle, rather than a 1000-pound animal from one of the modern breeds. Pigs are also well-suited for land management as they are good at clearing and fertilizing brushy ground.

What Kind of Care Do They Need?
As discussed above, protecting piglets in the farrowing pen does not require as much attention as you will see in the literature. One of our farrowing pens has a 2×4 running around the wall near the base, providing a small cranny piglets can nestle into if they want to get away from their mother. We also have an attached creep with access spaces large enough for piglets but too small for the mother. In spring through fall, pigs are out on pasture with three-sided shelters. We put ours on skids so we can pull the skids around with a pickup or tractor.

Elysa Bryant of Stonewell Homestead in Gilford, Connecticut houses her AGHs in the largest animal crates she can find or in cattle panels to encourage the pigs to make their own nests.

“My gilts haven’t done that yet,” she said, “but I always try to put them in places where they have the opportunity. Invariably when we’ve given them two large crates, they always prefer to be together even if space is cramped.”

On Phoenix Farm, we give our pigs a combination of pig grain and food scraps, and also have them out on pasture where they can graze and root for as much of the year as possible. At one point, I calculated that I was feeding our yearling pigs 10 ounces of grain each, twice a day; though when we have high-protein food scraps such as yogurt or eggs this amount can be reduced significantly.
Because it is easy to overfeed hogs when using grain, it is important to keep a close eye on their girth. A hog of good weight will have some definition in front of the hips but will not, as my sister Hannah Kerman said, “look like a coffee table when viewed from above.” If you catch it early, reducing the volume of feed a pig receives will get them back to a good weight; like humans if they are considerably overweight for a long time it is harder to slim down. 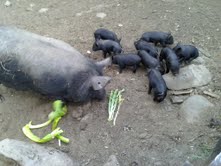 Samantha and her piglets.

At Stonewall Homestead, Elysa amended her feeding system over time. “When we first got the pigs,” she recalled, “we fed them grain and restaurant food scraps twice a day based on the breeder’s recommendations.”

AGHs are known to be good rooting pigs but at this rate of feeding, Elysa’s were not. “When we couldn’t get restaurant scraps any more, they got grain and our own compost,” she said. “Then they started to root a lot more. You start to realize that by handing them food, you aren’t allowing them to go out and select their own. Now I take care not to overfeed them grain because I want them to keep rooting.”

Potential Challenges
When I asked Elysa what she wished she had known before getting her pigs, her answer was about “the transportation aspect of getting them bred. You really have to have the connection to someone with equipment, a truck or something.” Her gilts are welcome to breed here at Phoenix Farm, but lack of transportation has prevented it to date.

Farmers wanting to raise market pigs should consider that AGHs are relatively small, slow-growing animals. We breed our pigs for their meat and their land management and improvement services. The AGHs that we slaughter after one year typically dress out to about 60 pounds hanging weight, and the ones that we quarter at 6 months yield 40 pounds of quarters. For this reason, our best potential market is well-to-do foodies who are willing to pay extra for local heritage meat, and chefs who may market to similar customers. AGH meat is comparable or superior in taste to the trendy Mangalitsa pork, so this marketing strategy seems plausible.

How Do Pigs Fit Into the Farm as a Whole?
AGHs are skilled at land clearing as we learned right away at Phoenix Farm. We first housed our pigs in a barn that was full of blackberry brambles. In the spring when the snow melted they really went to town and by summer had cleared the area. Looking to the future, we plan to use them to thin the underbrush in a woodlot we are converting to silvopasture.

When our pigs are rotating around pasture, we sow plants – turnips, squash, beets, etc. – in an area right after we move the pigs out. The plan is to rotate the pigs back around when the crops are ready and allow the pigs to harvest their own food. Because their rooting leaves the ground very uneven, they are kept out of hay pastures.

Similarly, Elysa used her pigs to help clear a wooded pasture area of troublesome poison ivy and poison oak. In addition to pigs, her pasture rotation also includes goats, laying hens, and chickens. Elysa sends the animals into pasture in a particular order.
“Our rotation,” she said, “is to send the goats in first, then the pigs, then the chickens. The goats veer off into another area and do brush control, then the pigs and chickens stay together for a while.”

From niche market meat production to pasture management services, there are many benefits to raising American Guinea Hogs. Their friendly nature and small size are a good match for a small farm.

Ada Kerman is a partner of Phoenix Farm in Marlborough, NH. She can be reached at info@phoenixfarm.org or (603) 876-4562.
Posted in Livestock & Dairy, Small Farms Quarterly