Working Oxen on the Farm Today

I never thought I would be learning to farm with oxen.  I grew up in Chicago and I did not get to see the country all that often.  The only “Bulls” I knew of were a professional basketball team.  After high school, I chose to go to college out in Iowa.  It is interesting how a new place can influence your ideas.  Well that summer, I decided to work on a farm.  I was curious, excited, and I felt free to explore my interests.  But I had not gone so far as to think that I would want to become a farmer.  That only came after I had worked on a few more farms.  I make these statements today.  But not too long ago, most people lived in the country, farmed the land, and had draft animals.  If they heard me say this, they would probably look at me funny. 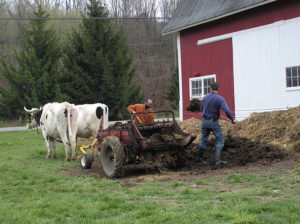 From Left to Right: Burt, Marvin, (the oxen) Andy, and Jake. Photo courtesy of Jake Czaja

Today, using oxen primarily for farming is uncommon in the United States.  The only other oxen I have encountered reside on historical interpretation farms like the Howell Living History Farm or Sturbridge Village.  The truth is that oxen are an amazing asset to a farm and are as useful today as they were yesterday.  Historians of early America say that if it were not for the cow and the ox, then none of us would be here today.

There is a farmer in Northern Pennsylvania, Millerton to be exact, who trains and utilizes oxen to make a living farming.  He grows over 30 types of vegetables on about 1 acre, about another acre of various grains, and raises pastured chickens, pigs, and grass-fed cattle.  He does not have a tractor to work the land.  Instead, he has a Holstein team of oxen to plow, spread manure, haul stones, cart, cultivate, harrow, disc, skid logs, and pull you-name-it.  He also has me.  I am farmer Andy’s apprentice for this year.

In order to be of any help to Andy, I have to learn to teach or “train” the oxen.  According to Andy, oxen are never finished with their schooling.  They respond to voice commands and negative reinforcements of the whip that are both built on their prey animal instincts.  So if we give the oxen a command, such as, “Come here!” the oxen move forward, because they associate the sound and a crack of the whip on their rumps if they do not move fast enough.  For all we know, oxen are not rational thinking animals like us.  We have to be always thinking about where we want to pull the stoneboat, giving the oxen the right commands, making sure the oxen respond with the right movements, and see if we have navigated the corner without any rocks falling off.  Driving oxen is quite a skill! 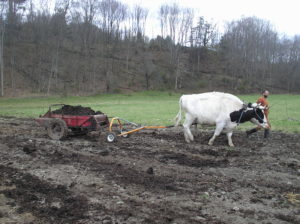 Spreading compost on the garden where the roots – beets, carrots, parsnips will be planted. Photo by Jake Czaja

My first few practices driving Burt and Marvin were not what I had expected.  I thought, “Ok, ok, I just tell them ‘Come here!’ then I tell them ‘Whoa!’ and we stop right where Andy wants the stoneboat.  How hard can that be?”  Well anybody who has played a game of golf can probably sympathize that trying to put an object in a certain spot while using another tool can be challenging.  In the case of the oxen, I am developing a “sixth sense” of where exactly that hitched stoneboat is in relation to where the oxen are.
A discussion of oxen would not be complete without mentioning the benefits.  Why would anybody want to use oxen over a tractor or horses for that matter?  I am attracted to oxen because they are economical when compared to tractors or horses.  You can pick up a pair of calves from the local dairy for $20 a piece (that is honestly what one farmer was going to sell his calves to me for), train them individually in your spare time, cut out a yoke and bows out of a log, chain your team to a wagon, and are good to go!  Maybe I left out a few details about how much time is involved in training a mature team or how feeding milk to your calves at an early age can make all the difference later on.  The knowledge and skill required to use oxen will make you become a better farmer.

Andy tells me stories from time to time about his father.  His father grew up around oxen and horses on the farm.  At age 4, Andy’s father was making his own yoke for his team of oxen.  By age 6, Andy’s father skidded all the firewood for the winter with his two year old team of oxen.  At age 7, he was plowing up the wheat fields with the horses all by himself.  The only thing that would slow this kid down was a lack of a safety feature on the hay tedder.  One day, the kid’s foot slipped off the pedal that operated the hay tedder and went right into a gear.  He left the horses hitched to the tedder and ran home crying with a cut foot.

I find that Andy’s stories tell a lot about farming and youth.  Traditionally, the kids did a lot of the farm work.  Sometimes they did all the farm work, especially when the father was drafted for the military or was working another job.  I also think about Andy’s father and how young he was working with these animals that weighed 30 times his body weight.  I tell Andy that his father was exceptional, some kind of prodigy farmer.  Andy replies, “No, my dad always said with regret that he could not plow by himself till he was 7”.  Apparently, there were some kids in the neighborhood that could plow by themselves when they were 6!

Now, I will be turning 23 this year and I am looking at making my first yoke.  I may be several years behind Andy’s father, but I plan to keep up the tradition of working animals.  Who knows, I might even get to a point when I can plow all by myself.

Jake is an apprentice at Spring Meadows Farm in Millerton, PA.
Posted in Small Farms Quarterly