Off the Ground: Conservation Program Promotes both Hay Yield and Bird Habitat 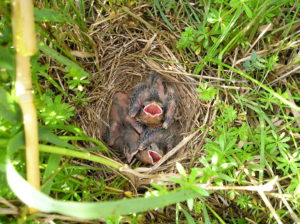 Bobolink nestlings in a field enrolled in the program since 2008 by Toby Alexander.

In our last two “Stewardship and Nature” columns, the National Audubon Society described the partnership they have had with the Natural Resources Conservation Service and landowners to facilitate the management of wildlife habitat to promote avian species (birds). In this article Toby Alexander explains the process used to develop an agronomic practice and financial incentive for the benefit of grassland birds and farmers in Vermont. – John Thurgood, Column Editor
You can’t manage for wildlife on intensively managed agricultural land. That is what skeptics would say. But partners in Vermont concerned with conservation of declining grassland songbirds had an idea. And, they proved the skeptics wrong.
Starting in 2002, University of Vermont (UVM) research on grassland bird survival and nesting on hayfields in the Champlain Valley of Vermont began to show an interesting pattern to the researchers. True to accepted knowledge, intensively hayed fields (3 or more cuts a summer) basically provided no breeding success to species such as bobolinks and savannah sparrows. Breeding success is indicated by numbers of fledglings (young birds leaving the nest) produced per female per year. The researchers, then PhD candidate Noah Perlut and Professor Dr. Allan Strong, found a distinct pattern through their breeding timelines where the bulk of the nesting of these birds took place in Late May through early to mid July. They decided to go to the NRCS with an idea. 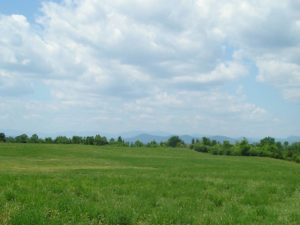 Noah and Allan worked with Vermont NRCS Biologist Toby Alexander to develop a management plan that would continue to support agriculture but would also provide breeding opportunities for grassland birds in a unique and innovative way. Historically, hayland management for grassland birds has been to delay all mowing until after the breeding season. This is great for birds but provides limited potential for keeping agricultural land very productive. Since these birds are so tied to grass based agriculture in much of their range, managers need better tools to be able to work with farmers in a working landscape. The management proposed and implemented in Vermont allowed active agriculture to continue, with three cuts of hay a year, while increasing breeding success from 0 fledglings to 2.8 fledglings per female per year. This level of breeding success is nearly as high as if the field were set aside during the entire summer.
The management is relatively simple. The farmer can continue to get their first cut of hay in mid to late May. They then will delay the second cut 25 days longer than normal which equates to 65 full days. After delaying the second cut, they can continue to make additional cuts on their own schedule through summer and fall. By providing a little more time during the peak of the breeding season, grassland birds receive a significant improvement in breeding success. UVM and NRCS designed an incentive based practice that would set a schedule for the first two hay harvests and compensate the farmer for the loss in value of the second cut of hay. 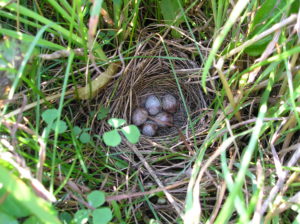 The practice was first offered through the Environmental Quality Incentives Program (EQIP) in 2007. Since then Vermont NRCS has enrolled about 1,300 acres of hayland under this management. The management regime has been evaluated and proven to be a success on enrolled fields through continued research and monitoring by UVM. The success of this management is due to the researchers taking a practical approach and working collaboratively with the NRCS to create a practice that both supports agriculture and a declining suite of species.
If you would like to implement the Grassland Bird Management practice on your farm, please contact your local NRCS office. For a directory please see: www.nrcs.usda.gov. Due to an unforeseen set of circumstances, VT NRCS was unable to offer this practice in Vermont for 2012, but hopes to reinstate the practice in 2013. 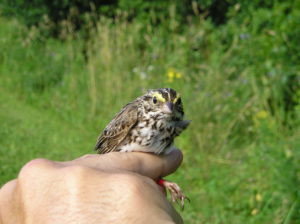 The study was funded in part by the NRCS Agricultural Wildlife Conservation Center with a resulting Wildlife Insight #88 titled “Management Considerations for Grassland Birds in Northeastern Haylands and Pasturelands.” The findings from this study have been published in numerous peer reviewed scientific journals with a specific article on this NRCS funded management in the Journal of Wildlife Management, “A Model for Integrating Wildlife Science and Agri-environmental Policy in the Conservation of Declining Species.” Finally, an article on the study and this management was published in December of 2009 in National Audubon magazine – Buying Time.