My Dad used to tell about working on his aunt and uncle’s farm in the summer.  Doing some rapid math, that may have been in the early 1930’s.  He didn’t tell many farm stories but a brief one that stands out involved working during haying season.  He emphasized the extremely hard work — the heat, the sweat, the breathing, the hay mow — all to impress upon me his good work ethics.  Dad’s farm story always ended with Aunt Minnie preparing and bringing out to the field or barn a very refreshing drink called switchel.

When asked what switchel was, my father said he really didn’t know exactly but thought it had vinegar, water and honey in it.  For years I thought it was an Aunt Minnie and Uncle Charley thing.  However, over the last seventy-some years I have heard other references to switchel and I discovered some people called it haymakers punch.  Others have referred to it as switzel, swizzle, ginger-water, and switchy.

Recipe for Switchel (or Haymaker Punch)

1 Cup Cider Vinegar
1 Cup Molasses
1 Tbls Fresh Ginger (grated)
1 Quart Water
Stir all ingredients together and serve on ice. Serves 4 to 6 people. If you have time, prepare 4 to 8 hours in advance, as it helps to mellow the ginger.

One summer as a teenager, I helped a farmer family friend with his haying when he was short of manpower.  My father was absolutely right, it was hard work.  In the early 1950’s, hay was baled and left on the field to be lifted and stacked onto the hay wagon for the trip back to the barn.  After the baler dropped the bale, one of us would carry it with a hay hook and lift that heavy concentration of hay to the wagon, where one or two others would lift and stack them. The longer the day grew, the heavier the bales got.   “Hay dust” was created every step of the way which made breathing difficult.  A hay bale elevator moved the bales from the wagon to the hay mow door.  The worst job of all was to be in the hay mow stacking bales where the heat and hay dust intensified.  The chaff would stick to a sweating body and the air circulation was almost non-existent.  All we got to quench our thirst was cold spring water.  No switchel for us. 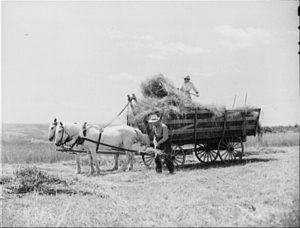 An elderly farm couple hoists hay into the wagon in Schenectady County, New York, 1943. Courtesy of the Library of Congress Archive.

Switchel originated in the Caribbean and became a popular summer drink in the American Colonies in the late 17th century.  By the 19th century, it was a traditional drink to serve to thirsty farmers at hay harvest time.  Hence, the nickname haymakers punch.  Switchel not only quenched the thirst of those farmers in the hay fields but it also replenished their electrolytes needed to keep them going in those hot, humid summer days.

Like many other recipes, all the “Aunt Minnie’s” out there had their own version and called it whatever they wanted.  Most recipes call for Cider Vinegar, Molasses, Ginger and very cold Water.  However, many resources mention that honey, sugar, brown sugar or maple syrup could be substituted in place of molasses.  Dad wasn’t too far off in his description of Aunt Minnie’s recipe.  In Vermont, oatmeal and lemon juice were sometimes added.  Once the drink was consumed, the switchel-soaked oatmeal became a snack to be eaten.  A Vermont physician D.C. Jarvis, recommended a mixture of honey and cider vinegar which he called  ”honegar”.

Even our literature contains references to this beverage for the thirsty.  Herman Melville wrote in I and My Chimney, “I will give a traveler a cup of switchel, if he want it; but am I bound to supply him with a sweet taste?”

Another author, Laura Ingalls Wilder in The Long Winter, describes a switchel-like beverage that her mother had sent for Laura and her father to drink while haying: “Ma had sent them ginger-water.  She had sweetened the cool well-water with sugar, flavored it with vinegar, and put in plenty of ginger to warm their stomachs so they could drink till they were not thirsty.”

It was another time but the same old beverage.

I have a neighbor who is about the same age as my father would be, if he were alive, and who was raised on a farm in our area.

While having coffee one morning, I asked him if he ever heard of switchel on his farm.  “I sure did” he said.  “Did you drink it?”

“Yes I did and it tasted good,” he added.  “Do you know what ingredients were in it,” I asked?

“I have no idea,” he confessed.

I’m guessing that times were tough even in the years leading up to the Depression.  Folks cut corners any way they could and maybe it popularized switchel as a refreshing social drink as well as a necessity in the hay field.

In hopes that Switchel, the time tested, thirst quenching, refreshing beverage from the Caribbean may be enjoyed today, the following basic recipe is provided for all of you to try.  You might even like it.