We are pleased to introduce the community supported fisheries model in this edition and to feature two of the producers and one distributor who are creating the roadmap for direct consumer access to fresh, healthy fish from local waters. In subsequent issues we will feature more ‘boat to fork’ stories. They are inspiring examples of innovation in a time of desperation that have the potential of turning the small-scale fishing industry around.

The Community Supported Agriculture model (CSA) – where the farmer provides fresh produce weekly to members who have bought shares at the beginning of the season – is now one of the most popular means of marketing for the small grower.  The model has been adopted by farmers coast to coast and continues to find its way into new kitchens as more people realize the value of locally grown produce and the growers who provide it. 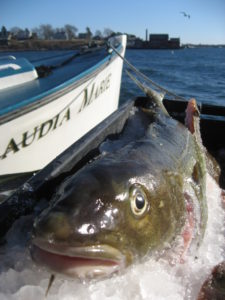 Cod freshly caught and on its way to Cape Ann's CSF customers. Photo by Steve Tousignant

So, perhaps we shouldn’t be surprised that the diminishing small-scale fishing industry has started looking to the CSA model as a means of survival.  Small-scale fishermen have struggled to compete for years with the behemoth industrial scale factory fleets operating in global markets.  Today, there is hope for those small, mostly day-boat owners who have been rapidly disappearing.  Thanks to an innovation that began in North Carolina and then spread to Port Clyde, Maine in 2007, the National Atlantic Marine Alliance estimates that there are approximately twenty other sites in the U.S. and Canada where Community Supported Fisheries (CSF) are operating, and the list is growing.
Cape Ann Fresh Catch CSF
Cape Ann Fresh Catch out of Gloucester, Massachusetts began in 2009 and is now the largest Community Supported Fishery, according to Operations Manager Steve Tousignant.  The CSF purchases approximately 100,000 pounds of fish a year.  It operates under the administrative and purchasing arm of the Gloucester Fishermans’ Wives, a non-profit organization, who took action when they saw the cultural and social erosion of their venerable centuries-old fishing community.  It is a spiraling problem that has spread rapidly in many coastal areas.
Essentially the Cape Ann model begins in Gloucester where the fish is landed and purchased by Ocean Crest Seafood, the region’s official dealer.  Tousignant says, “They get the freshest fish that comes in from a core group of about three dozen, mostly day-boats”. The daily catch is then transferred to Turner Fisheries who process and package the fish, and within hours, the fish are loaded on to Cape Ann’s refrigerated truck and taken to the scheduled delivery sites for member pick-up.   Cape Ann runs on a five day delivery cycle and provides 700 summer members with their fish.
Tousignant says, “We pay the boats a higher price than they would receive at auction, on average about 50% more.”  Fishermen are encouraged to diversify their catch according to the conditions of the ecosystem, which promotes sustainability.  Cape Ann handles about seven to eight kinds of fish from the Gulf of Maine; haddock, cod, pollack, ocean perch, also known as red fish, monkfish and flat fish such as yellow tail.
The Cape Ann metric which makes the business ‘economically viable’ requires forty subscribers for bi-weekly deliveries of at least two pounds of fish and an additional eighty members for weekly drop-offs.
Meredith Lubking, Social Enterprise and Local Foods Initiative Manager for Community Servings, in Jamaica Plain, a part of Boston, is heavily involved with Cape Ann.  She organizes one of the nineteen subscriber pick-up sites.  This week she is distributing pollack for Cape Ann and at the same time, she is handling the extensive produce that is delivered by CSA farmers from outlying communities for their members, some of which overlap as Cape Ann subscribers.  She calls Cape Ann, “absolutely consistent and reliable.”  She says that perhaps “three of four times a year the boats can’t go out because of weather and they will call and cancel ahead of time”.  She smiles thinking of the emails she gets from subscribers asking for the “name of the boat the fish came in on.
Meredith distributes the fish which has come off the day-boat within the previous 24 hours, from 3-6 p.m. on Tuesdays at her site. If the subscriber does not arrive, that order is donated by Cape Ann to Community Servings which distributes 750 meals a day to the critically ill, their families and/or caregivers within a hundred mile radius.

Steve Tousignant says that one week in early August, (a time when many people vacation) for example, twenty five pounds of their fish were donated to one of three food pantries.
Cape Ann operates on a twelve week share-purchasing schedule.  In addition to the various white fish, they also offer Gulf of Maine shrimp and mussels.   Beginning with the winter cycle, Cape Ann will offer a Saturday pickup once a month at the Pawtucket RI farmers’ market at which subscribers will be able to receive five pounds of peeled, uncooked Maine shrimp, which will be vacuum sealed and frozen in one pound bags.  During the five-month subscription period, they will get 20 pounds of shrimp, and each share will be priced at $150.
When questioned about Cape Ann’s growth plan, Tousignant responded, “We’d love to bring fresh seafood to as many places as we can.  We are in preliminary conversations with the western part of the state.  But we are interested in controlled growth.  Undoubtedly we can create more jobs, and strengthen the local economy”.
Cape Cod CSF 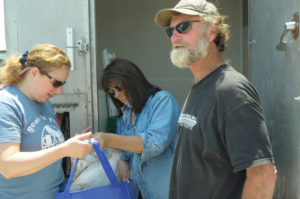 Meri Rapzel is one of four proprietors involved in Cape Cod CSF, which differs from  Cape Ann in that it’s a for-profit model. She is a self-described “food activist” who once worked for Marine Fisheries.  She comes from a CSA market garden background, on a farm in New Hampshire.  “I am now working with the fishermen and local food groups trying to bring everyone together”.
Meri speaks of Shannon Eldredge and her daughter who come from a historic fishing family in Chatham, one of the few remaining trap or weirs fisheries.  Weir fishing is best described as a “whole empoundment set up on Nantucket Sound so that fish will swim right into nets and will continue to swim.  When weir poles come down and nets are removed, those fish are back out.”  She is referring to fish, such as scup, mackerel, butterfish, and squid.   Fishermen take a dory into the actual empoundment.  They take what they need, within the quota regulated by the state.   The fishermen have dedicated a portion of the catch to the CSF.
The fourth proprieter is Linda Kelley of George’s Fish Market.   She is the person “who lands all the fish” because she is a dealer and the fish are regulated through a dealer. Mary says, “The fishermen get a better price, usually $1.00 over the auction price. Linda is landing 100 pounds a week.”
In contrast to other CSF models, Meri says, “we have one location on the state harbor dock in Chatham.  We are trying to preserve ‘community fishing’ which has existed on Cape Cod for hundreds of years.  Ours is a large education piece for CSF subscribers.  With a smaller subscriber number we are teaching people how to process the whole fish (we do not offer fillets) with information, videos, and demonstrations.”  An example that Meri uses is squid which “can be cooked for 60 seconds in a hot pan or thrown into Portuguese stew for two hours.   We are teaching people about species, how to handle them in the kitchen and different options for cooking.”
For summer season share holders who often don’t understand that fish is “terribly seasonal” says Meri, Cape Cod CSF is offering White hake, pollock, haddock and some cod.
This is Cape Cod’s second year as a CSF and the first year of three season shares.  “We are picking up four members a week through word of mouth,” says Meri.  In terms of cost, Cape Cod provides only whole fish for $150 per five- week cycle.  There are two other available options.   A subscriber can select two lobsters and a half pound of scallops.  That combination is a $150 for five weeks.  Another option is a five-week combination of fin fish and scallops for $175.
Meri signs off, saying “We are trying to be fish mongers reacquainting people with their food.”
In conclusion, it is not surprising that community supported fisheries are new to so many of us given the relatively short time they have been in existence.  Under the CSF umbrella the emphasis is on community, forming community and informing community.  Most of us know precious little about fish and the people who go out year-round and face the climate and oceanic challenges to do what they love and to bring us fish that many of us love.   To see people picking up their weekly catch along with their fruits and vegetables from other local CSA farmers at the Community Servings distribution center was a celebratory occasion.  The sights, sounds and smells together with the smiles made this experience a ‘ten.’