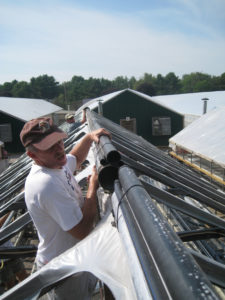 Unfavorable weather is an unpredictable challenge for farmers often leading to financial instability.  Growers are turning to greenhouse production to reduce their losses from poor weather and to increase the length of the growing season. Though plastic hoop houses are inexpensive to erect, they demand large amounts of energy to keep them warm, especially in northern climates. Scientists from the University of Vermont have teamed up with several engineers and Chris Conant, from Claussen’s Greenhouses and Florist in Colchester, VT, to test two energy-saving devices in his traditional plastic covered greenhouses. 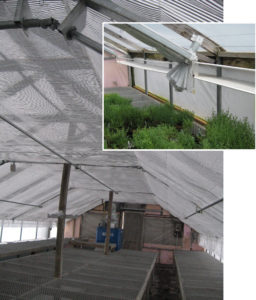 Thermal curtain in the gable-roof greenhouse before it was filled with plants (insert shows the open curtain). Photo by Margaret Skinner

One greenhouse has been retrofitted with an energy/thermal curtain, which is available off-the-shelf (Fig. 1). This technology is in common use, particularly in large gutter-connected greenhouses.  The curtain is closed in the afternoon to hold the heat close to the plants, and reduce the space that needs to be heated.

In an adjacent greenhouse we installed a novel experimental system that injects soap bubbles into the air space between the two layers of plastic that cover the greenhouse (Fig. 2).

Greenhouses are commonly covered with two layers of plastic that are inflated with air, which provides a small level of insulation. The bubble insulation system is reported to increase the R-value for the standard inflated greenhouse from 1-2 to over 30.  The R-value is a term used to rate the insulation potential of a material. The larger the R-value, the more insulation it provides. In 2001, a grower constructed one of the first hoop greenhouses with bubble insulation in Ontario where winter temperatures commonly reach 20 below zero (°F).  He reduced propane heating costs from $1,137 to $146 per year and extended greenhouse production from 6 to 10 mo. We are testing this system and will compare heating costs for the thermal curtain greenhouse with the bubble greenhouse and a standard greenhouse with no improvements.

The bubble insulation system is not new. Over 20 years ago researchers from the Univ. of New Hampshire tested it, but ran into many problems. The foam solution leaked out or froze up slicing holes in the plastic. The freezing problem has been solved with the development of a new foam solution and leakage can be minimized by carefully making sure the plastic coverings are secure at all contact points. More recently Sunarc, a Canadian company, developed a bubble system for gutter-connected greenhouses, but it is not fully operational nor commercially available. We were fortunate to be able to obtain a prototype of their system to retrofit for smaller hoop style greenhouses that are more common in the Northeast. 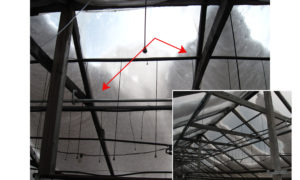 Bubble system in operation, filling void with soap bubbles. Arrows indicate stream of bubbles generated at the peak of the greenhouse. Photo by Margaret Skinner

SunArc, a company located in Canada, expanded and improved upon the concept (www.sunarc.ca/english/home.html), and until recently marketed the technology in the US and Canada. Economic constraints linked with the recent financial crisis led to downsizing Sunarc, though rights to the system have been shared with a company in Israel, where it is being developed as a means of shading. While this technology is not currently available commercially, given the steadily increasing cost of fuel, we believe the work we are doing to test the system in hoop houses will revive interest and lead to its expanded commercial use by growers.

The energy curtain was installed in October 2010, in time for testing during production of the fall poinsettia crop and Chris Conant was extremely pleased with the system. Over the entire cropping season (Oct. – Dec.), he used half as much natural gas in the greenhouse with the curtain than in the standard unimproved house.

Installation of the bubble system has taken time because a standard system suitable for a hoop house does not currently exist, and the equipment we obtained from Sunarc required major retrofitting (Fig. 4). 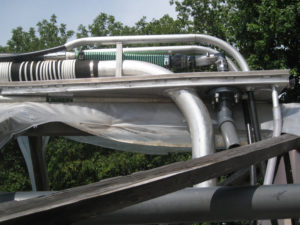 Piping system developed by Sunarc to inject soap bubbles between the two layers of plastic. Photo by Margaret Skinner.

Drs. Bruce L. Parker and Margaret Skinner are professors at the University of Vermont Entomology Research Laboratory in Burlington, VT.  For more information they can be contacted by telephone at 802-656-5440 or by email at bparker@uvm.edu or mskinner@uvm.edu. Additional information about their research is available on their website.

Acknowledgments: This project is supported with funding from the NE Sustainable Agriculture Research and Education Program (SARE), University of Vermont College of Agriculture and Life Sciences, and the USDA Natural Resources and Conservation Service Conservation Innovation Program.

Drs. Bruce L. Parker is a professor at the University of Vermont Entomology Research Laboratory in Burlington, VT. For more information they can be contacted by telephone at 802-656-5440 or by email at bparker@uvm.edu
Posted in Small Farms Quarterly