Home » Posts » A Memoir: The Milk Must Get Through

A Memoir: The Milk Must Get Through 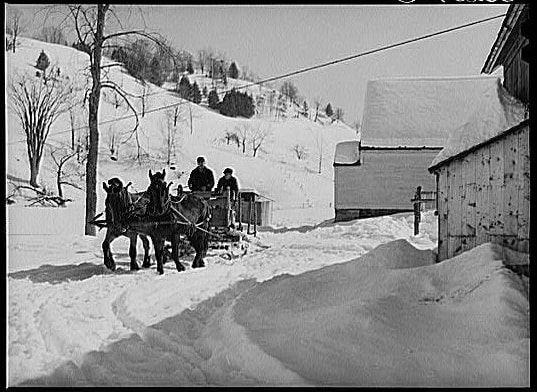 During blizzards, dairy farmers hauled milk to village plants on sleds, pulled by tractors or teams of horses. Courtesy of the Library of Congress.

One morning when I was about 9 years old, I woke to a snowstorm that crept in during the night.  When that happened, in the Central New York winter months, during the late 1940’s, the first thing families did was to turn the radio on to hear if school was cancelled.  Yes, this day would be a snow day.

The blizzard lasted several days, closed schools and caused havoc with local dairy farmers that needed to transport their raw milk to a milk plant in our village – Clinton, NY –
The Queensboro Milk Processing Plant in the village of Clinton accommodated the many dairy farmers operating in the surrounding area.  The milk from the farms was routinely transported to the plant, processed and then carried by bulk transport – tractor trailers- to bottlers.  It was critical to get the milk from the farms in a timely manner to avoid spoilage.

Trucks that normally transported milk from the farms to the milk plant could not do so during the multi-day storm.  At the time, milk was stored in metal “milk cans” with snug fitting tops.  Instead of trucks, the dairy farmers hauled the filled milk cans on sleds, pulled by tractors for those who had one or by teams of horses for those who didn’t. Farmers shared equipment to make sure all milk got to the plant.

This storm had an impact on small dairy farmers: interrupting the normal milking process, requiring extra time away from the farm to deliver the milk to the station and the extra effort required to handle large amounts of snow around the farm. Whatever price they were paid for their milk, it probably wasn’t enough!

Some of us came up with a different idea.  We could ride farmer sleds used to transport milk to the plant during these weather conditions. In the mornings, after donning warm clothing, two or three of us would muster somewhere near the milk plant to ask drivers hauling milk if we could ride back to the farm with them after emptying their milk cans, providing they were going to make another trip back to the milk plant that day. If they agreed, we would hop onto the sled for a fun trip out to the country. The trips were long and the snow blew so hard on the open back of sleds that it would cake onto our scarves, hats and coats. These cold conditions did not matter for kids our age; it was something different to do.

At the farm, we would help re-load milk cans and then return sometime in the afternoon by sled on the way to the milk plant in the village. I do remember one time we ended up having to walk back to the village because for some reason the farmer could not make the return trip as planned.  That resulted in a very long exhausting trek back to the village through rather deep snow.

This creative way to spend time off from school only lasted until snow plows could clear the snow-drifted country roads. However, for that short time it was an exciting way to be outdoors riding sleds….and not have to pull them back up a hill!