Juneberries – They Go Where Blueberries Can’t

Many small farm operators and fruit enthusiasts see blueberries as Plan A.  We all know that blueberries are popular, tasty, and they practically market themselves.  But if you do not have very well-drained, acidic soils, you have to go with Plan B.  It would be great if there was a productive berry that very much looked and tasted like a blueberry, but was not so fickle about soils.  That’s where juneberries come in.  And it turns out, juneberries have several advantages over blueberries. 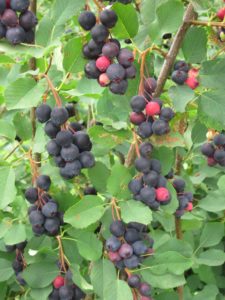 The juneberry (known commonly elsewhere as a “saskatoon berry”) is a dark-colored fruit that is grown on the Canadian prairies for wholesale processing, with some fresh market and you-pick sales.   The species of commercial interest is Amelanchier alnifolia, a close cousin of our Eastern serviceberry (Amelanchier canadensis), which is found as a tall shrub in our local forests.  Juneberries are currently considered an “uncommon” fruit with virtually no commercial cultivation in the Northeast US.  In comparison, juneberries are grown on almost 900 farms covering more than 3,200 acres of production in Canada.
Juneberries are an early season fruit crop with self-pollinating, frost hardy flowers.   Mature fruit is ready for harvest 45 to 60 days after the very early bloom; they ripen in mid-June to early July in most parts of New York State.  This medium-sized shrub tolerates a wide range of soil pH conditions (4.8 – 8.0) and soil textures (coarse sand to silty clay).  They will not tolerate soggy ground or standing water, but will tolerate many of the soil types unsuitable for blueberries.

The juneberry is native to North America, more particularly to the upper Midwest and northern prairie region of Canada – a bitterly cold and dry climate with low-fertility soils.  The Northeastern climate appears to be favorable for juneberry production, although high humidity can lead to problems with powdery mildew and fungal diseases on young plants.
The ripe juneberry fruit is dark purple, with several tiny soft seeds, and very closely resembles a highbush blueberry.  The fruit is best eaten fresh, but even after prolonged freezing, it retains its firmness and overall shape without becoming mushy.  Juneberries have a flavor reminiscent of dark cherries or raisins, and is generally milder than blueberries.
Nutritionally, juneberries seem to be naturally designed for athletes more than anything else:

They key to successful establishment of a juneberry orchard is thorough weed control.  Having evolved in a fire-oriented ecosystem, juneberries need two or three years of zero competition from other plants while they become established. There are many ways to maintain this “barren soil” environment, and black fabric mulch appears to be best (you know – so it looks as though a prairie wildfire had swept through).
With all these great features, juneberries are primed to grow from a minor berry to a more common high-value fruit crop in the coming years.  Consumers are ready for a new fruit, especially one with a familiar and appealing taste.  During a juneberry tasting session, we received many positive responses from more than 1,500 samples.

If you want to get juneberries in the ground, start by developing your rows well in advance of ordering or delivery.  Rows should be spaced 10 – 12 feet apart, planning for about 4 feet between bushes.  The first crop will be ready three years after planting, and bushes will yield 4 – 6 pounds of berries annually.

Plant material for small-scale commercial plantings can be hard to find, since it is a new crop.  Most plants are currently purchased from Canadian nurseries, but several Michigan-based operations are increasing their inventory of juneberry plants.
Cornell Cooperative Extension of Ontario County is leading a detailed project to give small-scale fruit growers a realistic sense of the agronomic suitability of juneberries and how well this crop might or might not go over with consumers.  The project has been made possible by the Northeast Sustainable Agriculture Research and Education program (NESARE).  Four farms signed on to provide testing grounds for more than 400 juneberry plants of four different varieties.

Jim Ochterski is the project leader to introduce juneberries in the Northeast.  He is based at the Cornell Cooperative Extension office in Canandaigua, NY (Ontario County) and has an ongoing interest in sustainable, native crops with significant commercial potential.  Jim can be reached at 585-394-3977 x402 or jao14@cornell.edu.
Posted in Small Farms Quarterly