Home » Posts » Changing the Face of Agricultural Landscape: One Gas Well at a Time

Changing the Face of Agricultural Landscape: One Gas Well at a Time 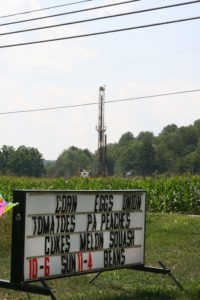 Natural gas leasing is now the number one rural land-use issue in PA and NY. Photo by Sue Smith-Heavenrich

You don’t need to lease your land to feel the impacts of industrialized gas drilling, which is now happening over much of New York and Pennsylvania.  Just ask John Lacey who, for 30 years, served as an agricultural land resource specialist for NY State Dept. Agriculture and Markets. Every farmer needs to understand the potential impacts that drilling and pipeline construction can have on agricultural lands, he says.
Until the 1970s gas drillers and pipeline companies didn’t show much concern for the land they used, Lacey says. They left fields with depressions where a pipeline trench subsided, dead zones polluted by residual salt from a brine spill, or pipelines buried so close to the surface that farmers couldn’t plow or cultivate.
Things have changed for the better, he says. Pipelines are buried deeper now, but even the most careful operators can spill chemicals that contaminate water and soil. And there are other impacts on agricultural land, Lacey notes.
Once energy companies have developed wells capable of commercial production, they’ll need to build gathering pipelines to convey the gas to market.  These pipelines will cross a number of parcels; even landowners not involved in a drilling unit may be affected by pipeline construction.
Protect your soil
“You need to have a good understanding of your soils and the way they drain,” Lacey tells farmers. While the valleys are made up of gravelly soils that tend to drain well, the hills are covered with a thin topsoil layer. Farmers must insist that, before drilling or pipeline construction begins, their topsoil is scraped to the side and piled in a berm. Only after the construction is completed and the area de-compacted should the topsoil be replaced.
The biggest issue with NY soils, Lacey says, is the impermeable “fragipan” –  a silty-clay subsoil layer with low fertility. Pour water onto soil and it percolates downward until it hits the fragipan – then it begins to flow horizontally.
What this means for pipelines is that water flowing horizontally along the fragipan layer will pool in the trenches. Left unaddressed, this will create chronic drainage problems for a field or right-of-way through forest.

1. Strip the topsoil and store it in a berm.
2. Allow a right of way wide enough to allow for the segregated storage of the topsoil, the trench spoil, and truck traffic. This may mean a temporary right of way up to 60 feet wide for a small gathering pipeline, and up to110 feet wide for a major transmission pipeline, during the construction phase.
3. On sloped land make sure there are durable sandbag “trench breakers” placed sufficiently along the trench to control water from following the excavated “path of least resistance” and preventing “blowouts” down the hill.
4. Make sure the exposed subsoil is ripped and de-compacted before covering it with the protected topsoil. Also they should pick up and remove all the larger stones and rock material lifted up during the ripping, prior to replacing the topsoil layer.
5. After replacing topsoil they should go over again with a deep subsoiler. When finished, you should be able to easily penetrate the soil at least 18 inches below surface.
Best mitigation practices for agricultural landscapes are discussed in the publication, Pipeline Right-of-Way Construction Projects: Agricultural Mitigation through the Stages of Project Planning, Construction/Restoration and Follow-Up Monitoring available online at http://www.agmkt.state.ny.us/ap/agservices/WEBAPConstrGuides.pdf

Many of the problems that Lacey has documented resulted from misunderstanding the soil drainage qualities and regional climate. Pipeline consultants from the south and west don’t understand that the SWCD map indicating “moderately drained” soil type refers to the root zone for crops, not the depth required for pipeline excavation, he says.
The northeast often receives three inches of precipitation a month, so it’s hard to find an extended period of time for construction when the soils aren’t excessively moist. Even in winter the soils are subject to periodic thaws. “That makes them too wet and vulnerable for the type of traffic that drilling and pipeline work require,” Lacey explains.
Lacey also emphasizes the need to continually monitor and inspect the activities surrounding drilling and pipeline construction on the farm. This may mean checking everything from the numbers imprinted on drainage pipe to making sure that workers don’t pad the pipeline trench with valuable topsoil.
Protect your timber.
“Natural gas leasing is now the number one rural land-use issue,” says Brett Chedzoy, a regional extension forester with Cornell Cooperative Extension of Schuyler County. Without proper lease protections, forest owners face potential losses in terms of timber, wildlife habitat and other property uses.
If a gas company wants to use your land for a drilling pad or as a pipeline right-of-way, they ought to pay fair value for all the timber they remove. Even young successional forests have value, Chedzoy points out. An 8-inch tree may have current value only as firewood, but if left for another 50 years it would have significant value as a saw log.
“Make sure you specify that the trees be cut by a logging crew and piled in an accessible location,” Chedzoy warns farmers. Too often energy companies use bulldozers to clear land, leaving trees mixed with stones and debris and unacceptable to mills.
As with fields, forest owners will want to protect topsoil, restore drainages, and control erosion. Once construction is completed, the soil needs to be de-compacted. Then the topsoil should be replaced and – especially if the area will be maintained by brush-hogging – make sure that the rocks and stones are picked out 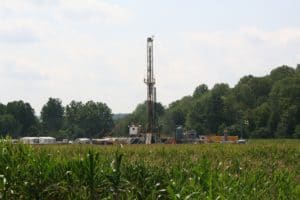 Marcellus drilling on a farm near Towanda, in Bradford County PA. Photo by Sue Smith-Heavenrich

Usually the companies re-seed the area with a conservation mix, Chedzoy said. Forest owners may also want to consider shooting chopped straw or hay to mulch the area, and putting in water bars or other erosion control measures.
Protect your woodland
Right-of-Ways (ROW) are the number-one entry point for invasive species. Once you take out the trees, you create an “edge” – an opening preferred by such invasive species as European buckthorn, multifloral rose, privet, several Asian species of honeysuckle, burning bush, Japanese barberry, autumn olive, swallowwort, Oriental bittersweet, and garlic mustard.
The problem with invasive species is that they interfere with native plants and degrade the wildlife habitat, says Chedzoy. Buckthorn, for example, displaces other berry-producing shrubs such as Viburnums, Amelanchier (service berry), raspberries and blackberries. Unfortunately, buckthorn fruit has a cathartic effect on wildlife that causes them to vomit the fruit without deriving much nutritional value. That helps the buckthorn disperse its seed, Chedzoy says, but offers little benefit for the wildlife.

The loss of current and future timber should be appraised exclusively by your Forester
Cleared timber should be harvested by conventional logging methods and left neatly piled in designated areas if to be later sold or utilized. Otherwise, the timber should be chipped or removed from the site.
If you are currently enrolled in the NYS 480-A Forest Tax Law, conversion penalties should be paid by lease holder. If you are contemplating enrollment in 480-A, will you still qualify if additional forest land is cleared?
Outline penalties and provisions for non-compliance, such as failure to re-vegetate temporary worksites, damage to unmarked trees, delays in completion, erosion damage, and spills.
Require a performance bond with your Forester as the final authority on compliance.
Require the lease holder to construct at least one permanent crossing in a designated location if you expect to someday cross the pipeline with heavy equipment.
Consider what can be done to minimize the impact on wildlife habitat.
List measures to reduce the establishment of invasive plant species near disturbed areas, such as planting screens along cleared edges.
Taken from Brett Chedzoy’s fact sheet, Gas Rights and Right-of-Way Leasing Pointers for Forest Owners (pdf) available online at http://gasleasing.cce.cornell.edu/

Invasive plants also affect the quality of the forest. The more competitive invasive plants may shade or crowd out the existing seedlings and saplings, changing the character of the woods. Or, like garlic mustard, they may produce chemicals that inhibit seed germination.
A pipeline right-of-way may create other problems for forest owners, such as access for logging operations. Trespass liability has become an issue as well. Many forest owners have complained that pipeline ROWs become conduits for ATV and snowmobile traffic.
Protect your agricultural landscape
Like forests, agricultural land can be fragmented due to gas well development. NY Ag and Markets Farmland Protection Program Manager David Behm is concerned about preserving agricultural land for future generations. He questions whether conservation easements will be strong enough to protect farmland in the face of a natural gas rush.
A conservation easement is a legal document that is written in the form of a deed, Behm explains. It permanently restricts the future development of a piece of property for the purpose of preserving or maintaining the scenic, open, historic, agricultural, or natural condition, character or significance of that property.
While a single gas well on a farm doesn’t seem like a huge impact, Behm is concerned about the cumulative affect of gas development. He believes that access roads to well sites will fragment the agricultural land. Anytime there’s a road dividing a field, agricultural land is at risk, Behm says. Access roads that cut off a couple acres from a larger field put the smaller pieces at risk for development.
Sue Smith-Heavenrich is an independent journalist who writes about agriculture and environmental issues for regional and national publications as well as Marcellus Effect (http://marcelluseffect.blogspot.com). You may contact her at sueheaven@gmail.com or 607-659-3022.
This article was originally published in Organic Farms, Folks & Foods in summer of 2009 and is reprinted with permission.