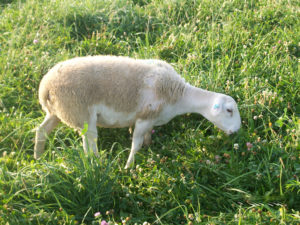 Legumes like white and red clover as well as Birdsfoot Trefoil are highly nutritious and palatable. Photo by Ulf Kintzel

For a sustainable grazing system, one should have legumes in the pasture. Legumes have the capability of fixating nitrogen from the air and thus reduce or even eliminate the need for nitrogen fertilizer. To accomplish this, the pasture must contain at least 30 percent of legumes. I prefer 50 and up to 70 percent of legumes in the pasture. Legumes are also highly nutritious and remain palatable when grass doesn’t. However, most legumes like clovers and alfalfa (and with the exception of Birdsfoot Trefoil) have one big disadvantage: They cause bloat. Bloat is defined in this case as a forage causing the buildup of gas in the rumen. That gas cannot be released and expands to the point that it pushes onto the diaphragm, making it difficult to impossible for the animal to breath, and on occasion it suffocates.
Many articles have been written about how to prevent bloat. Often times I have found that the advice given was not based on experience and proven to be ineffective. In this article I will describe what I found over the course of more than 25 years that works or doesn’t work.
The most important approach in dealing with bloat is preventing it rather than treating it. Not every part of the legume plant causes bloat equally. The more fibrous parts of the plant are not likely to cause bloat, but the young leaves are. In addition, there are times and conditions when the same stand of legumes is more likely to cause bloat than at other times.
A young stand of legumes that lacks fiber and is just a few inches or less high is something that needs to be avoided. Letting the stand mature will increase the amount of fiber. Additionally, it is harder for the sheep to eat fast when the plants are taller. Fast or hasty eating aids bloat. In case of alfalfa the rule of thumb is letting it bloom. Red Clover can also easily grow taller before pasturing. White Clover on the other hand is a lot harder to deal with since it never develops much fiber and also matures at different times in a stand. 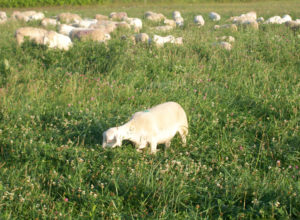 The high legume content in this pasture eliminates the need for nitrogen fertilizer. Photo by Ulf Kintzel

In a rotational grazing system it is up to the manager to determine the size of a grazing cell and the time the sheep spend in it. A small grazing cell in which all animals just fit in without leaving much additional space assures that the sheep will have to eat all of the plant, including the parts with more fiber. After eating the cell down, the sheep should be immediately moved to the next cell before they get hungry again. Smaller grazing cells also prevent the sheep from rushing around, looking for the tastiest plants, and thus prevents the sheep working up a higher heart rate which also aids bloat. In fact, any rushing and hastiness should be avoided when facing the possibility of bloat.
The single most important advice I can give is this: Keep the sheep full! Full sheep will never have enough room in the rumen to eat enough legumes that cause enough development of gas to kill it. Full sheep are not likely to eat hastily or rush around in order to find tasty yet dangerous leaves of clovers.
What I found that does not work with sheep is hay feeding before pasturing them. Well pastured sheep will not touch the fanciest hay when they know they will have lush pasture available in just a little while. The little hay they may eat will not prevent bloat. In fact, trying to force them to eat hay while they know they go on pasture soon may just pen up their desire to eat until they come onto the pasture. A free choice hay feeder in the pasture will be largely ignored, even if it is filled with nice alfalfa hay.
It also does not work to wait until the dew has dried off of the pasture before letting them into the field. While it is true that dew as well as rain and also wind aid the development of bloat, keeping the sheep off pasture and letting them get hungry is far worse. You are better off entering the pasture in the evening. When the dew comes in the morning the sheep will again be simply too full to develop bloat.
What do you do when bloat happens anyway? You will find that only a few animals will get bloated. If the bloat does not kill these particular animals the first time around you will notice that every time thereafter it will be the same animals that will bloat. I suggest culling these animals if they are clearly the ones getting bloated when other don’t show any signs at all. The use of legumes should not be determined by the few animals that are prone to bloat.
I have applied almost every application of treatment there is. I have caught sheep and massaged the rumen while holding my thumb of the other hand in the sheep’s mouth to cause the gas to exit. I have used special designed meds and oils given orally to cause the same. In rare cases I have used a trocar or knife to puncture the rumen when the sheep was going to die within the next few moments. All this was done with questionable success. Puncturing the rumen later led to infections and often death anyway. One day an old-time shepherd with 40 some years of experience gave me this advice: Do nothing. The moment you stress them, and stressing them you will when trying to catch them, you will expedite their death by increasing their heart rate. Move the sheep calmly from the pasture that causes bloat, if that is feasible. Let them stand on a hill side which causes the rumen to push back and thus away from the lungs since the sheep will stand uphill, if such hill is right there. Doing “nothing” was indeed the best advice I ever received. I lost far fewer sheep that way in comparison to being very active, trying to keep sheep from dying. That approach takes nerves and yet it really does work.
So, between keeping my sheep full and doing “nothing” when I get some bloat on rare occasions has led to next to no losses due to bloat in the last years. The rare sheep that still bloats is being culled, if I get a chance and the bloat doesn’t beat me to it.
Ulf Kintzel owns and manages White Clover Sheep Farm (www.whitecloversheepfarm.com) in Rushville, NY where he breeds grass-fed White Dorper sheep. He can be reached at 585-554-3313 or by e-mail at ulf@whitecloversheepfarm.com.
Copyright 2010 Ulf Kintzel. For permission to use either text or photographs please contact the author at ulf@whitecloversheepfarm.com.