By Bill Duesing
The following excerpt, “Harvest, October 9 & 10, 1992,” is the second of a series of essays written by Bill Duesing from the book Living on the Earth: Eclectic Essays for a Sustainable and Joyful Future. I encourage you to take in the crisp air of fall, kick up your feet with a hot cup of tea in hand, and ponder the insights that Bill has to offer.
The harvest and cold weather keep us hopping these days. Last week we fought off the frost in our pepper patches with old bedsheets and tarps, hoping for more ripening when it got warm again. Some of the varieties we didn’t cover were barely bothered, especially the ancho, jalapeno, and Argentine purple peppers. In any case, when we pull the plants and hang them up, the fruit survives and will continue to ripen and turn red even if the plants have been injured by the frost. 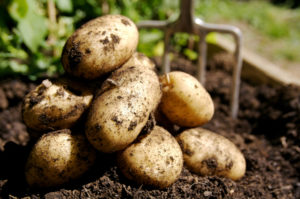 Tomato, cucumber, and squash vines which used to sprawl everywhere, suddenly disappear with the first frost, but the fruit usually is not harmed, though it needs to be harvested before the next frost.
The sweet potatoes were injured first, over 2 weeks ago. They are very sensitive and need to be dug soon after frost turns the leaves black. Of the 3 varieties we grew, ‘Centennial’ was the most prolific, ‘Jewel” produced nicely and ‘Puerto Rico’ didn’t do well, in part because of the cold summer.
One of the real success stories each fall is the Butternut squash harvest. This year, 3 seeds planted in one hill and ignored until harvest produced over a bushel of fruit. There are other squashes we like the flavor of better than Butternut—Buttercup and Delicata, for example. But over the years, Butternut has demonstrated wonderful sturdiness. It resists vine borers and squash bugs, and usually produces lots of those beautiful orange-fleshed tan squash with store so well. 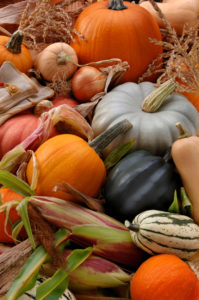 There are other squashes we like the flavor of better than Butternut - Buttercup and Delicata – but Butternut has demonstrated wonderful sturdiness.

We left most of the potatoes in the ground until last week. Besides harvesting the blue potatoes (whose skins have the deep complicated coloration of old fountain pen ink), we harvested Yukon Golds and several hills of “volunteers” which grew from the compost piles. That night Suzanne turned some of the gold potatoes into pancakes, shredding them with onion and garlic, and adding a little flour and a couple of fresh eggs. They were fried in a small amount of oil. Hold the sour cream: we made fresh applesauce from the fruit of wild apple and crabapple trees with a little local honey and a touch of nutmeg. How delicious and healthy too, because those apple trees have never been sprayed. They fruit’s not so great to look at, but it makes a wonderful sauce.
After gardening for years, we realize that in the natural world a blemish-free fruit is the exception. Sure, a good gardener can grow some. But between insects and birds, diseases, weather, and mechanical damage, frequently the fruits and vegetables that are available in the garden have holes or other imperfections. When we cook using fresh produce from the garden, we see how little these flaws matter. The first step in the kitchen, after washing if needed, is usually cutting and if we have to cut out a spot, or bruise, it’s no big deal—just food for the compost pile or chickens.
I thought I’d write something about next Monday’s anniversary of Columbus’s arrival, but I got caught up in the excitement of the harvest and good food. Then I realized that tomatoes and their relatives the peppers, yellow, white, and blue potatoes, the unrelated sweet potatoes (which are cousins to morning glories), beans and winter squash are all plants which originated in what’s now the Americas. We should add corn and sunflowers, among others, to this list. They are all native to the so-called “New World” and, through thousands of years of careful selection and cultivation here, have evolved into important foodstuffs.
These plants in our gardens connect us with over 7,000 years of successful life in this land before the Europeans arrived to find what many of them described as a paradise. Like native food, we find that the culture and traditions of the original Americans have much to teach us.
About a year ago I came across a quote from Kirkpatrick Sale that I thought was very interesting, if somewhat hyperbolic. In The Conquest of Paradise: Christopher Columbus and the Columbian Legacy, he concludes, “There is only one way to live in America, and there can be only one way, and that is as Americans—the original Americans—for that is what the earth of America demands. We have tried for five centuries to resist that simple truth. We resist it further only at the risk of the imperilment—worse, the likely destruction of the earth.”
I’ve thought about this ever since. It seems less hyperbolic all the time.  May you enjoy a bountiful harvest.
Living on the Earth: Eclectic Essays for a Sustainable and Joyful Future includes essays from the first three of the ten years that Living on the Earth essays were aired weekly on public radio from Fairfield, CT. The essays were written by Bill Duesing and edited by Suzanne Duesing. Bill and Suzanne operate Old Solar Farm in Oxford, CT where they produce organic vegetables, fruits, and poultry. The book is available for $10 plus $3 S&H from Solar Farm Education, Box 135, Stevenson CT 06491.