By Debra Welch and Nancy Glazier 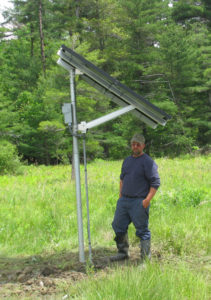 Kevetta Farms, in the hills of Dansville NY, is owned and operated by Kevin and Annetta Herrington with children Jessica and Tyler.  Their high-producing registered herd consists of predominantly Holsteins and Jerseysthat are grazed on 65 acres.  Youngstock are grazed on 15 acres of dedicated pasture.  Kevin has worked closely with JoBeth Bellanca, NRCS District Conservationist, over the past 6 years to implement many conservation practices. The farm also participates in the NY Cattle Health Assurance Program (NYSCHAP), with veterinarian Dr. Rob Wilson from Perry Vet Clinic.
Kevin’s 35 lactating cows are moved to fresh paddocks every 12 hours.  Dry cows, bred and open heifers are moved into the paddock after the cows. No heifers younger than 12 months are grazed anywhere a cow has been due to disease prevention with NYSCHAP . Instead, calves are grazed on other pastures after getting their start in a “training” paddock where they learn to respect electric fence.

Kevin improves his pastures by frost seeding with red clover.  Each pasture has a 26-day re-growth window, although Kevin will adjust this schedule according to actual growth. All pastures are mowed 2 times a year. Kevin discovered that purchased fertilizer did not improve pastures on his poorer soils as much as grazing has.  The presence of cows on these pastures has actually improved the soils through the addition of fresh manure and the action of the herd’s feet. This year, Kevin is beginning to compost manure from the pack barn and will spread it on cow and heifer pastures at the end of the grazing season. This will provide time for the compost to winter over and further reduce any possibility of pasture refusal by the cows. No manure is spread on the calf (12 months and younger) pastures.

Kevetta Farms is owned and operated by Kevin and Annetta Herrington with children Jessica and Tyler. Photo by Nancy Glazier

Laneways between pastures and the barn are important; they should be kept dry. Kevin is planning some improvements to laneways. The plan is to remove topsoil, put down geo-textile fabric, and fill with stone. Kevin found cost-share assistance to fund the laneway project from the Natural Resource Conservation Service (NRCS). Check with your local NRCS to see what cost-share opportunities are available.
Since Kevin’s pastures are all uphill from the barn and the well source, initially he had to pump or haul water daily to watering tubs stationed in the paddocks. Now, however, a solar-powered pump at the top of the hill sends water to a holding tank for the youngstock pasture, and if enough water is available, some of the distant cow pastures.  Kevin is very pleased with this system, which was purchased and installed largely through a grant with Finger Lakes Resource Conservation & Development Council. The area around the pump is a wet area and contains several springs; water collection tiles were installed which lead to an underground holding tank. The collected water is then pumped to another holding tank and gravity fed downhill parts of the farm. 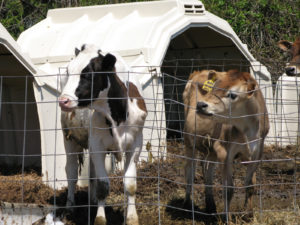 Kevatta Farms’ high-producing registered herd consists of predominantly Holsteins and Jerseys that are grazed on 65 acres. Photo by Nancy Glazier

Cows are milked 2 times a day; grain is fed during milking at a ratio of 1 lb for every 4-4 ½ lbs of milk.  Kevin is in constant consultation with his nutritionist. Overall ration is about 17 to 18% protein. Dry hay is offered free-choice to the cows year-round, but the cows largely reject it in the summer months.  The dairy herd is housed in a bedded pack in the winter months with access to an outside pasture. The herd is fed corn silage and baleage there from a wagon.  The herd prefers being outside even in the winter months; Kevin explains this makes it difficult to justify building a new barn. The pasture gets abused, so it gets seeded yearly with annual ryegrass. He has reduced the size of their outside pasture by half from the advice of the district conservationist. This reduces the risk of runoff reduces the area needing reseeding. The dry hay, baleage and pack bedding are all grown on rented ground, as well as the corn silage; 300 bales of dry hay and 250 tons of corn silage are harvested.  About 500 bales of alfalfa baleage are made on another farm and then wrapped at the home farm.
A great deal of attention is paid to herd health. Kevin stated the herd has few foot problems, and feet are trimmed about every 2 years. To date, none of the cattle have contracted pinkeye. Tails are not docked. No live-born calves have been lost in the past 6 years. Somatic Cell count in 2009 averaged 98,000. The herd has been awarded the Quality Milk Award every year. Daughter Jessica (who Kevin says is great with herd health) has won the Progressive Breeder’s Award for 3 cows; this includes milk production and score. SonTyler’s cow received the Junior Holstein Association National Award for Production – she made 40,000 lbs on grazing – and has always been grazed.  She is currently making over 140 lbs every day, but butterfat is low. This registered herd is also scored, and 23% of the gross income from this herd is generated by cow sales. All breeding is done by artificial insemination, no cleanup bulls are used.  Another benefit of the grazing program, according to Kevin, is cows that have not settled during the winter months are very likely to settle once turned out on grass.
Debra Welch is Agriculture Program Community Educator for Cornell Cooperative Extension Wyoming County. She may be reached at 585.786.2251.
Nancy Glazier is the Small Farms Support Specialist with the Northwest NY Dairy, Livestock and Field Crops Team, Cornell Cooperative Extension. Her office is in Penn Yan, NY and she be reached there at 315.536.5123.