Groundswell Center cultivates the next generation of farmers and food citizens 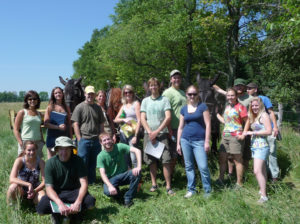 Where is the culture of agriculture? Is it found in homesteads, ranches, and close-knit farming communities in rural America? Can it be glimpsed in farmers markets, community gardens, and country kitchens where families have preserved food together for generations? Has it followed us into the cities, to be reincarnated in urban chicken coops and window boxes? Or has it disappeared along with the small farms and farmers of our nation? And if it has, how can we rebuild it?
Last winter, seeking answers to these questions, I began working with The Groundswell Center for Local Food & Farming in Ithaca, NY. An emerging agriculture education nonprofit following in the footsteps of Growing Power in Milwaukee and Hawthorne Valley Farm’s Learning Center in Ghent, NY, the Groundswell Center involves youth and adult learners in all aspects of sustainable food production.

In 2010 Groundswell launched three new programs: the Finger Lakes CRAFT, the Summer Practicum in Sustainable Farming and Local Food Systems, and the Ithaca Crop Mob. A new USDA-funded New Farmer Training Project is also on the horizon. Each program seeks to educate people from all walks of life in matters of the soil, and in doing so, build community from the ground up.

Participating farms in the Finger lakes CRAFT (Collaborative Regional Alliance for Farmer Training) will begin taking applications for 2011 on-farm internships this winter. Internships are full-time, paid positions on area farms, and typically run from April or May through October or November. In addition to working on their host farm, CRAFT interns will gain knowledge and broad experience through participating in a series of workshops and classes held at other CRAFT farms throughout the season. To receive information about the 2011 Finger Lakes CRAFT program and participating farms seeking interns send an email to info@groundswellcenter.org.

The first CRAFT began in the Hudson Valley in 1994 to augment the training interns were receiving on their respective farms. Every month, a different CRAFT farm sets aside a full day to educate a group of interns. This next generation of farmers are introduced to a diversity of farming operations and management styles, and in the process, connect with other farmers and interns. Since 1994, five CRAFT programs have been established in the country; the Finger Lakes CRAFT is the newest addition.

This first year, our program has 12 participating farms and 23 trainees. One of these farms is Dilmun Hill, Cornell University’s student-run farm. Elizabeth Goodwin, a CRAFT trainee and one of Dilmun’s student managers, feels that participation in CRAFT offers “Dilmuners” a chance to see aspects of farming they wouldn’t otherwise. “We work within certain limitations. For example, we can’t have animals at Dilmun, and there aren’t the same financial pressures, since we’re not dependent on market revenue,” she says. “It’s really important for us to be exposed to farmers who do have livestock, and who are making farming their livelihood, so we get a fuller picture of what farming is.”

Elizabeth feels CRAFT’s education and relationship-building go hand-in-hand. “The philosophy behind CRAFT – connecting people, sharing information, sharing experiences, and getting people inspired to try different things, to start farming – is so valuable for people interested in agriculture. It’s important to have role models as farmers, because that may be something we’re interested in doing someday.” 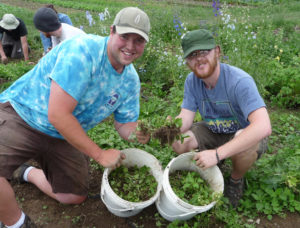 The Summer Practicum in Sustainable Farming and Local Food Systems
School gardens are popping up all over the country. But often, agriculture education is only hands-on until the teenage years. College students of agriculture are taught by professors, not farmers, and often end up more prepared to enter academia than farm fields. Groundswell’s Summer Practicum, a 6-credit college course offered through Tompkins Cortland Community College (TC3), provides an alternative to that paradigm.

“It was the class Ithaca College wasn’t offering,” explains Hayden Ort-Ulm, an Environmental Studies major with a concentration in Sustainable Small Farming as a Business who enrolled in the Practicum. “Working in the field, learning detailed, technical information from plants and harvesting to marketing and maintenance- it just seemed like everything I needed to know that I wasn’t getting elsewhere.”

For eight weeks this summer, Hayden and 13 other Practicum students (a mix of community members and TC3, Cornell, and Ithaca College students) met on West Haven Farm every Monday morning for a full day’s work alongside instructor/farm manager Todd McLane. On Wednesdays, they cooked up locally sourced vittles as part of their “Local Lunch Labs” and were visited by guest lecturers from all sectors of Ithaca’s food system, from Cooperative Extension agents to activists to professors. Fridays, field trip days, were spent visiting and learning about farms and food businesses around Ithaca.

Now that the class is over, many of the students are planning on making food production a bigger part of their lives. Some are thinking about farming; others about homesteading, sustainable food entrepreneurship, and advocacy work. Hayden says he’s considering WWOOFing (Worldwide Opportunities on Organic Farms, a program that allows volunteers to exchange farm labor for room and board) after he graduates.

“I have a real passion for education, for exposing people to agriculture,” says Todd McLane, the primary farm instructor, who taught the course on his day off. “At first I definitely thought, Wow, this is a lot of my time- but the return was so much greater than my effort put in. Just in terms of the work, it was about 420 extra man-hours of work that got done on the farm this summer. And the experience was transformative for the students- it really opened their eyes about the direction of their lives.”
Ithaca Crop Mob 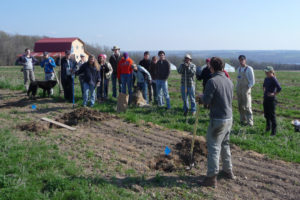 Members of the Ithaca Crop Mob get instructions on planting apple trees from farmer Garrett Miller of The Good Life Farm in Interlaken, NY. Courtesy of Joanna Green.

Our agricultural community includes more than just farmers. So how do we involve the average citizen in her food system? The Ithaca Crop Mob, a collaboration between Groundswell and the Full Plate Farm Collective, is a group of community members- anyone and everyone- that lend a hand on local farms. Each month, between 15 and 30 crop mobbers – wannabe farmers or the simply “ag-curious” – assemble at a local farm to assist with a particularly onerous task. The 4-8 hours these volunteers put in are rewarded warmly with a home-cooked meal prepared by the farmers afterwards.

Crop Mobs began in North Carolina in 2008, when a group of farmers began gathering monthly to talk while working side by side. Eventually, their get-togethers swelled to include anyone interested in farming-for-a-day. It’s been two short years since then, and Crop Mobs have sprung up across the countryside. The Ithaca Crop Mob joins the NYC Crop Mob as the first two groups in New York state.

As one of Ithaca Crop Mob’s organizers, I’ve had the privilege of witnessing the profound gratification that comes with working alongside one’s neighbors to achieve a worthy goal. One of our mobbers likens the labor to a long bike ride, only with a visible outcome- a beautifully weeded field- to appreciate afterwards. Another told us the Crop Mob has given him a reason to get out of the house and into his community. After the Mob helped one farmer harvest garlic, he told us, “Reflecting on the garlic harvest really makes me feel like I have an army or a social movement behind me. Like, it was more than just a garlic harvest but a lot of people coming out to support one another, growing food, living healthily, as one.”

Looking to the Future: The New Farmer Training Project
Thanks to a recently awarded three-year grant from the USDA, in 2011 Groundswell will launch a New Farmer Training Project to support new farmers and urban market gardeners in our region. This program will provide training pathways for serious aspiring farmers from three groups: farming interns, farmers in start-up mode, and urban market gardeners, with a focus on minority and immigrant growers.

The Project will offer educational workshops; a two-year, structured Farm Internship; business planning assistance; and Mentor Training, all of which will connect trainees with successful established farmers. The Project also includes a Farm Business Incubator program on agricultural land owned by EcoVillage at Ithaca, which will provide affordable access to land, infrastructure, and mentoring.

Joanna Green, director of the Groundswell Center, says, “We aim to create a top notch, on-farm training program that will really prepare beginning farmers to launch successful businesses of their own.” Not only will the program serve new farmers, but Green expects it will benefit our whole local community. As serious prospective farmers are attracted to the Ithaca area for its opportunities in hands-on agricultural education, our farms, businesses, institutions and food consumers will all share in the advantages.

The Groundswell Center’s exhortation, “Help us create a truly community supported agriculture,” reminds us that agriculture is not just about plants, but people. Widening our agricultural circles, and providing our farmers and future farmers with opportunities to learn from each other, will strengthen our community and awaken us to our interconnectedness- to the fact that we are all participants in the culture of agriculture.
For more information on the Groundswell Center for Local Food & Farming, visit www.groundswellcenter.org

Rachel Firak is a Program Assistant with the Groundswell Center for Local Food & Farming in Ithaca, NY. She can be reached at: info@groundswellcenter.org.
Posted in Small Farms Quarterly