By Barbara Silvestri
For dairy farmers Tobe and Lena Elmer, farming cleaner and greener has always been a top priority and a source of great pride. Because of their commitment, they have received numerous recognitions for their conservation practices and milk quality.
The Elmers’ To-B-Lea Farm is situated in the southwest corner of Jefferson County in the Town of Ellisburg, New York. The entrance to Southwick Beach State Park on Lake Ontario is less than a quarter mile down the road. “Our proximity to the lake and state park makes us very visible to the public,” commented Lena. “With all the traffic passing by us – campers, lake residents and park visitors – we’ve become more aware of our image and the image we present for dairy farming. We try to keep things neat and clean, as well as focus on our conservation practices.” Tobe added, “It’s important to promote a positive image of farming. Taking good care of the land, water and animals creates a good impression.” 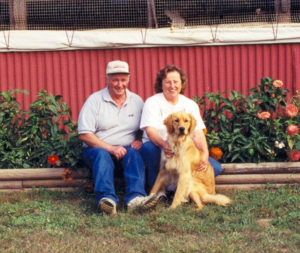 Tobe, Lena and Corky sit among the flowers planted in from of the barn to add a touch of color for the public to enjoy. Photo by Jefferson County Soil & Water Conservation District