Under the Covers: Nursing Clovers to Maturity

Clovers can be wonderful cover crops, growing more than 100 lbs of nitrogen/acre and improving soil tilth with their large root systems, but they get off to a slow, weak start after seeding.  Jerry and Val Carocci, who run Church Street Produce in Burdett, have dealt with this problem by using nurse crops for their clover.

Aptly named, nurse crops provide shelter for baby legumes during their puny stage, when their big bad world is full of heat, drought, and weeds.  As part of the Cover Crop project, funded by Cornell Cooperative Extension and the NY Farm Viability Institute in 2007-2008, the Caroccis have tried two different clover/nurse crop systems, both with success. 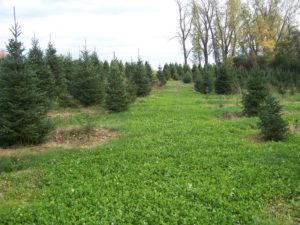 Nurse crops such as oats and buckwheat can help white clover develop into a lush cover.

Clovers seeded by themselves (without herbicides) are quickly swamped by fast-growing annual weeds, particularly when planted in August.  The weed cover doesn’t seem to harm the clovers, which tolerate shade well and actually appreciate the cooler, moister environment down under the weeds, but annual weeds make tens of thousands of seeds before they’re killed by the frost, banking problems for years to come. Also, if perennial weeds are present (like yellow rocket, quackgrass, etc), they won’t be controlled by mowing and will be a much bigger problem than annual weeds like lambsquarter and pigweed.

The first nurse crop combination the Caroccis used was the classic oats and white clover, planted in late summer 2007.  Using 1-2 bushels (35-70 lb)/A oats in combination with 4-6 lb/A white clover is about right—each species pure seeding rate is decreased some to allow the other some space.  Oats have the added benefit of being cheap ($0.11/lb) so the combination cost about $25/A.  The oats grew and provided shelter into late fall, died over winter, and the next spring the field was swamped by a lush stand of white clover.

In 2008, the Caroccis tried a new twist on the old nurse crop concept.  They seeded 50 lb buckwheat and 10 lb medium red clover together in August.  Buckwheat was $0.56/lb, and the clover cost $2.50/lb, so the combination cost $52/A.  One advantage to using buckwheat is that it gives more thorough weed control in warm summer growing conditions than oats.

The soil was warm and the buckwheat took off.  You had to look very closely to find the red clover hanging out in the shade.  Then fall hit, the buckwheat was mowed, and the clover took over.  When the growing season starts, the clover should grow really fast—it’ll be at its peak nitrogen content just before flowering, in early June.  If it’s mowed at that stage it should die, but if it’s mowed earlier it will not have “finished,” and it will persist.

The biggest challenge the Caroccis have had is with their cover crop seeding equipment.  They don’t have a tractor-mounted seed spreader, so they use what Val terms her “Johnny AppleSeeder,” a hand-held spin seeder.  She’s had a hard time getting the seeding rate even throughout the field using that seeder.   Also, they don’t have good tools to help incorporate the seed, and they’ve found their Perfecta field cultivator to be a little too coarse of an instrument in many cases.

Sometimes sowing two different seeds at the same time can be tricky because they might have different ideal rather than to fluff it seeding depths, but in the case of buckwheat and red clover, they’ll both be ok at ½ inch deep.  One can broadcast the clover, then drill the buckwheat with a grain drill.  If broadcasting both seeds, they should be spread in different passes, then pressed lightly into the soil.  A cultipacker is great, but if you don’t have one, a drag works better than a disk.  It doesn’t have to be fancy, an old set of bedsprings dragged behind the tractor even works.  The key to a nice even stand is to firm the soil rather than to fluff it for better seed-to-soil-contact.

We can all use a helping hand, so try nurse crops to get your clover cover crops started.