I was visiting a friend’s woodlot last fall. They had logged much of the ash due to Emerald Ash borer and expanded those openings into patches to allow for replanting with walnut. The understory was mostly buckthorn, ironwood, hornbeam and other scrubby species. They cleared the understory, in anticipation of planting, by either scraping with a bulldozer or cutting followed by spraying. This understory clearing seems excessive…is it? I’ve attached some pictures from this spring. (Mike S., Western Finger Lakes) 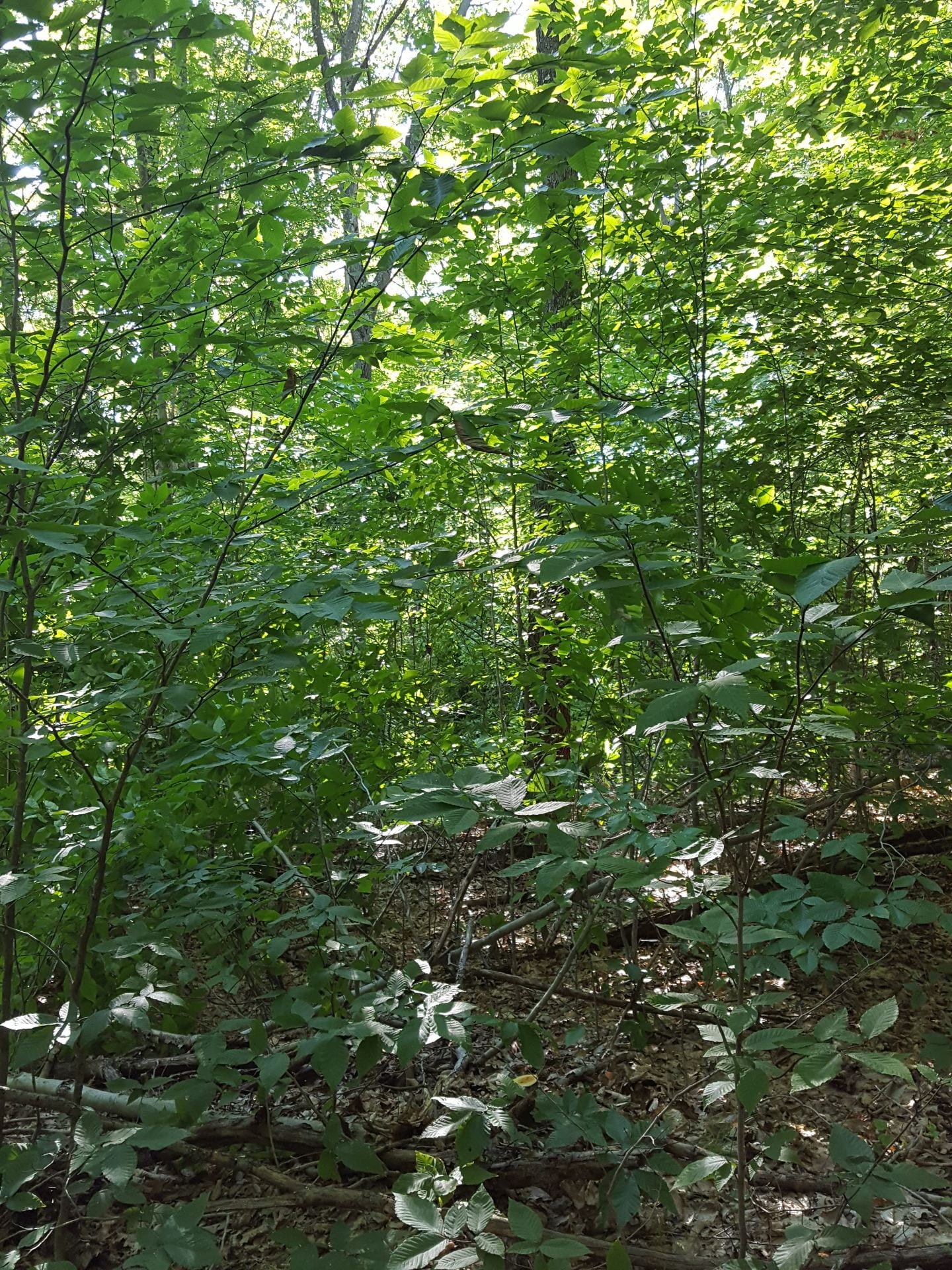 As woodlands mature, or are managed, the increase of sunlight stimulates a subcanopy. Often, due to deer, the subcanopy is of undesired species that create a dense shade and limit other more desired species.
Peter Smallidge / Forest Connect

The establishment of new plants, particularly tree species, requires that sunlight is available at the ground level. Some species may tolerate less sunlight than other species, but most tree species do best with moderately high light levels. The presence of an interfering layer of ferns, shrubs, and small trees which cast shade can interfere with successful regeneration. Those layers will exist and commonly be dominated by undesired species because of selective browsing by deer.

The majority of woodlands in the Northeast and New York originated after the farms of the colonial period were abandoned in the late 1800’s and early 1900’s. The understory in these woodlands was initially vacant but has since increased in recent decades because of increased sunlight to the forest floor. The sunlight at ground level, necessary for plant establishment and growth, has increased because of natural changes in the forest or management activities such as firewood cutting. The mixture of species in the understory in these woodlands is influenced by deer, which selectively browse the species that owners typically desire and leave behind an enduring understory of scrubby undesired species.

Because of understory development, many of our woodlands now have two or more tiers, or strata, of vegetation. The uppermost tier, the canopy, may be 60 to 80 feet tall and dominated by trees that established when the agricultural fields were abandoned. These trees are typically all the same age, though they differ in diameter and height. Many of these trees have ecological and economic values. The recently established understory may form a second tier as a head-high to 20-foot tall subcanopy of trees (e.g., buckthorn, ironwood, hornbeam) or shrubs (e.g., bush honeysuckle, barberry, elderberry). These plants have no economic value though maybe some ecological value. The shade caused by the subcanopy, together with deer impacts, must be managed to allow for the establishment of new and desired plant species.

The subcanopy in most eastern woodlands includes and is often dominated by species that are resistant to deer browsing, tolerate shade, reproduce well, and can grow quickly when there is an increase of sunlight. Numerous species benefited when these woodlands changed to allow for the recent increase in sunlight that favored seedling germination, establishment and growth for those that could tolerate the dappled shade beneath the upper canopy. However, deer selectively browse palatable species, just as we pick our favorite foods at the buffet. As a result the palatable species are diminished through repeated browsing and through the increased shade of the thriving, non-palatable subcanopy species. 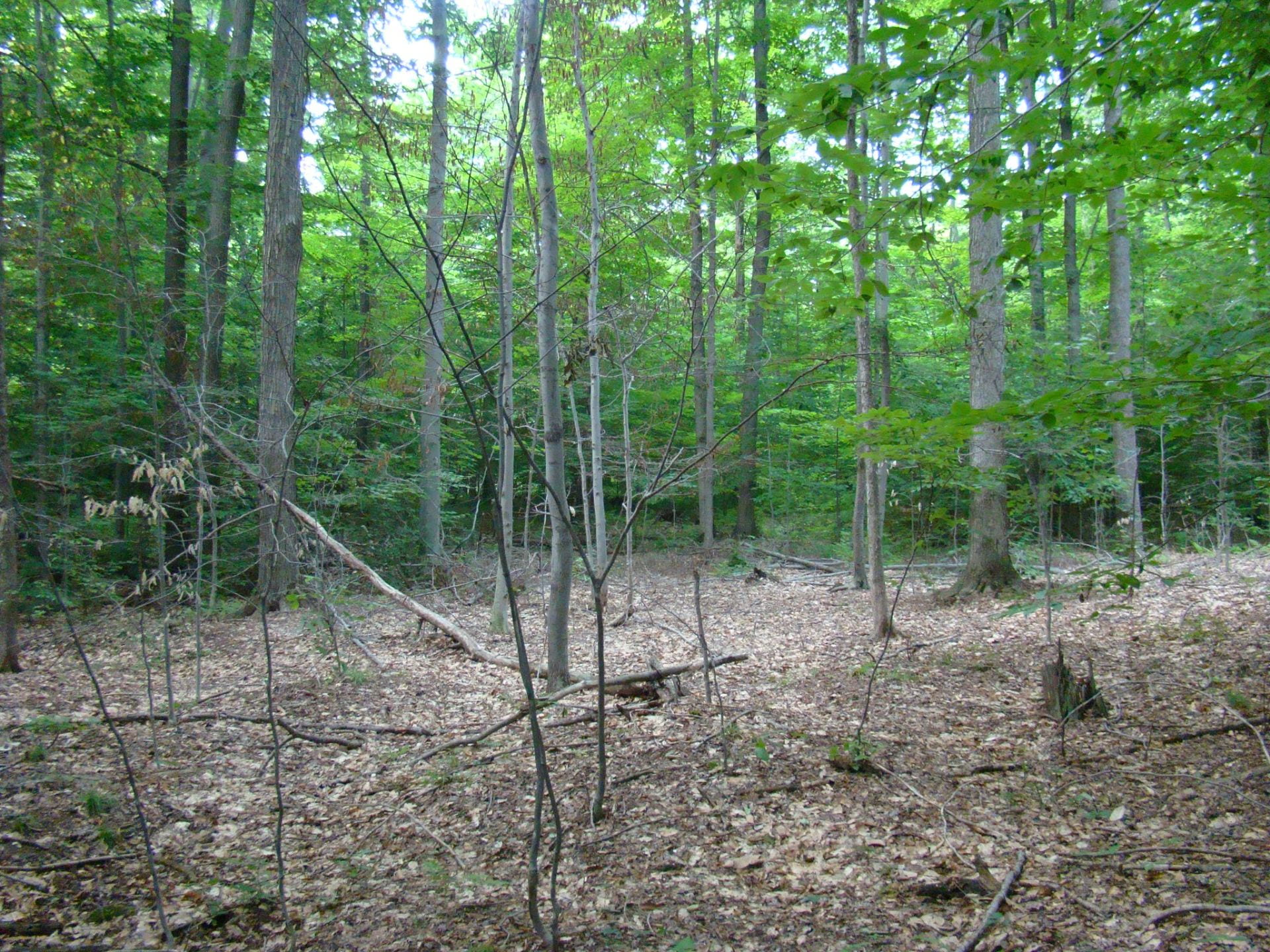 The background of this picture illustrates the upper canopy and subcanopy. The subcanopy was controlled in the foreground, with a significant increase in sunlight to the forest floor.
Peter Smallidge / Forest Connect

One perspective of woodland management is to focus on controlling which species are able to receive sunlight. Because plants need light, those receiving light are more likely to thrive. Of course, plants that require certain soil conditions need to be located on the appropriate soil type. If an owner’s goal is to establish new plants, either by planting or natural methods, then control of vegetation that shades the ground layer is essential. Also, unless the impact of deer that originally shifted the subcanopy dominance to undesired species has changed, then deer impact must also be managed. The subcanopy vegetation can powerfully regulate sunlight, maybe more so than the upper canopy. As an analogy, think about the effectiveness of an umbrella to shield you from rain; the umbrella close to your head offers more protection than an umbrella elevated above your head. Also, as sunlight passes through each vegetative tier, the red wave-lengths, which have the highest energy, are used by that tier. Multiple tiers thus filter most of the useful energy from sunlight before it reaches the forest floor.

A student project at the Arnot Forest illustrated the importance of providing plants protection from deer and access to sunlight. The canopy in the study area was previously thinned and then treatments were applied to the understory to evaluate the survival and growth of desired tree species. If a desired species has protection and equal opportunity for sunlight, it can compete with undesired species. Note that the treatment plots were only 10 ft x 10 ft, so the clearing created lush growth and likely concentrated deer browsing in the cleared and unprotected plots. However, also note that by providing both sunlight and protection, the desired species were most abundant.

Many owners are in situations where they have mature overstory trees, perhaps with ash or hemlock at risk from invasive pests. As previously described, past management or just the maturing of the canopy could increase sunlight and allow for the establishment and growth of a subcanopy. The owner isn’t obligated to cut any trees, but if the canopy trees die then the owner loses the potential for revenue and the dead trees become a hazard for other activities in the woods. There are different silvicultural systems that a forester might suggest to the owner to manage the canopy in these circumstances, one of which is a patch cut or group selection that moves the woods towards a mosaic of variously aged patches.

A patch cut in the canopy is straight-forward as most trees have some value or utility. The subcanopy is problematic because there are typically more stems than in the canopy, but mostly because the understory has no value due to either small size or undesired species. The two most common ways to manage undesired vegetation is with either mechanical or chemical methods, or a combination of the two. A third method, biological, would use intensive rotational grazing with livestock within a silvopasture system; this is uncommon but possible. The mechanical and chemical methods employ a specific technique (examples below) to deliver the treatment. The common purpose of treating the subcanopy is not to permanently annihilate the undesired species, as comforting as that might sound, but to interrupt the success of those species as you establish and grow the desired species.

Any manipulation of established vegetation, even undesired vegetation, will result in a dramatic change and usually visually shocking conditions. While this change is abrupt, and the land appears raw, the process is necessary to shift the balance to the new desired plants. The visual change is also of short duration because our soils and climate are conducive to plant growth that will quickly revegetate the area. This process is the same principle as used by farmers to prepare a field for planting. Farmers and woodlot owners are literally and figuratively “leveling the field” so that the desired plants have an equal opportunity to capture sunlight.

Whether the subcanopy is treated mechanically or chemically, and which technique is used, depends on several factors. Some owners are adverse to the use of herbicides, or have property restrictions that prevent the use of herbicides. These circumstances require the use of mechanical methods. In other circumstances the owner or the contractor have equipment that favors one method and technique over others. Some species are most effectively and efficiently treated with one method versus another method. A matrix to assess your options for strategies to undertake forest vegetation management is available in the publications section of www.ForestConnect.info and described in a recent blog at http://CornellForestConnect.ning.com by searching for “forest vegetation management matrix.”

A feller-buncher can efficiently clear the understory, although it is most commonly used in harvesting larger trees. The cutting head allows for stems to be bunched at specific locations.
Peter Smallidge / Forest Connect

For mechanical control of a subcanopy in a patch cut, the techniques that might be used effectively include cutting, bulldozing, girdling and mulching. Cutting would likely be most efficient with a feller-buncher although it is technically possible to cut by hand with chainsaw or brush saw. Bulldozing would involve pushing the subcanopy stems away from the area to be planted. Ideally the dozer would avoid scraping away the organic matter on the soil’s surface. Girdling might be challenging given the tendency of many subcanopy species to have lower limbs and the number of stems per acre. Also, the death of a girdled tree is sometimes slow and might not offer a timely response for sunlight. The mulching process would use a masticating head, such as on a Fecon or similar machine, to mulch. The mulching could leave a thick layer of coarse organic material that would benefit planted seedlings but potentially impede naturally dispersed seeds. Cutting and dozing would retain the subcanopy stems intact, but dislodged from the soil. For planting after the treatment, the dislodged stems should be aggregated into piles or windrows to simplify access.

For chemical control of a subcanopy in a patch cut, the techniques that might be used effectively include basal bark spraying, mist blowing, stem injection or a combination of cutting following by chemical treatment of the stump. Cutting and stump treatment is the only option to allow for piling or bunching of the stems if the site is to be planted. Stumps might be treated individually with a technique called “cut-stump” or “cut-surface”, or the area might be cut then broadcast sprayed using a technique called “cut-stubble.” Basal bark spraying is effective when there are mostly single-stem plants with a diameter less than 6 inches; plants with multiple stems limit access into the forked area for application of the herbicide. The bark of stems greater than 6” diameter is often too thick for effective movement of the chemical through the bark and into the cambium. Mist blowing the foliage would only be reasonable if the subcanopy allowed for easy access and was less than about 4 to 5 feet tall. Stem injection would not be easy given the abundance of braches common to most subcanopy species. Note that not all herbicides are effective on all subcanopy species, and the herbicides and concentrations used for each of these techniques is different. 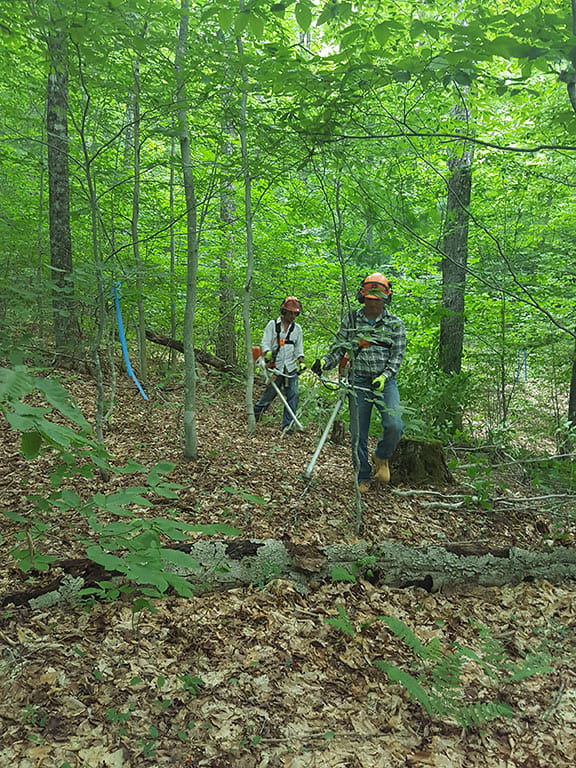 After the subcanopy is treated, the area will begin to regrow from residual plants and seeds. The regrowth following a broadcast treatment such as “cut stubble” will be more delayed because the previous herbaceous and small woody stems were treated. Mechanical techniques will likely have a more rapid regrowth of previously existing vegetation. The selection of the method will thus influence whether additional steps are necessary to ensure the new desired vegetation is able to succeed.

If trees will be planted, there are three key elements necessary for success in reforestation:

This article originally appeared on www.ForestConnect.com, a program project of Cornell University Cooperative Extension and the NYS Department of Natural Resources. Support for ForestConnect is provided by the Cornell University College of Agriculture and Life Sciences and USDA NIFA through McIntire-Stennis and the Renewable Resources Extension Act.