How to provide drinking water for sheep. 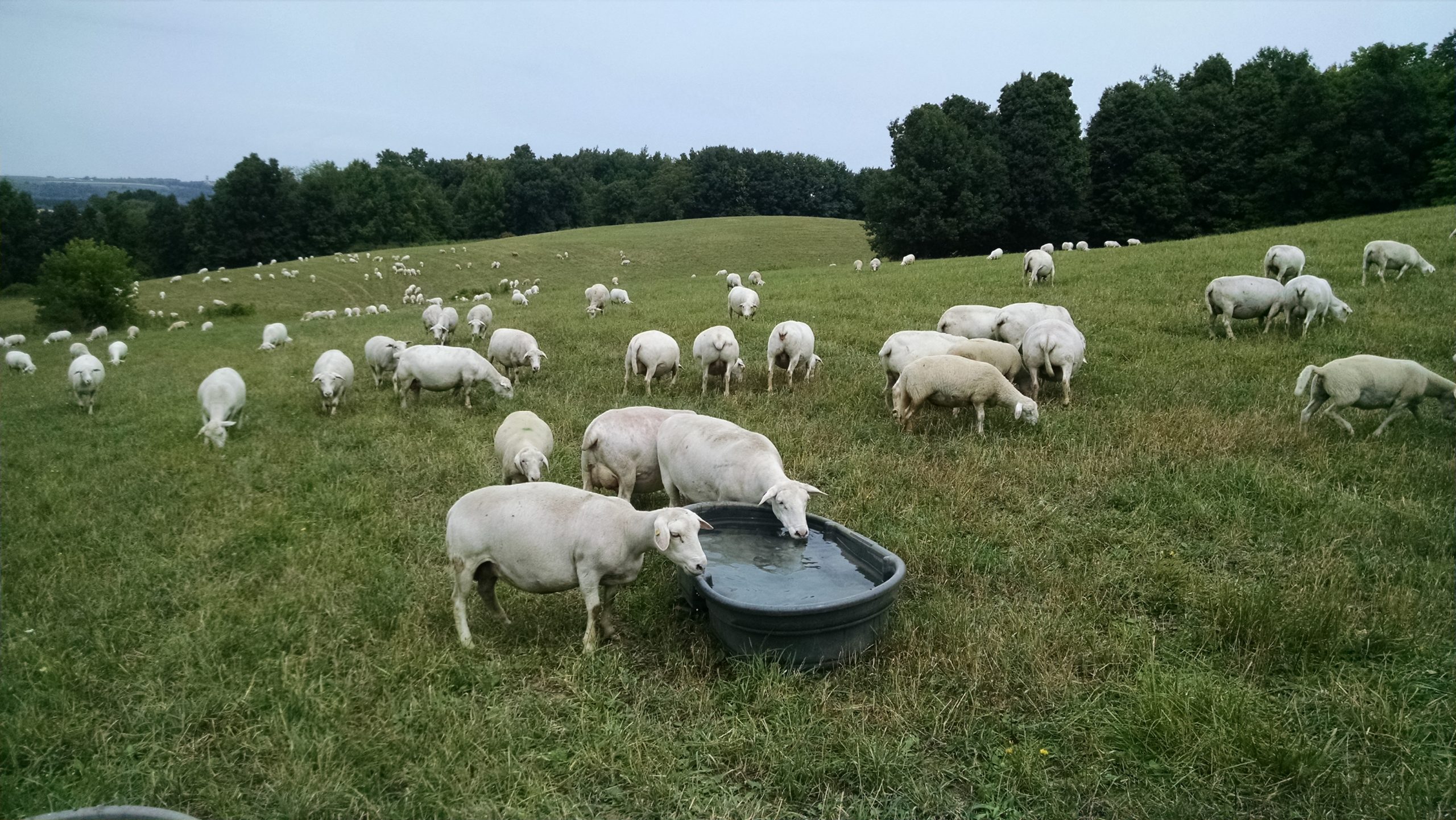 Low troughs are suitable for sheep because lambs are able to reach the water.
Courtesy of Ulf Kintzel / White Clover Sheep Farm

If you have sought any sort of consultation in how to set up a grazing system for sheep, you will likely have been advised to lay waterlines to provide drinking water to the flock. In this article, I will lay out an alternative way to accomplish the same without going through the high expense of paying for permanent waterlines.

Let’s start with describing the water needs of sheep. The water needs for sheep are very low during grazing season when the grass is relatively lush, during wet weather, and when sheep don’t raise lambs. It is entirely possible that my flock of sheep doesn’t drink a drop of water on wetter or cooler grazing days. The need for water increases when the forage dries up, i.e. during a drought, or when hay is being fed in the winter. Likewise, ewes that nurse very young lambs also have a higher need for drinking water. That means, for most of the grazing season the need for water is by a wide margin much lower than for cattle or cows. That should play a big role when planning how to water sheep.

Permanent waterlines have downsides. The cost is, in my view, the biggest one. However, I think waterlines constitute two other significant problems. First, the access points to drinking water are fixed and changes cannot be made easily. If you plan on changing the grazing cell, you are limited because of the access point to water. Secondly, a permanent watering place leads to higher animal traffic in that area and thus puts a higher strain on the sod, especially during wet conditions. There also will be a higher manure concentration than elsewhere. These are all reasons why I opted against permanent waterlines. 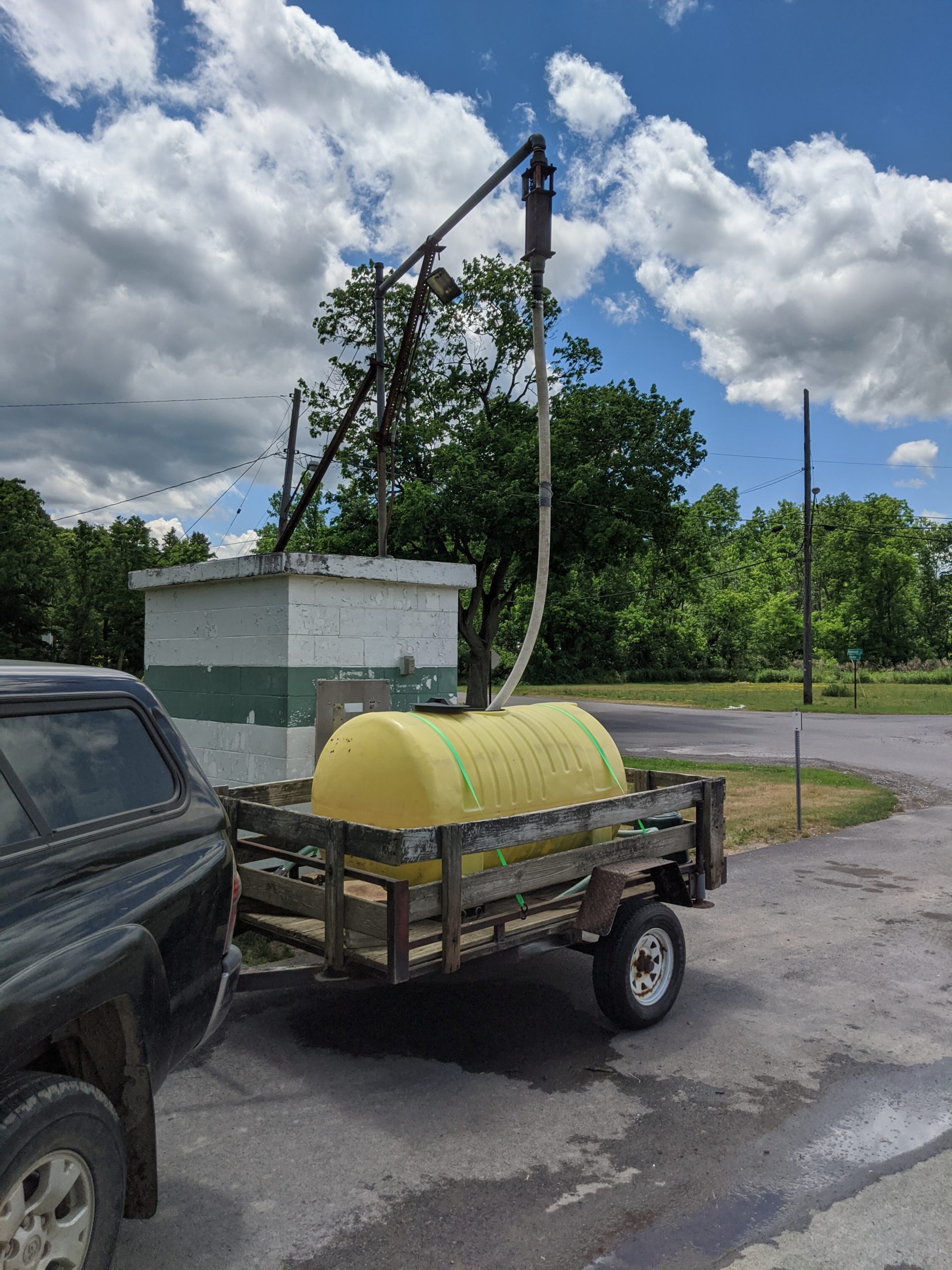 Here is what I suggest as an alternative. I recommend mounting a flat-bottom water tank or a horizontal leg tank on a trailer or truck bed, add a shutoff valve or ball valve to the tank to which (using a connector) a liquid transfer hose or an RV fresh water fill hose will be attached. The hose is used to fill the troughs. These water tanks come in many different shapes and sizes, and are not costly. They also last a very long time. The one I have, which is a 325-gallon horizontal leg tank, is about 20 years old. In today’s money, it would cost approximately $400. The trailer that it is mounted on is even older than the tank. The shut-off valve had to be replaced a couple of times when I forgot to fully empty the tank when hard frost was in the forecast. The expanding ice broke the valve. However, this is an inexpensive part to replace. The described hose is very enduring, and unlike regular garden hoses will last many years as well. It can be bought at any desired length. Farm stores will cut it to the length you want it to be. Mine is about 10 feet long.

How much water do I need for my flock? In one extreme case during the drought in the summer of 2016, I had to fill the tank once a day to water a flock of 500–some animals. Most times, a full tank lasts me, at a minimum, several days to a week. I refill it every two to three weeks during cooler seasons, or when there is a lot of water in the forage is not uncommon. If you have fewer sheep, a much smaller tank can be mounted on a truck bed or ATV and can be easily removed after watering.

With this setup, you can now water your sheep wherever you have them and whatever shape or size your grazing cell is. The need for water will not limit your imagination when setting up any grazing cell since there are no fixed access points for water. Your cost will have been significantly lower than permanent water lines would have been. You will have both more flexibility gained, and less money spent.

The troughs you want to use for sheep should not be higher than one foot if lambs are in the flock. If the troughs are higher, lambs will be unable to reach the water. That makes troughs for cattle and horses unsuitable.

In the winter, watering sheep when they are kept outdoors can become a challenge. If there is fresh, clean, and powdery snow on the ground, adult sheep that only maintain their bodies and do not raise lambs can meet their water needs entirely by eating snow. The same holds true for older lambs and yearlings, although the energy used to melt the snow inside their bodies makes them grow a little slower. Ewes that nurse lambs ought to have a freshwater source available but would likely be in the barn anyway during the winter. There are a variety of deicers on the market that keep the water from freezing when watering sheep in the middle of winter in the barn. My preference is sinking tank deicers.