Guarding means that the dog views the livestock as members of its own pack. 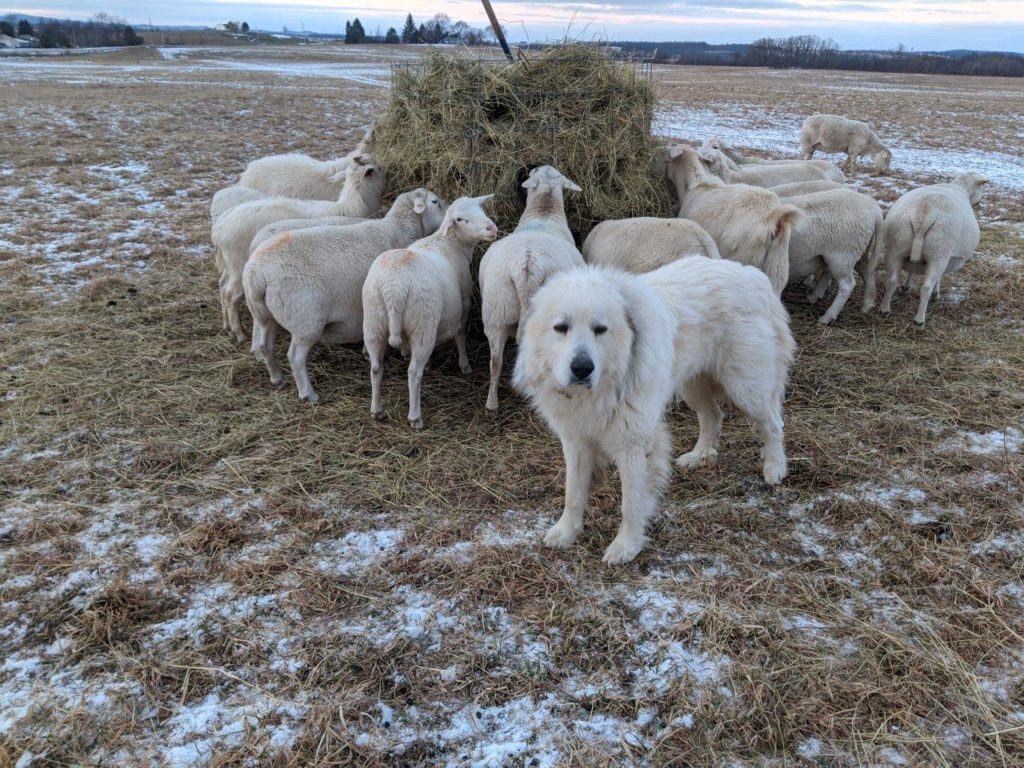 In 2011, I wrote an article for the Small Farms Quarterly about “Livestock Guardian Dogs.” In the past nine years I gained many additional insights and had new experiences, which I want to share in this new article.

A heavy loss of lambs, caused by a desperate and mangy coyote, made me consider using a livestock guardian dog. After weighing options like a lama or a donkey, I decided to go with a dog. The US government was testing several breeds of guardian dogs at that time. A lead person for these field trials was Dr. Jeffrey Green at the Sheep Experiment Station in Dubois, Idaho. He was kind enough to take my call and after a lengthy conversation, I was set on getting a Great Pyrenees. That was the breed that had not bitten any human during these tests of about 300 dogs of various breeds. I was living at that time in populated New Jersey and had rented public land to graze my sheep. I needed a dog that was safe around people. I received literature about raising, training, and understanding livestock guardian dogs. Simultaneously, I contacted a breeder in Tennessee and purchased a 13-month-old female, who had been started on goats.

There are many old-world guardian dog breeds like Great Pyrenees from France, Maremmas from Italy, and Akbash and Anatolian Shepherds from Turkey, to name a few. They have several traits in common. First, they are all large. Most often, they are of light color. Livestock, with its innate fear of the wolf, feel less threatened by a lighter colored dog versus a dark or black dog. That means white dogs are more acceptable to a group of sheep to live amongst them. Furthermore, guardian dog breeds lack prey drive, which makes them less likely to chase and hunt animals. That keeps a guardian dog from chasing the animals it is supposed to protect, or at the very least reduces the amount greatly. Guardian dogs are by nature protective. They feel obligated to protect and defend the livestock with which they grew up. This guarding behavior is instinctive. It is not taught, and it cannot be taught. The dog either has it or it doesn’t have it, in which case it will fail.

The fact that the guardian behavior is instinctive does not mean the farmer has no role to play. It is not that you let a guard dog loose with the flock and that’s that. Rearing a pup properly is important. Good behavior, liker alert barking, can be encouraged, and bad behavior, like chewing on or chasing livestock, must be disciplined. For a guardian dog to work successfully, it must be reared with the flock as opposed to growing up amongst humans. A pen with a group of older sheep that are calm, or the lambing barn, are good places to start a pup at an age of about eight weeks.

A common misunderstanding is that a herding dog could also guard. Likewise, another misconception is that a guard dog will herd the sheep. Herding and guarding are mutually exclusive. Herding derives from hunting. Herding is basically a controlled hunt. A herding dog sees the livestock as prey. Guarding, on the other hand, means that the dog views the livestock as members of its own pack (hence the need to raise the dog with the livestock) just like a pet dog views a human a member of its pack. 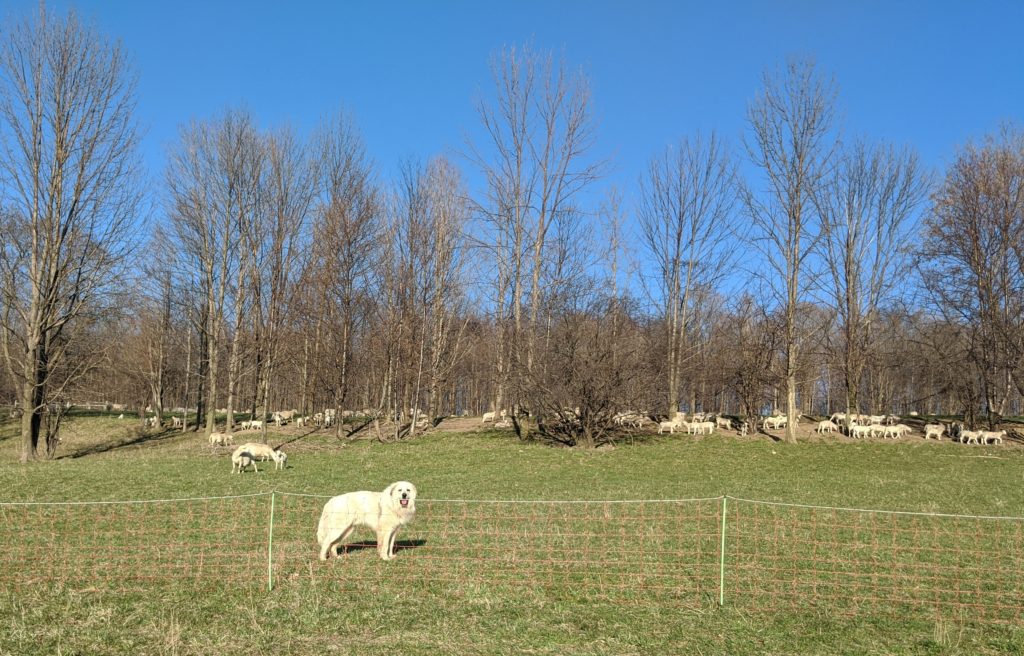 Simon has outgrown his puppy-like behavior and can now be trusted full time with the small lambs.
Courtesy of Ulf Kintzel / White Clover Sheep Farm

In this article I cannot address all you need to know about how to raise the pup, how to correct undesired behavior, how to interpret certain behaviors and so on. That would be an entire book. So, here is an actual book I own: “Livestock Protection Dogs: Selection, Care, and Training” by David E. Sims and Orysia Dawydiak. I highly recommend reading this book if you attempt raising and using a guard dog.

When I started using a guard dog, I had no knowledge whatsoever. Even though I had trained and used herding dogs for more than a decade, raising a guard dog was completely different. I had to learn as I went along and with it came many mistakes and misconceptions. Applying my newfound knowledge, I made changes over the years. The most notable change of them is the leash training. In the original literature I received from Dr. Green, it clearly stated that human interaction must be reduced to a minimum. The reason for it is that the dogs would leave the flock to interact with humans when they have too much contact with them. My first two guard dogs, Gertrude and Berthold, indeed lacked that human interaction. I could entice them with food to jump into my truck or a trailer that I converted into a doghouse. However, I could not touch them in the open field and I could not walk them on leash. My third guardian dog, an Akbash named Ista, was a bit more socialized and could be touched and patted but still was not leash trained. Now I have my fourth guard dog, a Great Pyrenees named Simon. He is leash trained and interacted extensively with my family when he was young and was walked on leash by my kids. I changed my mind on leash training for two reasons. First, it became a hassle to get a hold of the dog when the dog needed to be vaccinated, dewormed, or examined for any reason. Secondly, I have seen guardian dogs in the past decades with proper instincts that had human contact during rearing, were patted and were leash trained, but as adults had little desire to follow the person much around, let alone leave the flock. My Simon is now two years old and is not inclined to leave the sheep when he sees me. He comes and greets me (or any of my kids and my wife) when being fed or when I walk through the flock, expecting his pat and praise. However, he makes no attempt to follow any of us when leaving and is perfectly content to stay with the flock. Still, we don’t interact with him the same way I interact with my herding dogs. So in a sense, the human contact is still limited but not nearly as limited as it used to be. 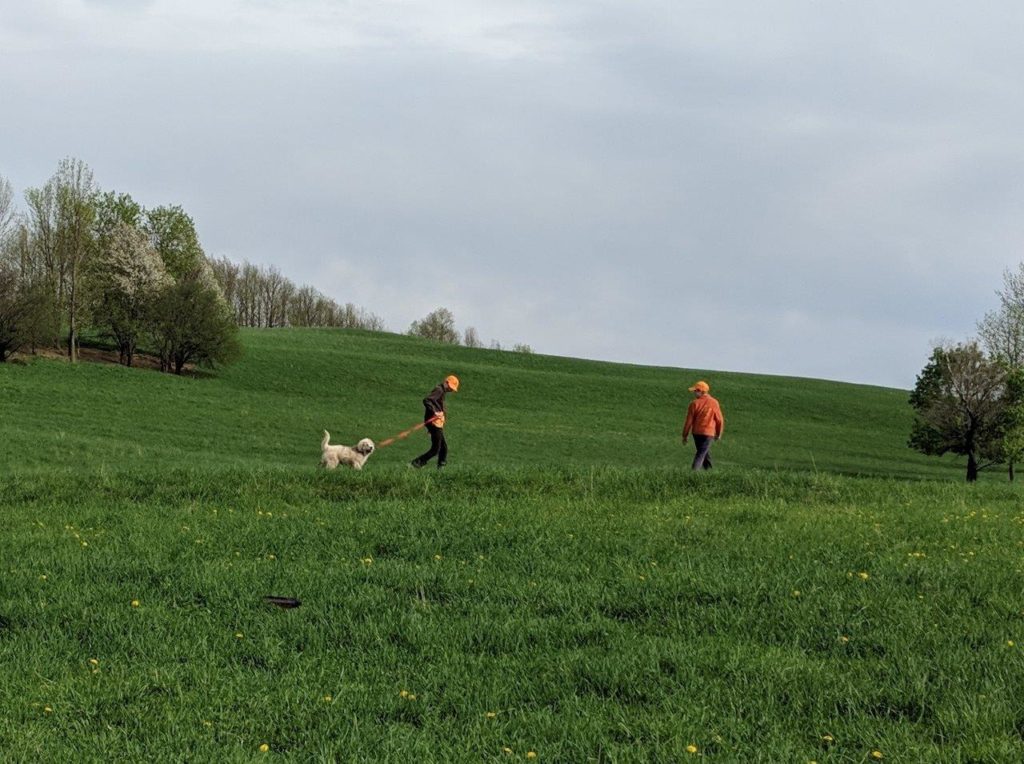 The first of two major changes I made in raising my guard dog was allowing for more human interaction with the dog.
Courtesy of Ulf Kintzel / White Clover Sheep Farm

I have been told on several occasions that guard dogs work in pairs, that I should have two. I always had just one guard dog at a time. However, I can see the benefits of having two. They can play with each other when they feel like playing. With just one, the playfulness of a pup or young dog comes to the detriment of the sheep and the dog needs to be observed much more. Such behavior, like chewing or chasing, must be corrected. Also, the way guard dogs operate when defending in a pack is different. So, I clearly see the point of having two guard dogs and don’t dispute the benefits. I just have thus far been satisfied with just one dog. It is because I don’t entirely rely on my guardian dog alone. In addition to my guard dog, I also have excellent high-tensile woven wire perimeter fence and my interior fences are electric netting that are always put up well, never in disrepair, and always powerfully charged. Furthermore, I rotate my sheep most of the year once daily. That does not allow coyotes, which like to scout out what they wish to hunt before they do, to detect a pattern or weak spots in the fence because it is different just the next day. I also don’t let dead sheep and the likes lay around that would potentially attract coyotes. Therefore, the coyote pressure on my flock just hasn’t been heavy enough to entertain the thought of a second guardian dog.

Where should you get a guard dog and what breed should you pick? You are well advised to seek a dog from working parents, meaning a pup from parents that both guard livestock. There are puppy millers who produce a great number of guard dogs without doing a selection process for suitability. That is always the case whenever a person breeds dogs in great numbers. What the parents guard, be it poultry, sheep or goats is rather irrelevant as long as they guard some sort of livestock. That is, in my view, the most important part when selecting a guard dog — far more important than the decision what breed to choose. However, as a matter of personal preference, the greater handler sensitivity of Great Pyrenees compared to Akbash made me go back to this breed. Also, Great Pyrenees as well as Maremmas are staying much closer to the flock while Akbash and Anatolian Shepherds are more territorial and will explore and roam your property more. So, keep that in mind when choosing a breed. Some breeds might be more suitable to you or your situation than others. 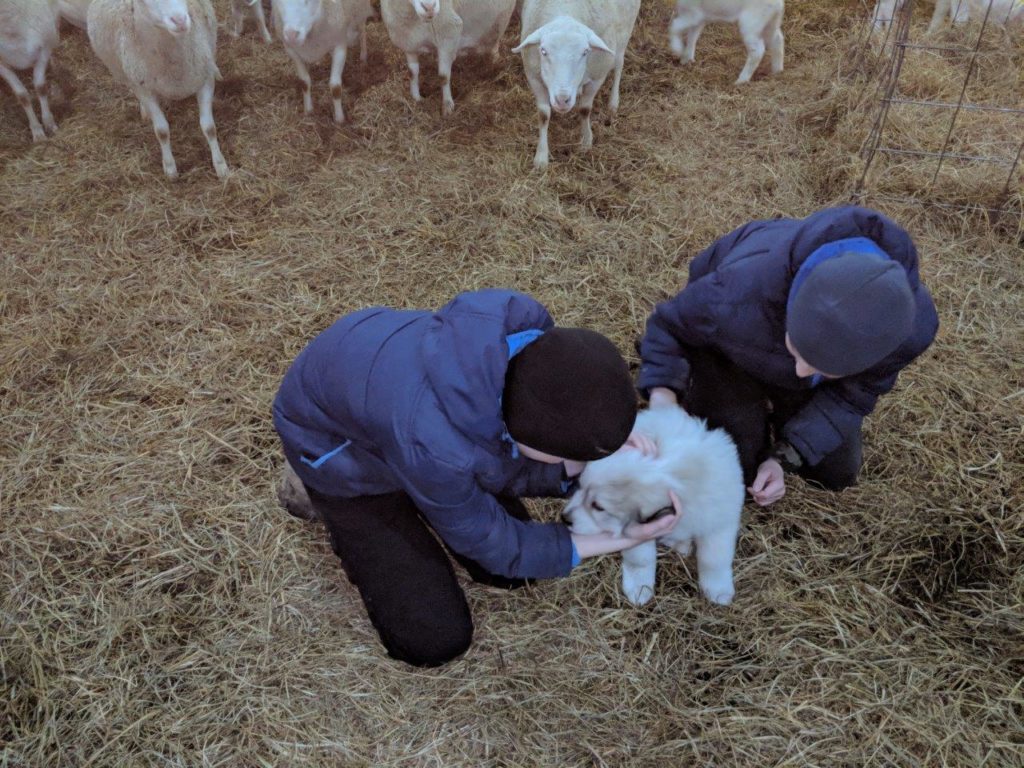 The second major change I made in raising my guard dog was getting the dog leash trained.
Courtesy of Ulf Kintzel / White Clover Sheep Farm

Having a guard dog does not mean that your dog is often involved in fights with coyotes. The dog is more a deterrent, he might get rarely into an actual fight. While exceptions apply, coyotes are opportunists. They don’t hunt in organized packs like wolves do. A dog that marked the pasture and is active at night, barking at any possible intruder is already doing more than 90 percent of the job. Most coyotes will not bother entering a pasture that has a barking guard dog, or two, in a defensive posture. It isn’t worth it. Barking is indeed a big part of the deterrence. So, if a barking dog annoys you, don’t get a guardian dog!

Furthermore, the danger of pet dogs — that are not properly observed or leashed by their irresponsible owners — getting into your flock can be even greater than a coyote attack. In addition, even if you have a guard dog in the flock, I still recommend erecting fences properly and in the case of electric fencing, electrifying them well. You will double your chances that coyotes will leave your sheep alone.

Almost any time of year I hear plenty coyotes all around me. I have seen some during broad day light, rather unafraid. Well-meaning hunters and trappers have offered to kill coyotes that are around me. I declined. Why did I do this? There is a school of thought that’s says to leave coyotes alone if they don’t prey on your sheep. If they are killed, other coyotes will occupy that territory over time. Those coyotes may have already developed a taste for sheep elsewhere. I have not had losses due to coyote kills since my arrival here in upstate New York. I will leave the coyotes alone for as long as they leave me alone.