Broccoli is in the eye of the beholder.

A head of broccoli that might appeal to one person – perhaps because of its deep green color – may leave another cold, due to an asymmetrical shape or too-large buds. 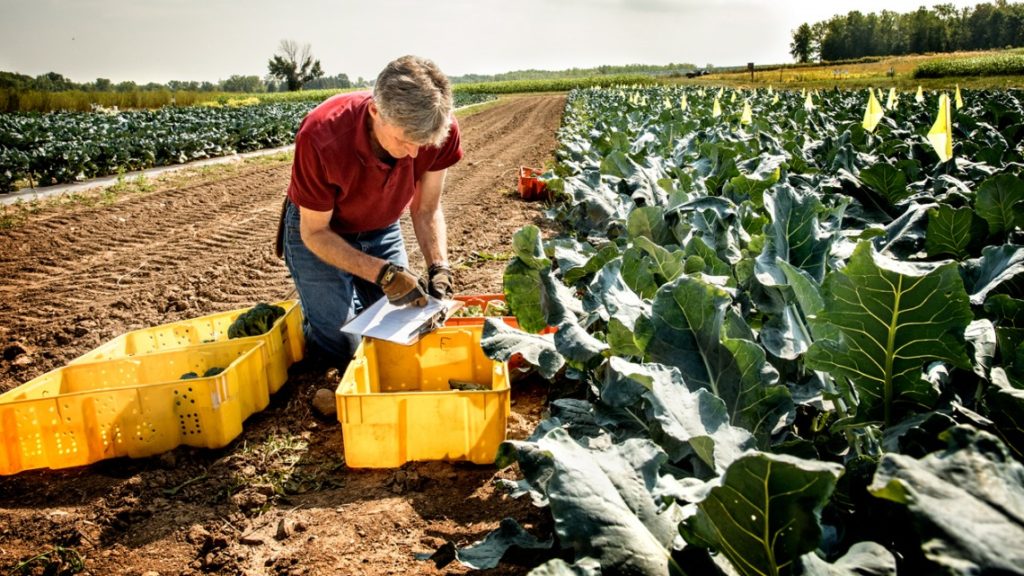 Cornell researchers participating in the Eastern Broccoli Project, which aims to produce broccoli varieties suited to grow on the East Coast, have devised a statistical method to standardize evaluations of broccoli, in order to make plant breeding decisions more consistent and efficient.

Now a Cornell group – doctoral student Zachary Stansell; Thomas Björkman, professor of horticulture at Cornell AgriTech; and Deniz Akdemir of the Cornell Statistical Consulting Unit – has released RateRvaR, a new software based on this method. RateRvaR is freely available, open source, easy to use and applicable to breeders of any vegetable, tree or flower with subjective features.

Using the software, breeders can select traits and ask multiple people to perform the same evaluation. The program will then analyze that data to determine which traits are more or less important in predicting overall quality, partly by prioritizing traits that are easier to judge objectively, such as size or color.

“The challenge for breeders, when they’re looking for wider adaptations, is that for certain crops, you plant all over the place and fly to various locations around the world to do the evaluations yourself,” Björkman said.

“But what if you had to check the plant twice a week for a month because it’s maturing at different rates? You can’t be jetting around the world; it just becomes impractical,” he said. “Breeders want to know not only how another person would score a plant, but how they would score it themselves, or how some idealized consumer would score it. This should open up the opportunity for breeders to do evaluations in multiple locations.”

The software can also identify traits that don’t seem relevant to the overall quality, so breeders can collect less data and still get accurate results.

“This approach can standardize evaluations and make them faster and more efficient, and it can also reveal individual biases in how a human might respond to a particular variety of a vegetable or plant,” Stansell said. “In the case of broccoli, we wanted to take the human subjectivity out of these evaluations, and this method allows us to see those biases and correct for them.”

Researchers in the Eastern Broccoli Project grow at least 40 varieties of broccoli a year, aiming to find varieties that will thrive in particular climates, from Florida in the winter to Maine in the summer. Their goal is not only to breed plants well-suited to local climates, but to produce high-quality broccoli consumers will buy.

But Stansell noticed he and his colleagues often had very different criteria for judging broccoli plants. He tended to choose heads that were very symmetrical, while another researcher was more interested in the head’s color.

Not only were their preferences inconsistent, it wasn’t even clear if they were truly significant in predicting the overall quality of the plant – a stubbornly subjective characterization.

“We were trying to get a firm hold on what is good-quality broccoli – you know it when you see it but it’s hard to define accurately,” Stansell said. “There are a lot of moving parts genetically that have to come together.”

With colleagues, he then created a scoring system and collected years’ worth of data on the traits they considered significant. They used this data to develop RateRvaR, which is based on relative importance analysis, a statistical technique that calculates the importance of different qualities in relation to each other.

“It showed us which traits we had an opportunity to make a lot of progress with, and which traits didn’t really matter,” Stansell said. “It also allowed us to develop priorities. For example, the shape of the head is really important, whereas maybe the size of the buds is less important, so we should focus on head shape and use our scarce time and resources to try to improve this particular aspect.”

The project was funded by the U.S. Department of Agriculture’s National Institute for Food and Agriculture Specialty Crop Research Initiative.

Melanie Lefkowitz is a Staff Writer for the Cornell Chronicle. She can be reached at mll9@cornell.edu.
Posted in Small Farms Quarterly, Vegetables
Scroll To Top