Apples will be bigger and better this harvest season, according to Cornell University experts.

Largely in part to the weather working in favor for farmers this year, apple color, quality, and size should all be superlative this fall. 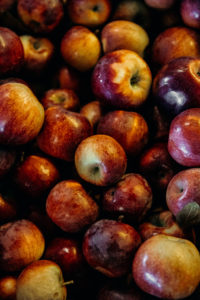 “2019 should be an excellent year for apple quality,” Cornell University professor Susan Brown, an apple breeder in the College of Agriculture and Life Sciences, told Cornell News. “These recent cold nights are perfect for enhancing both color and quality. Due to all of the early rainfall, apple size should be bigger this year.”

Brown recommends checking local growers’ websites to check availability, as some varieties are ripening a week or two later than usual.

The wet season early in the growing season could have easily led to diseases like apple scab — a fungal disease which manifests as “scabby lesions on the fruit and leaves.” But, luckily, diseases were prevented by “strategic fungicide use resulting from agile growers who responded to the risks in advance,” according to Kerik Cox, an associate professor of plant pathology and plant-microbe biology.

Apple scab affects the fruit, but only cosmetically. Cox said growers could greatly reduce fungicide use “if consumers can accept an occasional spot or two.”

In addition to low prevalence of disease, insects did not pose a larger-than-average threat to apple farms. Like some varieties ripening late, the apple maggot adult population did not appear in early August as expected, according to Arthur Agnello, professor of entomology .

If you wish to support growers in your region as you shop for apples this Fall, be sure to check the sticker on the apple. Brown says, “…there has never been a better time to experiment with finding family favorites,” and to support your local producers.

Read more of these experts’ apple projections on Cornell News.

Kelsie is from southwest Missouri and grew up on a 150-acre farm helping her family buy and sell horses and cattle. She credits FFA for finding her passion for agriculture and food issues and desiring a career as an “agvocate.” Since coming to Cornell, she has gained interest in local production, global food issues, and environmental impacts of and on agriculture. She joined the Cornell Small Farms Program in May of 2018 and is excited to gain experience to complement coursework in the Agricultural Sciences major and Communication major.
Posted in Fruits, News and Updates