A Q&A with the owners of Halal Pastures farm, an organic halal family farm in nearby Rock Tavern, NY.

Halal meat is considered cleaner vs. conventionally slaughtered meats because the blood is completely drained from the animal prior to processing. Courtesy of Halal Pastures.

People are hungry, for good, responsibly raised food.
I was hungry, for a connection to land that fed my spirit and my body. So, two years ago, I made my home in Chester, NY, a small town steeped in agricultural heritage, sitting in the black dirt region of Orange County.
I knew about the vibrant farming community when I moved there, but had no idea I’d stumble upon a farm, and farm family, that so beautifully brought together ethical and spiritual food production.
I had a chance to spend some time with Diane Aboushi, who with her husband, Samer Saleh, own Halal Pastures farm, an organic halal family farm in nearby Rock Tavern, NY.

AV: You’ve just wrapped your seventh season at Halal Pastures. How did it all start? Why organic halal?
DA: Growing up, I thought that halal just meant “not pork” (laughs). It wasn’t until college that I really started looking into what is truly halal (“lawful” or “pemitted” in Islam). At around the same time, I read Fast Food Nation, and I could never really look at industrially raised meat the same way again. I became very focused on how an animal lives and humane treatment. It wasn’t until I met Samir that I learned more about halal slaughter (zabihah), which he was very knowledgeable about. So, after we got married, we created Halal Pastures because we wanted to know that the meat we were feeding our family was responsibly raised and slaughtered according to Islamic principles. It’s not enough that the animal has a good, happy life, but it has to have to have a clean, respectful death as well. So quite literally, our business was born from a marriage of hearts and minds.

AV: The overall US halal market is expected to grow almost 20% between 2016 and 2021. From your experience, what do you see as the market potential for organic halal meat in the US?

When raised in the halal way, the animal is allowed its rights at every step: to grow naturally and become a healthy adult, to bear offspring, eat wholesome, healthy food, have space to roam, and have a dignified death. And by dignified, I mean it is petted and stroked before slaughter, the knife is extremely sharp (such that a single cut severs the two jugular veins, windpipe, and esophagus), the animals do not see one another being slaughtered, and a prayer is said in recognition of the sacrifice the animal is making (Bismillah Allah hu Akbar, In the Name of God; God is the Greatest.)
While 90–95% of our customers are Muslim, we do have non-Muslim customers. The consensus seems to be that halal meat is cleaner, because the blood gets drained from the animal before processing. People seem to look for that. 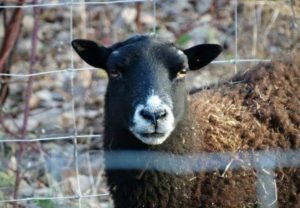 AV: What do the organic and halal labels mean to you? What do you think they mean to customers?
DA: People are big on labels. They see the term “organic” and think they are getting the best of the best. And organic halal is really the crème de la crème. But you still need to think about what makes it organic, what makes it halal, what makes it zabihah. Personally, I don’t think the labels go far enough—I don’t actually have a word or a label that fully encompasses all the care we take in raising our animals and the measures we take to ensure they have a humane death. The label feels like an oversimplification, a substitute for actually talking to us. And it doesn’t tell the complete story of the food.

AV: Do you have to be certified halal to say your meat is halal?
DA: No. But in order to have the halal label on your package, the meat must be slaughtered in a USDA-inspected facility that has also received halal certification by one of the halal certification organizations. We believe in maximum transparency and following the many regulations…it might even be a bit of overkill, but probably because I’m an attorney. A lot of our business is via mail order, so the organic and halal labels serve the role of an intermediary, for those customers that can’t come and talk to us.

AV: Does the person who slaughters the animal have to be Muslim? What would you say to someone who wasn’t Muslim (but believes in the principles of halal), and wanted to provide halal meat to their customers?
DA: It depends on the Islamic scholar you speak to, but the person who is doing the slaughter has to believe in one God. So, the personal belief and the intention of the person performing the slaughter is very important. The person who does our slaughtering here at Halal Pastures has a deep understanding of our religion. I believe there is a spiritual element that gets transferred between the person and the animal—it all counts.
Editor’s Note: All of Halal Pastures’ meat is hand-slaughtered by trained, Muslim slaughter professionals.

What Diane and Samir have created in Halal Pastures is my farming ideal—where faith, family, and farming function co-depedently. As a practicing Muslim and aspiring farmer, I have spent a lot of time thinking about the connection between my faith and farming, both of which I see as ways of life.

The arabic word “Falaha,” as I’ve discovered, was my missing link. “Falaha” means to cleave, split; to plough, till, cultivate the land. Quite poetically, it also means to thrive, prosper, be successful, lucky, or happy.
Moreover, the word is sung out from the minarets of every mosque throughout the Muslim world five times each day during the call to prayer—Hayya ‘ala ’l-falāḥ (Come to success, come to salvation).
Husbandry, well-being, and worship are inextricably linked.

Aysha Venjara is the founder of the Falaha Center for Spiritual Agriculture whose mission is to grow faith, family, and fun through farming. You can learn more about Halal Pastures at halalpastures.com.