Nuts for Nuts: Seeding a Nut Industry in the Northeast

In the Spring of 2017, 35 people gathered at Back the Lane Farm in Stephentown, New York, for a workshop with Mark Shepard, author of Restoration Agriculture, to witness the design and implementation of a permaculture inspired chestnut and hazelnut orchard. As the founder of New Forest Farm in Viola, Wisconsin — a commercial scale, perennial agricultural ecosystem that mimics the native ecology of its bioregion — Shepard has served as resource and inspiration for farmers aspiring to use agroforestry, or the intentional cultivation of trees and tree crops, as a vehicle for ecological restoration and financial profitability. This story highlights the work of three diversified tree farms in the Hudson valley area, united by the bold vision that chestnuts and hazelnuts can one day be the staple food of the Northeast region and beyond.

As woody perennials that produce nuts year after year without the annual tillage required of grains and vegetables, chestnuts and hazelnuts are ecosystem services providers par excellence–reclaiming degraded landscapes while sequestering carbon in topsoil and plant biomass. Project Drawdown, an interdisciplinary collaborative that recently delineated the 100 top solutions to climate change, has called out regenerative agriculture for its potential to reverse global warming while enhancing agricultural resilience and food security in the face of intensifying climate change. Together, chestnuts and hazelnuts represent an opportunity to advance agroforestry as a carbon farming practice in the Northeast, with the added benefit that their nuts are a profitable new cash crop for the region’s agricultural economy.

Indeed, in addition to their ecological benefits, chestnuts and hazelnuts boast growing domestic and international markets in short supply. Propagate Ventures, an agroforestry investment firm based in Hudson, NY, estimates that it would only take 5,000 acres of chestnuts to displace the $12.4 million imported into the country in 2011, with opportunities to further capitalize on unique options for value-added processing. Chestnuts, for example, can be processed into a delicious gluten-free flour, while hazelnuts produce a superior culinary oil and, of course, are a main ingredient in Ferrero’s popular Nutella spread. The pair are nutritionally similar to corn and soy, respectively, and could conceivably replace their annual counterparts with enough support and investment: “We’re going to replicate the corn/soybean model because we know it works at scale, and so we want to have some sort of analog for both,” shares Ben Hart, who hosted Shepard’s workshop last spring. 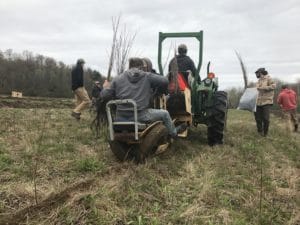 Ben Hart planted several thousand trees on his family farm over the course of a single weekend with the help of light machinery and some enthusiastic workshop participants. Spring 2017. Photo courtesy of capitalinstitute.org

As a part of a long-term vision to seed a new industry for nuts in the Hudson Valley, Hart planted several thousand seedlings on his farm in a single weekend with support from Shepard’s team and workshop participants. Initially sourcing commercially yielding varieties from Shepard’s nursery, Hart plans to work together with neighboring Shaker Creek Farm to breed locally adapted nursery stock for larger orchard development in the area over the next decade.

Good genetics are the foundation of successful nut growing operations, and decades of work from independent growers in the Midwest and Finger Lakes, NY, regions have produced hybridized varieties of both chestnuts and hazels that address issues like chestnut and eastern filbert blight, while offering cold-hardiness and commercial farm productivity. Active breeding efforts by farmers and researchers themselves are ongoing, with nurseries like Shepard’s quickly selling out each season as demand for nut trees increases throughout the country.

“Our goal is to begin developing chestnuts, hazelnuts, and other perennial plant species for commercial use,” shares Keegan Schelling of Shaker Creek Farm, “so that there is enough supply for area farmers as the industry grows.” With a diversified orchard planted last spring that includes plans for zero-input, organic apples for cider production, Keegan and his partner Alison are also researching effective perennial polycultures — intentional plantings of diverse species in mutually beneficial relationship — that can be profitably replicated throughout Columbia County and elsewhere in the Hudson valley.

Hopeful nut growers like the Schelling and Hart families are enthusiastic about opportunities to collaborate and support other growers in the region. Right across the border in Western Massachusetts, Seva Tower and Kalyan Uprichard of Nutwood Farm similarly embrace other growers as important harbingers of success for a larger movement around chestnuts and hazelnuts. “Maybe there’s something to this if multiple businesses jumped into production feet first. We’re really trying to inspire an industry here, so having co-conspirators in the start up is a welcome relief,” says Seva.
​Primarily focused on hazelnuts, the couple began converting their seven-acre woodlot into a diverse, community-scale food forest two years ago and is already seeing the first signs of nuts on some of the top-performing shrubs. Like their neighbors in New York, Seva and Kalyan are keen on resource sharing, with the goal of learning from existing growers in the Midwest and, eventually, plugging into larger efforts for regional nut-producer cooperation.
​
​Pathways to Scale
Cooperative development between growers and food system stakeholders will play a key role in supporting the longer-term success of a nut industry in the region. “In the Midwest almost across the board there are mid-scale businesses that producers are selling into, and those businesses are doing all of the packaging, processing, and distribution,” shares Connor Stedman of Appleseed Permaculture, a farm planning and regenerative design firm based in the Hudson Valley and New England area. Both Stedman and his colleague Russell Wallack research nut-based agroforestry systems as a part of their role with Appleseed, referencing the Route 9 Cooperative in Ohio as a successful example of coordinated sales and distribution for nuts. Processing upwards of 100,000 pounds of chestnuts annually, the Route 9 Cooperative provides efficiencies of scale for five different orchards that might otherwise compete with one another to access consumer markets. 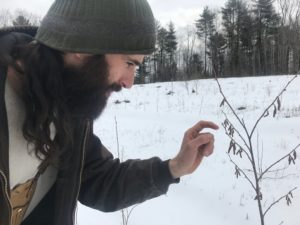 Kalyan Uprichard inspects a top-performing hazelnut at Nutwood Farm in Cummington, Massachusetts. The best plants will be selected for propagation as a strategy to develop commercially yielding genetics that are locally adapted to the region. Winter 2018. Photo courtesy of capitalinstitute.org

Both Stedman and Wallack are enthusiastic about the potential of nuts while offering guiding caution to new growers: “Recognizing that we’re at such an early stage with this crop in the US context, we need to be scientific about it if we want to develop an industry around chestnuts in the region,” shares Wallack, who emphasizes that research and collaboration on breeding for commercial production up front will directly benefit the ultimate success of a nut industry in the region.

​“It sounds like a monumental task, but I’m mostly encouraged,” says Seva from Nutwood Farm. Like their Hudson Valley neighbors, Seva and Kalyan are taking the lead on their own breeding efforts while calling for additional support from values-aligned partners: “Soybeans were non-existent as a crop 100 years ago and it’s only because of massive public investment through land-grant universities and public research that spurred the soy plant into existence. So nuts really just need a revolution, a little redirected resources, and it could totally happen.”

With active breeding efforts underway, there is promising potential for tapping into larger networks of existing nut-growers throughout the region. About 200 miles west of the Hudson Valley in the Finger Lakes, for example, the nascent New York Tree Crops Alliance is taking tangible steps towards the formation of a producer cooperative. Established New York operations like Twisted Tree Farm in Spencer and Z’s Nutty Ridge in McGraw already serve as important resources to new nut growers in the surrounding region, providing commercial nursery stock and education around orchard planting and maintenance. The budding cooperative is an opportunity to further develop technical assistance for chestnut and hazel operations throughout the state while supporting the regional adoption of nuts as an ecologically regenerative industry. With projected sales in the $500M range over twenty years, the cooperative identifies the chestnut and hazelnut duo as a financially viable opportunity for restoring fallow hillsides throughout New York State to agricultural productivity.
​
Leading with polyculture, not monoculture
Moving forward, a key challenge will be to develop production models for chestnuts and hazels that not only optimize biodiversity but also achieve the economies of scale necessary for commercial viability. “All of this research is about how we design diverse chestnut orchards, or orchards that effectively integrate into a farm system,” shares Wallack.  He notes the distinction between simplified monoculture plantings of chestnuts and the more diverse, albeit labor-intensive polycultures in 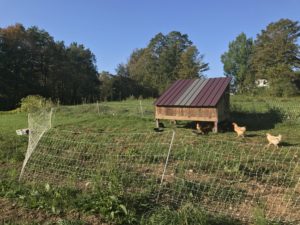 place at farms like Shepard’s in Wisconsin.
Ben Hart, whose initial planting last spring serves as a model for regional replication, points out that, “If we want this regenerative model of nut-based polyculture farming to explode, it must be profitable for farmers to operate at price points consumers are willing to accept.  In the context of an economic system that rewards productivity and scale, the long-term adoption of such diversified farms calls for business models that navigate the complexity of polyculture while attaining at least some of the operational efficiencies of commodity-scale monoculture — not an easy nut to crack.

“Information sharing is huge: we’re all in the same game together and I don’t see other people who are doing nuts as a competitor with me so much as a possible collaborator,” affirms Hart. ​He identifies opportunities for coordinated research on farm plans and financial models as key to the long-term success of a nut-industry in the Hudson valley and beyond.

Recognizing that the trees are a long-term investment, farmers aspiring to return chestnuts and hazels to the northeast food system are clearly a highly committed, entrepreneurial lot. For Nutwood Farm, the planting of nuts is a deliberate choice, rooted in a larger story about the potential of perennial agriculture to heal degraded land and regenerate communities: “We still have the diversity of the natural environment, we have the insect and the bird life that are the signature of a healthy ecosystem, or at least one that is recovering,” share Seva and Kalyan. “We can contribute to that or we can take from that. We contribute to it by bringing in more diversity, because diversity is strength.”


For more information, including audio interviews and video content, readers can visit the original version of this article published online at http://fieldguide.capitalinstitute.org/
Readers interested in agroforestry and nut production are encouraged to visit the Savannah Institute at www.savannainstitute.org for more information on the subject, including education and webinars from experienced farmers and practitioners in the Midwest US and beyond.
A version of this article was originally published on The Field Guide to a Regenerative Economy, an activating storytelling project of The Capital Institute working to illuminate the emergence of a regenerative economy. Learn more at capitalinstitute.org

Mark is based in Great Barrington, Massachusetts, where he explores the relationships between food, community, and agriculture in the new economy. You can read more of his writing and learn about his work at https://about.me/MarkjPHL
Posted in Forestry & Agroforestry, Small Farms Quarterly