Methods to improve old unproductive pastures and hayfields that are both effective and economical are a common challenge for farmers, and especially so for new and beginning farmers.  The time and cost for re-seeding includes multiple passes of tractors and tillage machinery including plowing, disk harrowing, spring tooth harrowing, rock picking, planting, and packing to establish a new planting, far more work and cost than many farmers can afford.  Also, many upland pastures are too steep and rocky to plow, and can be severely eroded if tilled at the wrong time.  An effective no-tillage/less tillage approach to reseeding these unproductive pastures and hayfields would be a great benefit to many farmers who depend on pastures or hay for their livestock. 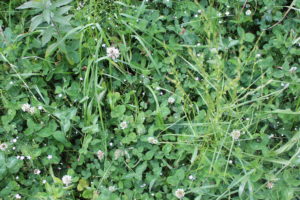 Well-managed pasture offers a diversity of species growing densely together.

Past studies done with Sustainable Agriculture Research and Education (SARE) grants have shown that it is possible to successfully no-till plant seedings of red clover and hairy vetch.  In an effort to build on these earlier no-till seeding studies, Cornell Cooperative Extension of Chenango County, in collaboration with SARE, did trials of no-till seeding of red clover, hairy vetch, white clover, perennial ryegrass, orchard grass,  birdsfoot trefoil,  and kentucky bluegrass on six farms in upstate New York.  The farms included four organic Amish farms, one conventional dairy farm with no herbicide, and one conventional farm that used glyphosate, as a control.  Four of the farms used a no-till seed drill, and two of the organic Amish farms used spin on hand seeders.
Each farm had a test site with six contiguous 1 acre plots.  All of the sites were tested for pH, and four of the farms had lime spread; two farms already had the necessary pH of 6.2. The lime spread had an Effective Neutralizing Value of 90% to bring all of the soils to 6.2.

The following seed combinations were seeded in at the seeding rates recommended by the seed supplier:

The no-till planting of all seed plots was done in May and June of 2016.  The year was very dry, with drought conditions persisting through the summer, which greatly impacted the germination of the seeds.  As might be expected given the dry conditions, the seeds that were drilled germinated much more quickly than those that were spun on the soil surface. Prior to seeding, the hand spun sites were heavily grazed by either cattle or draft horses to remove as much plant material as possible, ensuring good seed to soil contact.

The results of the plots were evaluated with seedling counts in 2016, with photographs, and with forage analysis in 2017. The main take away from the study was that in nearly all cases, each seeding treatment on each farm provided improved results compared to the control of existing plants in the field.  As might be expected, the results of the study varied by farm and by planting method, but overall forage analysis shows that each of the seed combinations provided improvement of forage quality when compared to the controls.

In the first year, the drought year, the best producing crop early, was hairy vetch drilled into the glyphosate treated field.  This produced a thick crop of hay despite the dry weather.  However, on the other farms, the hairy vetch did not do as well. The one plant that seemed to do best in most of the seedings was perennial rye grass.  It seemed to establish in most of the test sites and contribute to better forage quality.  Otherwise, the red clover and white clover plots improved forage quality the most.
In terms of management recommendations, our conclusions were that no-till seeding will provide improved forage quality on most farms.  If the pasture to be reseeded can be grazed down by animals as much as possible to remove competing vegetation before seeding this is a great advantage. A no-till seeder was more effective at establishing seeds quickly in dry conditions in the short term, but seed spread on dry ground with a spinner appears to eventually germinate and will also improve forage quality.

In regard to which types of plants that farmers might want to consider for their own plantings, each of the different legumes seemed to do well on some farms but not on others, but perennial rye grass seemed to establish well in most sites.  Consequently, a seed cocktail containing perennial rye grass, red clover, white clover, and perhaps birdsfoot trefoil would be a good approach.  One or more of the legumes would likely succeed, as would the perennial rye grass, to bring in the needed nitrogen from the atmosphere.

For farmers seeking a quick production of high quality hay, hairy vetch showed promise. A cocktail of hairy vetch, red clover, white clover and perennial rye might provide a heavy first year harvest of vetch, followed in future years with crops of the other varieties.

The most important take away from the no-till seeding trial was that hayfields and pastures can be economically rejuvenated using no-till  seedings.  A no till seeder can be prohibitively expensive, oftentimes well over $30,000, and the best method of acquiring one would be to rent or hire the services by someone who already has one, especially seeing that it is only needed for a short time period each year.  The main advantage of this type pf seeder is that the seed in actually injected into the soil, whereas with a broadcast seeder the seed is simply scattered onto the soil surface. Broadcast seeders, either hand spun or tractor mounted, are very difficult to calibrate, and you have to very meticulous in using one of these type seeders.  Once you get the system in place, they can be useful, however, to strengthen existing stands.

Rich Taber, M.S., M.S.F., is Grazing, Forestry, and Ag Economic Development Specialist with CCE Chenango.  He lives with his chainsaws on a farm that has a 100 acre woodlot in Madison County. He can be reached at phone: 607-334-5841 ext. 21 or email: rbt44@cornell.edu.
Posted in Livestock & Dairy