Bans on the apple industry’s go-to thinning chemical, carbaryl, by retailers such as Whole Foods Markets have prompted New York apple producers, CCE educators and Cornell researchers to team up to examine a mechanical blossom thinning alternative to carbaryl.

by RJ Anderson
For optimal yield and fruit quality, apple growers in the United States have long relied on chemical solutions to generate spring blossom thinning to promote the growth of larger, higher-quality fruit by giving them less competition for carbohydrate. However, in the last couple of years, one of the apple industry’s go-to thinning chemicals, carbaryl, has come under fire with retailers such as Whole Foods Markets prohibiting the chemical’s use on produce sold in stores.
Equally alarming for growers, says Cornell Cooperative Extension’s (CCE) Mario Miranda Sazo, an orchard management and mechanization specialist with CCE’s Lake Ontario Fruit Team, are the continued whispers of potential U.S. ban on carbaryl. The carbamate insecticide has been outlawed in Europe since 2008.
“Growers in the Northeast are especially dependent on carbaryl – nearly all of them chemically thin in the spring using carbaryl in combination with either naphthaleneacetic acid or benzyladenine,” said Miranda Sazo. “Because of this region’s humid climate, removing a key contributor like carbaryl from current management practices could create obstacles for growers and make them less competitive.” 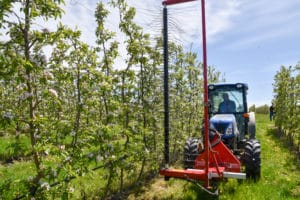 Such concerns prompted New York apple producers, CCE educators and Cornell researchers to team up for a recently-completed three-year study examining a mechanical blossom thinning alternative to carbaryl. Published in the winter 2016 issue of New York Fruit Quarterly, research led by Miranda Sazo and College of Agriculture and Life Sciences (CALS) scientists Poliana Francescatto, Terence Robinson and Jaume Lordan Sanahuja, tested mechanical string thinning on Gala and Honeycrisp apple varieties at Lamont Fruit Farm in Waterport, New York.
Mounted on the front of a tractor, the Darwin string thinner resembles a large weed whacker crossed with a feather duster. Featuring rotating flexible two-foot-long injection-molded plastic spindles, the machine whips away a third to a half of a tree’s blossoms. What remain theoretically will grow into bigger, healthier fruit.
“With this study, we wanted to identify the ideal thinning parameters while monitoring and mitigating potential spread of fire blight (a destructive and highly contagious fruit tree disease exacerbated when tree tissue is wounded),” said Miranda Sazo, who received funding for the study from the U.S. Department of Agriculture Sustainable Agriculture Research and Education program and New York Apple Research and Development. “While measuring return bloom and potential yields for each tree, we looked at supplementing mechanical thinning with other chemical treatments.
“It was probably the largest research project focused on mechanical blossom thinning undertaken in North America thus far,” Miranda Sazo added.
For the project, Lamont Fruit Farms committed approximately two-and-half acres of mature Honeycrisp and Gala trees. Rod Farrow, one of the farm’s three owners, became intrigued by the technology after seeing it five years ago while visiting orchards in Europe.
“When I returned from Europe, we started some very basic and very small trials,” Farrow said. “Then Mario approached us about conducting a larger three year project. My partners Jason Woodworth, Jose Iniguez, and I were more than happy to collaborate.” 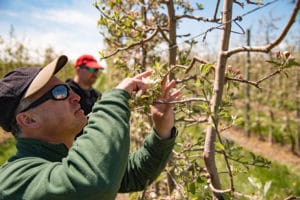 The first year of the study ended in frustration as they struggled to pinpoint optimal rotation speeds for the Darwin spindles and ground speed of the tractor. “The fruit size ended up being too small that year and we lost a considerable amount of money compared to grower standard for that acreage,” Farrow said. “The second year we lowered the revolution per minute (rpm) of the spindle and improved our yield a little, and then in the 3rd year we slowed the spindle speeds even more and found what we think is a sweet spot.”
For Lamont Fruit Farms’ narrow fruit wall, in which trees are spaced two feet apart with 11 feet between rows, the optimal spindle speeds lie within a range of 180 and 200 rpm. The ideal tractor speed is five miles per hour.
“With Mario’s help, we really dialed those metrics in, which has been huge,” said Woodworth, who operates the Darwin machine. “We also found that spraying with a benzyladenine product immediately following string thinning improved fruit quality and yield. And return bloom of the blossoms that were mechanically thinned last year has been more than acceptable.”
The encouraging data prompted Lamont Fruit Farms to use the process on additional acreage this spring. “After the study, we felt very comfortable trying it out on a more commercial scale,” Farrow said. “And at the conclusion of this growing season, we should be able to glean enough real-world yield return data to analyze mechanical thinning’s true potential for our operation.”
Still, the potential spread of fire blight, a disease that can spread quickly and significantly impact a farm’s entire harvest, has pushed Miranda Sazo to conduct more research. This past April, he partnered with CALS Associate Professor of Plant Pathology Kerik Cox on a one year trial at the New York State Agricultural Experiment Station in Geneva, New York aimed at assessing and minimizing the threat of fire blight following mechanical thinning. It is running concurrently with a similar study at Washington State University.
Going forward, Woodworth believes Miranda Sazo’s research has already helped Lamont Fruit Farms better position itself should carbaryl exit the industry. “If it goes away, we’re in a good place to react and hopefully remain profitable,” Woodworth said. “And Mario has been a big reason for that. His expertise and energy has made a big impact.”
Miranda Sazo believes potential exists mechanical thinning could become a game changing modality for apple growers in the New York and the rest of the Northeast. “We’re on an accelerated learning curve,” he said. “They’ve been testing and using these techniques for several years in Europe – what we’ve done in three is really exciting. It goes to show how much can be accomplished when you pair researchers with highly-skilled, forward-thinking growers who are willing to take a risk.”
R.J. Anderson is a writer/communications specialist with Cornell Cooperative Extension.