by R.J. Anderson
For commercial fruit and vegetable growers in New York state, winter is a time of reflection, preparation, and guarded optimism. It’s also a time to hone one’s craft through continuing education and consumption of research-based analysis. 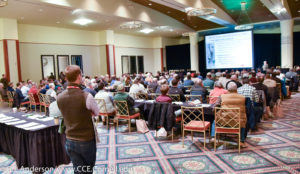 Here is a wrap up the annual Empire State Growers Expo, which was attended by many small farm owners. It includes stats and info. from Commissioner Ball’s presentation on the Governor’s new NY Grown and Certified program. Credit: R.J. Anderson/Cornell Cooperative Extension

A buffet of that insight drew more than 800 attendees to the 2017 Empire State Producers Expo, which took place January 17-19 in Syracuse, New York. Co-hosted by the New York State Vegetable Growers Association and Cornell Cooperative Extension (CCE), the event featured Cornell scientists, CCE educators, and experts from across the country presenting on topics including weeds, wildlife and pest management; food safety; best growing practices; and business development tactics.
“The Expo provides a great opportunity to network with growers, educators, and scientists from throughout New York and beyond,” said CCE Director Chris Watkins. “The single goal is that attendees drive home the feeling that they have invested their time, energy and resources well, and hopefully with thoughts of how they can make changes in their operation to improve profitability.”
Tree fruit growers found sessions especially helpful as standing-room-only crowds packed the Syracuse Oncenter’s ballroom Wednesday. Kicking off the day, retired Cornell plant pathologist David Rosenberger detailed sudden apple decline, a troubling condition killing young apple trees across the state, which has puzzled researchers.
The afternoon featured presentations from horticulturist Ines Hanrahan, a fruit safety expert with the Washington Tree Fruit Research Commission. She spoke about honeycrisp apple best management practices and reducing the spread of foodborne pathogens through proper orchard management. Joining Hanrahan was Cornell horticulturist Greg Peck, who talked about the importance of soil health in apple orchards. 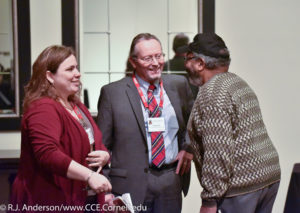 Highlighting the three-day event was a presentation by New York State Department of Agriculture and Markets Commissioner Richard Ball covering Gov. Andrew Cuomo’s recently unveiled New York Certified Grown Program. Identifying and promoting New York producers who adhere to the state’s food safety and environmental sustainability programs, the certification assures consumers that the food they are buying is local and produced at a high standard.
“Many of the attendees indicated that they left the session with a clearer definition of the program,” said CCE’s Darcy Telenko, extension vegetable specialist with the Cornell Vegetable Program. “As a vegetable farmer himself, Commissioner Ball is able to connect [with] our growers and has a great understanding of food safety and the need to promote New York agriculture through concise messaging.”
Watkins agreed: “Commissioner Ball is a wonderful advocate for New York state farmers, and his willingness to attend EXPO and update the industry firsthand is priceless. It is in keeping with his often-spoken comments about our state being one based on partnerships, relationships and friendships.”
With many of the sessions packed, attendance numbers significantly higher than in recent years, and an on-site trade show buzzing with activity, Telenko said the 2017 event was one to build on. “We had a number of very interesting and current topics and we brought in great speakers,” she said. “I think anyone who attended an educational session – myself included – learned something new that we can take and implement on the farm to improve vegetable and fruit production in New York.”
R.J. Anderson is a writer/communications specialist with Cornell Cooperative Extension.