How is the Changing Climate Affecting Your Farm?

by Jonathan Lambert
As many are certainly aware, the earth’s climate and weather are always in flux.  However, the rate of change in climate conditions and severe weather events we are seeing today is far beyond what previous generations have had to face, and is having a noticeable impact on farmers in the Northeast.  Challenges 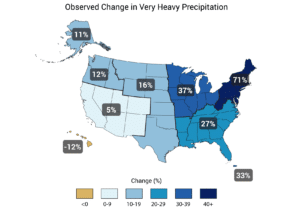 Percent increases in the amount of precipitation falling in very heavy events from
1958 to 2012 for each region of the U.S.; http://nca2014.globalchange.gov/report/our-changing-climate/heavy-downpours-increasing

such as heavy rainfall, summer heat stress, short term drought, and heightened pest and weed pressures are becoming more prevalent due to climate change, putting farmers in the region under increasing pressure.
Many farmers are already taking the initiative to increase their resilience to extreme weather and increasing energy costs, and some are beginning to capitalize on opportunities that climate change may bring.  Still, making decisions based on future scenarios is a complex endeavor, and is muddled even more by trying to discern between long-term climate shifts and possibly normal weather variability.  It is a necessary step however, as farmers will have to make changes to keep ahead of the trends predicted for the Northeast over the coming decades.  Many farmers are already experimenting with new crops and crop varieties, for example, as temperatures rise and growing seasons lengthen, and some are investing in forms of renewable energy such as solar and biogas.

What We Can Expect Now and in the Future

As a region, we are already experiencing warming and increases in the amount and severity of extreme weather.  Average temperatures across the Northeast have risen by over 2°F since 1970, and average winter temperatures are 4°F warmer.  Extreme rainfall events (>2 inches in 48 hours) have increased by 71%, and yearly rainfall averages in the region have increased by 3.3 inches in the past 100 years.  These changes are forecast to continue to be exacerbated by climate change, with yearly average temperatures from 3 to 5.5 degrees warmer by 2050, precipitation coming in more intense bursts with longer gaps in between, and the threat of up to a foot of sea level rise in coastal regions in the next 3 decades.

Climate Change has been the focus of research at Cornell for many years now, with over 50 faculty and researchers in the College of Agriculture and Life Sciences alone contributing to studies on the topic. The Cornell Institute for Climate Change and Agriculture works closely with a number of these researchers to produce information for websites, factsheets, and research/policy briefs. These materials have greatly informed this article, especially two fact sheets in particular, entitled “Farming Success in an Uncertain Climate” and “New York’s Changing Climate,” authored by Professors David Wolfe and Art DeGaetano, respectively. These fact sheets can be accessed here.

For agriculture, these changes will result in more flooding, intermittent drought, heat stress, increases in diseases, pests, and weeds, and even increased freeze risk and damage.  It is important to remember that the severity of these future projections depends on the amount of heat trapping gases emitted throughout the world, including by farms here in the Northeast.  Through mitigation actions, the agricultural industry can contribute to lessening climate change by reducing greenhouse gas emissions and sequestering carbon (for example, by incorporating plant material in soils).  Agriculture can also adapt to some of the inevitable impacts, and some farmers are already doing so, which can be seen throughout the region.  Winter cover crops are becoming more popular, the proportion of no-till/low-till fields is increasing, and more farms are turning to solar, wind, and biogas to supplement their energy needs.  Many farmers are also seizing opportunities that exist in longer and warmer growing seasons as well by planting longer season crops and even experimenting with varieties of peaches, melons, and European wine grapes that might not have grown in our area 30 years ago.

How to Get Started

In order to make these changes, however, farmers need more localized information on the impacts and challenges posed by climate change to their operations, as well as possible solutions.  If not already being used, farmers may want to consider the following recommendations in response to the new challenges coming with our changing climate, now and in the future.

Key Impacts and What Farmers Can Do

Flooding
The trend of increasing heavy rainfall events is expected to continue, and will pose challenges such as: interfering with the timing of planting and harvesting, soil loss due to erosion, root damage, reduced yield, crop loss, and nutrient runoff.  Farmers can adapt by: promoting water infiltration by increasing 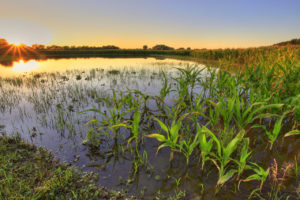 soil organic matter, reduced tillage, cover cropping, planting riparian buffers, investing in tiling or other drainage systems, and when feasible, shifting planting dates to avoid wet conditions.
Sea level rise is also a worry for farmers near the coast, with storm surges becoming more severe and reaching further inland, and freshwater wells and aquifers running the risk of saltwater contamination.  Farmers can respond by promoting water infiltration, maintaining wetland buffers, and developing emergency response plans for severe flooding that may prevent access to fields and roads.
Short-term Drought
While the Northeast does not face the severe water shortages predicted for some other regions of the United States, it still faces the risk of increasing short-term summer drought.  This is due to warmer temperatures and longer growing seasons, which will increase crop water demand while summer time precipitation remains the same or possibly declines.  Drought can cause declines and variations in yields for rain-fed crops, and can be especially damaging in high-value fruit and vegetable crops. Farmers can adapt by increasing irrigation capacity, improving irrigation efficiency, and experimenting with drought-tolerant crop varieties.
Heat Stress
The growing season across the state has already increased by an average of 8 days, however the number of summer heat stress days (exceeding 90°F) is also expected to increase substantially, with winters continuing to grow milder as well.  Warmer summer temperatures have been shown to lower yields and quality for certain grains by speeding the development cycle and shortening the period during which grain heads mature.  Additionally, other heat-sensitive crops such as potatoes, cabbage, snap beans, and 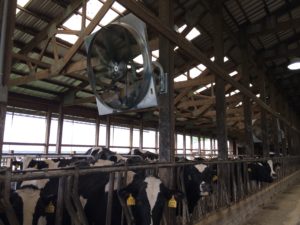 apples may become more challenging to grow.  Farmers can adapt by exploring new varieties of heat-resistant crops and diversifying crop production to reduce reliance on heat-sensitive crops.  Over the longer term, farmers can also capitalize on the opportunity that longer growing seasons present.
Heat stress is not only a challenge for plants, but can also have detrimental consequences for livestock. Keeping cool with the increased heat projected with climate change will be critical for maintaining the milk production levels that have made dairy the dominant industry in the Northeast’s agricultural sector.  Challenges include dangerous and unhealthy conditions that reduce productivity and reproductive capacity, and fluctuations in the availability and cost of feed such as corn grain and silage.  In 2005, an unusually warm year, milk production waned by 5 to 15 pounds per cow, per day at many dairies, leading to losses of 8 to 20% of production.  Dairy producers can adapt by preventing over-crowding and improving barn ventilation, minimizing heat exposure by feeding during cool parts of the day, increasing water availability, and adjusting cows’ diets. Other, more long-term solutions to alleviate heat stress include: improving cooling capacity through additional fans, sprinklers, and misters, insulating under barn roofs, or building new barns with improved cooling capacity for future heat conditions.
Diseases, Pests, and Weeds
Interactions between climate, crops, insects, and diseases are complex. However, evidence suggests that climate change will increase disease, pest, and weed pressure, as more pests and weeds survive mild winters and warmer summers allow for new species to invade and native ones to grow faster. This environment will require improved rapid response plans and monitoring efforts that allow for targeted control of weeds, diseases, and pests.  Wide adoption of integrated pest management (IPM) will also help farmers manage new pests with minimal economic, environmental, and health risks.
Freeze Risk
In the past few years, late season freeze events have struck orchards and vineyards after plants had already bloomed, causing serious crop losses. Farmers can implement several strategies to guard against these freezes, including: using heaters and wind machines to circulate warmer air in vineyards or orchards, irrigating before or during potential freezes, and paying close attention to detailed weather forecasts.
To help farmers increase their resiliency, reduce risks, and 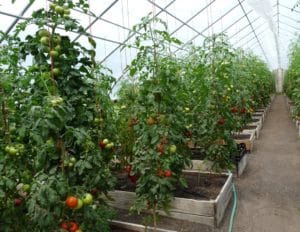 reduce costs on their farms, the Cornell Climate Smart Farming (CSF) program was launched in 2015.  The CSF Program is developing several new decision tools that allow farmers to examine future climate scenarios for their farm, and how to make more informed decisions based on climate models and best management practices. The next article in this two-part series on climate smart farming will be available in the fall, and will focus on these decision tools, the support that the Cornell Climate Smart Farming program and extension team can provide, and how farmers can start making changes now to get ahead of the curve. In the meantime, check out the resources, videos, and tools at our website, and explore the USDA Northeast Climate Hub’s website for other science-based information as well.
Jonathan Lambert is a staff member with the Climate Smart Farming Program at the Cornell Institute for Climate Change and Agriculture in Ithaca, NY.
For more information on the Climate Smart Farming Program and the Cornell Institute for Climate Change and Agriculture, navigate to our websites at climatesmartfarming.org and climateinstitute.cals.cornell.edu.  Contact us via email at cicca2014@gmail.com