The use of pigs in silvopasture deserves some words of caution; rooting is not the same as masting.

by Joseph Orefice
The practice of silvopasture has gained interest in recent years in the Northeastern United States.  This practice, which integrates the sustainable production of livestock, forage, and trees on the same unit of land, has the potential to increase farm productivity and soil quality when compared to conventional pasture systems. While silvopasture can function with many species of livestock, the use of pigs in wooded pastures deserves special attention. 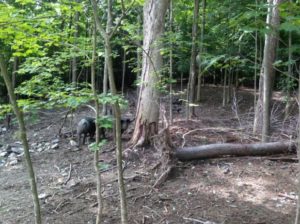 Pigs being pastured in woodlands on a Northeastern U.S. farm.  The farmer was calling this silvopasture, but it is much more appropriately classified as a pastured woodland due to month long livestock rotations, no management of trees, and the complete lack of a forage layer. Soil degradation is very evident in this photograph as is severe damage to tree roots.

In 2014 and 2015 I lead an investigation into silvopasture practices on farms in New York and New England. This research was conducted through the University of New Hampshire and funded through the Northeastern States Research Cooperative.  A major conclusion of this work was that many misconceptions existed regarding what silvopasture is. Of these misconceptions, the most concerning was pigs being kept in wooded areas to the detriment of trees and forage and the practice being mislabeled as silvopasture.  Specifically, pigs were either intentionally or unintentionally being allowed to root in forested pastures. No tree care was taking place in these paddocks, and no tree care means it’s not silvopasture.
As a farmer, keeping pigs in forested areas does has its appeal. Pigs need shade during the summer and the diversity of insects, roots, nuts, and plants in wooded areas can be very appealing.  Pigs also require supplemental feed when pastured, a possible source of nutrients for the forest. However, the challenge is that when pigs are allowed to root they significantly damage soil structure leading to:

Pigs have been incorporated into treed pastures in Europe for centuries. However, the use of pigs in these systems has been to glean fallen hard or soft mast.  Pannage is a historic English term for keeping livestock in woodlands to consume mast; this practice was also known as acorning. In fact, the term “mast” is derived from the old English term 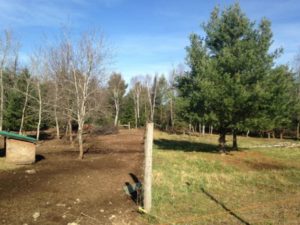 This image, from a Northeastern U.S. farm, depicts the differences between continuous pasturing of pigs (left) and short rotational grazing of cattle (right).  While neither system can be defined as a silvopasture due to lack of tree management, lessons regarding pasture management are evident in the forage layer or lack thereof.

“maest” which referred to food for swine. Mast on the forest floor is much more appealing to a pig than the roots of trees, thus soil destruction can be significantly reduced if pigs are only allowed into wooded pastures for short periods and only when there is ample mast available.  The European practice of pannage is much different than the rooting of forests which is occurring on Northeastern US farms.
Perhaps it is their strong and long-lived stature that leads farmers to misinterpret trees as resilient to root damage. In reality, it is forages that are resistant to root damage because they are able to rapidly respond to disturbances through regeneration. When trees experience root damage their strategy is to live off stored energy reserves. It often takes years before these reserves run out and the tree starts showing signs of decline or mortality. Therefore, it is critical to maintain the integrity of tree roots and soil in silvopastures because a few weeks of soil disturbance can end decades of tree growth. Even more concerning is that it can take 5-10 years before this decline in tree health is evident.
Timing is a major factor in sustainably managing pastures, especially silvopastures. Much work has been conducted to determine optimal rotation lengths for grazing animals such as sheep and cattle.  Farmers have embraced the results of this work and many in our region are utilizing short rotations (less than 3 days) followed by long (at least 3 weeks) periods of rest for their grazing animals. It is logical that for our rooting animals, pigs, rotations must be even shorter than those of grazers (think 1 day or less for pigs in silvopastures). Unfortunately, little work has been done 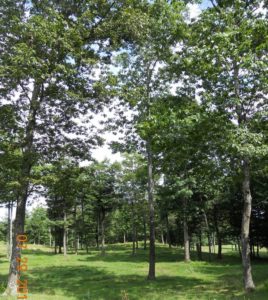 This image, from a Northeastern U.S. farm, depicts a silvopasture dominated by red oak.  Notice the forage layer, sunlight reaching the forest floor, and lack of exposed tree roots. Livestock, cattle in this case, are rotated through for up to one week and not re-introduced for over one month.

in relation to pastured pigs. A simple recommendation is for farmers to set up multiple paddocks prior to introducing pigs into pastures, wooded or not.  This will ensure that the system can function and also save the farmer time moving pigs between paddocks later in the season. Development and maintenance of a sod layer in silvopastures will also help to buffer soil degradation and rooting from pigs. The development of a sod layer will usually require thinning of trees, allowing sunlight to reach the forest floor.
There is a desire among farmers to be doing the right thing for the land, but often they do not know what the right thing is. Poorly managed woodland pastures are a historic norm in our region, making up nearly 20% of total pastured acres (USDA National Agricultural Statistics Service). A possible solution for increasing the sustainability of woodland pastures is to convert them to silvopastures. However, silvopasturing is very new to our region and best management practice are sparse. The confusion of woodland pasture and silvopasture exacerbates the problem because political support and credibility for silvopasture is often held back because of poorly managed wooded pastures.  Farmers must be the leaders in advancing the sustainability of wooded pastures. A first step is to consider this sound advice from two farmers in Rhode Island: “Pay attention . . . observe . . . and consider those three things: is it working for you, is it working for the animals, is it working for the land” and I’ll add, is it working for the trees?
In short, if you are thinking about pasturing pigs in wooded areas, silvopasture or not, be sure to think twice and plan to spend some time moving animals and fence prior to any occurrence of soil disturbance.  Proactive livestock management is always better for the pasture system than reactive livestock management.
Joseph Orefice, PhD, is an Assistant Professor of Forestry at Paul Smith’s College and he also owns/operates North Branch Farm in Saranac, NY where he raises heirloom figs, tomatoes, and beef in silvopastures. More information and contact information can be found at www.adkfigs.com.