When I sell breeding livestock – ewe and ram lambs alike – I now add the following sentence to the sale’s agreement: Seller advises STRONGLY against using Ivomec as a dewormer and recommends Cydectin or Prohibit against barber pole worms and Valbazen against tapeworms.

On occasion I receive a phone call, an e-mail, or a Facebook message that a ram lamb or a ewe lamb that I sold has died “all in a sudden”. In all likelihood, the owner missed in many cases all the signs of a heavy infestations with the deadly barber pole worm. Granted, it isn’t easy to spot for the inexperienced eye until it is too late.

What is the barber pole worm and why is it so deadly? The scientific name for the barber pole worm is Haemonchus contortus. This particular worm lives in the sheep’s true stomach, the abomasum. It thrives there by the thousands by piercing the stomach and sucking blood. That leads to anemia and often death. Anemia as a sign of an infestation can be detected by looking at the sheep’s lower eyelid which will be white or pale instead of pink or red. Another sign of infestation with this parasite is the so-called bottle jaw, an accumulation of liquid under the sheep’s jaw. However, that does not always occur when a sheep is affected. Scours, which are many times a tell-tale that something is wrong with the animal, are most notably absent. Needless to say, it isn’t all that easy to detect anything when the sheep is infested until it is too late. Hence the remark I hear that the sheep died “all in a sudden.”

Some individual sheep are more resistant than other to this worm. Young sheep or lambs are more susceptible to it than old sheep because resistance or even immunity is often obtained over time. Some breeds of sheep are more resistant than others, most notably sheep of tropical origin. Careful though when you hear the sales talk of some folks who elevate one sheep breed over any other. Their claim that their breed is more parasite resistant may turn out to be wishful thinking at best.

Here are some ideas how to manage this parasite to reduce or even avoid losses. Conventional wisdom used to be that rotational grazing will break the worm life cycle when there are at least three weeks in between grazing any given pasture. Field trials have shown that under favorable weather (favorable for the larvae that is) like moist and warm seasons the infective larvae survives far longer – in some cases months – which makes this practice a matter of the past. Still, rotational grazing can help with managing this parasite for a different reason. Most of the larvae of the worm can be found on the first four inches of any grass blade or any other forage plant. Few larvae climb higher than that. So if residual of at least four inches is left after grazing the intake of infective larvae is limited. Leaving that much residual is desirable for other reasons anyway in a rotational grazing system. 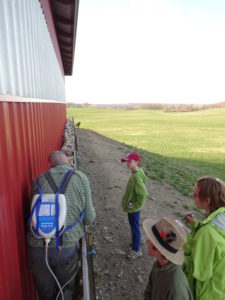 Deworming sheep in the chute with the help of my children.

If you are a small flock owner and you seek advice from a veterinarian about what dewormer to use, chances are your vet will recommend Ivomec. While my experience is anecdotal I know that in ALL cases where my advice was sought after a sheep had died the vet had indeed recommended Ivomec or the flock owner had used it on his or her own account. The question occurs why Ivomec is still recommended so often. I contribute this to two facts: First, veterinarians are often amazingly uneducated when it comes to internal parasites in sheep. Secondly, Ivomec is readily available as a drench or as an injection. On the other hand, Prohibit is far more inconvenient to use. The drench does not come as a ready-to-use solution and must be prepared by yourself by mixing the packaged powder with water. It is not available for just a few animals – depending on the weight the package is good for dozens or hundreds of sheep. (The bolus that used to be the convenient choice for flock owners with just a few sheep is no longer available). Lastly, once mixed with water it expires after three months of storage unlike Ivomec, which can be stored for a much longer time.

When it comes to deworming, a regular deworming schedule should be avoided. Unfortunately, some vets still do recommend exactly that. While I still routinely deworm lambs at the age of about six to eight weeks and my ewes around lambing when the immunity against worms is most compromised, I don’t have much of a deworming schedule beyond that. I do have a deworming plan, though. In a dry year, I can postpone deworming again until the lambs have almost reached market weight. In a wet year I need to deworm earlier. Most times I don’t deworm all of the sheep. I only deworm those that need it, especially young sheep with lambs and lambs themselves. Older sheep and heavy lambs often don’t get dewormed. Some of you may say that not deworming some sheep will lead to immediate infection of the pasture with worm eggs. Exactly. Just that these worms are likely to be susceptible to the dewormer I am using. This means my dewormer will remain effective longer.

Sheep that continuously show sign of infestation right after being dewormed get a different treatment. They end up as either sausage, stew meat, or burgers. The scientific term for it is: selecting for parasite resistance. And yes, selecting for parasite resistance as a management tool can be and should be used in any given flock of any given breed on any given farm. No matter how nice the ewe is otherwise, culling her is the best course of action in the long run.

How do I determine which are the ones that need to be dewormed? 30 years of experience tell me which ones to deworm and which I won’t. I reckon my experience won’t do you, the reader, any good. So here is an alternative: There is a FAMACHA© eye color chart available which was developed by South African researchers. The chart tells you what the desirable eye lid color is and what color suggests anemia. I am often asked if I use it and the answer is that, in a technical sense, I don’t. I find it impractical when you have several hundred sheep. It is more practical if you have a few dozen sheep or less. On the other hand, I do indeed check the occasional eye lid if I suspect infestation and I need verification.

I do want to give some words of caution here: I don’t consider this chart as bullet-prove science like the law of gravity. I have seen sheep that clearly were infested by the barber pole worm that still had a somewhat healthy eye-lid color. Likewise, I have people telling me that they used this chart and thought the sheep was healthy and then it wasn’t and died. I suspect there are also individual differences in animals. You can be certain, however, when you suspect the barber pole worm and the eye lid color is pale or even white that it indeed is that parasite.

Last but not least, here is the greater picture in all of this. Dealing with the barber pole worm is a question of managing it and living with it in your flock with little or without economic losses. There is no silver bullet that can do it all. You want to use all tools in the box to do so. Trying to eliminate this parasite is like wanting your home never getting dusty in any way or your boots never getting dirty when you go outside. It is not going to happen.