by Ken Mudge
Forest cultivation of shiitake mushrooms has become one of the most important non- timber forest crops in the Northeast. Well-established methods of cultivation, along with strong market demand for log cultivated shiitake, have made it a fairly reliable crop for experienced as well as beginning forest farmers. Yet, Shiitake is only one of a number of specialty forest mushrooms with potential for small-scale commercial cultivation. One that I’ve been working with for several years at Cornell is an exciting and exotic addition to any woodlot; the Lion’s Mane mushroom (Hericium erinaceus, H. americanum).
Forest farming is an agroforestry practice in which high value non-timber forest crops are cultivated in the unique microclimate created by an existing forest canopy (Farming the Woods, Mudge and Gabriel 2014). Forest farming is not only a way to produce mushrooms and other forest products in an ecologically sustainable way, it also brings economic diversity and additional incomes to rural areas, as well as encouraging responsible forest management.
According to the USDA National Agricultural Statistical Service, in 2012–2013 specialty mushroom growers produced over 8.9 million kg of mushrooms in the United States (indoor and outdoor). Although there are good opportunities for forest cultivation, most commercial cultivation of specialty mushrooms is indoors, which is energy and resource intensive, involving processed substrates (sawdust, chopped straw, etc.) and climate-controlled growing facilities.
On the other hand, forest farming of specialty mushrooms involves less intensive outdoor cultivation on unprocessed logs. While there is a significant amount of log-based forest production of shiitake (Gold et al. 2008), outdoor production of other specialty mushrooms including lion’s mane is extremely limited, but are an attractive opportunity for future development. This has been a focus of research at Cornell’s Arnot forest over the past 7 years. 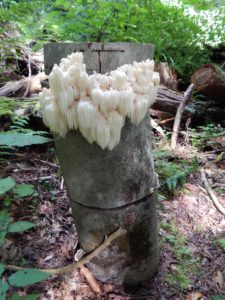 Lion’s mane (Hericium species) are common saprophytic (decomposing) fungi found on decaying trees throughout the Northern United States and Canada. There are three species of Hericium that are found in Eastern North America. They are Hericum erinaceus, H. americanum, and H. coralloides. All members of the genus produce more or less globoid white fruiting bodies (atypical mushrooms) covered in downward cascading spines. In addition to being edible these mushrooms have been shown to have medicinal properties (Abdulla et al. 2008) making them a prime candidate for the specialty mushroom market. The taste of lions mane is highly desired by chefs and is said to resemble lobster and seafood. There is currently a limited commercial market for H. erinaceus (pom pom mushroom) produced indoors on sawdust substrate, but practically no forest (log) production.
Just as increasing consumer interest in specialty mushrooms has motivated the development of improved shiitake strains (clones) that are better adapted to consumer preference, seasonal constraints, and other quality and production considerations it is reasonable to expect that strain selection and improvement will result in improvements in lion’s mane cultivation. Currently there are very few strains of lion’s mane commercially available. The long term goal of research was to evaluate the totem log production system for growing lion’s mane and to assess the possible usefulness of lion’s mane as a non-timber forest crop capable of income generation for small scale forest farms, either as a complement or an alternative to shiitake mushrooms.
In 2008, Jeanne Grace initiated this experiment as part of her Master’s degree research and the original totems inoculated in 2008 have been monitored for mushroom production each year until 2013. Her experiment was designed to compare the performance of four different strains of Hericium sp. using a totem production system. Fungal strains are clones, analogous to plant varieties. Each strain is initiated from a single mushroom propagated vegetatively on a substrate like sawdust. A strain can be repeatedly propagated for many generations.
In addition to the question of strain selection (different genotypes) on yield of lion’s mane mushrooms, which has obvious commercial implications, several other considerations were also addressed by this research including the post inoculation delay (years) before mushroom production begins, the proportion (percent) of inoculated totems that actually fruit, the duration (years) of mushroom production from a totem, and the seasonality (within year) of mushroom production. 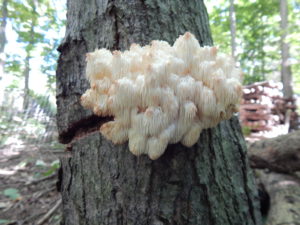 This study compared 4 different strains – one Hericium erinaceus from a commercial source designated FFP3, and 3 strains of H. americanum (He 3, He 4, and He 5) collected locally (upstate NY) and isolated in a our laboratory. The process of strain selection from a wild mushroom, involves isolation on a petri plate followed by spawn production on sawdust, and finally inoculation and eventual fruiting is shown in Figure 3.
About 30 totem stacks of American beech for each strain were inoculated with sawdust spawn. and mushroom production was monitored for 5 years. Not all stacks produced mushrooms (fruited) during each of the 5 growing seasons. The percentage of stacks that fruited for each strain was noted for each year. Table 1 shows that the percentage of stacks that fruited varied from year to year.
All three of the strains except FFP3 fruited at least once over 5 years. Seven of xx stacks of FFP3 did not fruit at all over the course of the experiment. Interestingly, a stack that did not fruit was not necessarily “dead” since most of the non-fruiting stacks during any given year, fruited during some or all of the subsequent years.
This finding, that totems from different strains do not have an equal probability of fruiting, has implication for any future commercial production because of the considerable time and labor involved in cutting down trees, transporting logs to the laying yard, and construction and inoculating the totems. The lower the probability (percent in Table 1) of fruiting of totems inoculated with a given strain the more trees must be cut and transported, and more time and effort must go into totem construction.
For example, the time and effort required to achieve that same level of production for the FFP3 strain (60% fruiting) would be considerable greater than for He 4 (80% fruiting) (Table 1), even though the two did not differ significantly with respect to yield of mushrooms. In contrast, well-managed shiitake logs typically have approximately 95% fruiting (Mudge et al, 2013). Figure 1 shows the harvested yield (pounds) for each strain for each year. 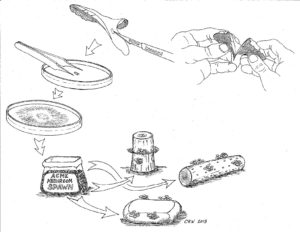 Figure 3: Isolation of a mushroom from the wild for cultivation.  Credit: Carl Whittaker

The apparent differences yield among the strains was not enough to be considered statistically significant (i.e. the variation among strains could be accounted for by chance alone). On the other hand, year-to-year differences among strains was highly significant. During the first two years (2008-2009) mushroom production was low, but fruited in earnest during the third and fourth years. Production declined significantly during the last two years.
These differences in mushroom yield among strains and the number of years after inoculation are important considerations for anyone hoping to grow lion’s mane in order to make a profit. Since there are no economic or marketing data available for forest cultivation of Hericium, and since shiitake is currently the only economically viable forest cultivated mushroom, a limited comparison between the two is warranted.
To begin with, the grower will have to wait for two years after inoculation before fruiting commences, rather than just one year in the case of shiitake. Our results suggest that yield during any given year may not differ very much among strains, although this tentative conclusion is based on only 4 strains. Yield of lion’s mane is another key consideration. How does yield of lion’s mane compare to that of shiitake? Shiitake yield varies from grower to grower, and there is very little published information about this. 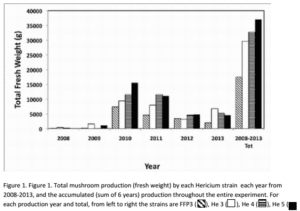 As we reported earlier in the SFQ (Winter 2015), researchers from Cornell, University of Vermont, and Chatham University undertook a 3-year SARE project Mudge et al. (2013). They worked with 13 beginner shiitake farmers and monitored production expenses and incomes for 100 newly inoculated logs. They found that after two years the average yield of shiitake mushrooms necessary to economically “breakeven” (income = expenses), was about 0.4lbs per log. By comparison, the yield of Hericium mushrooms, (as shown in Figure 1) for peak production years 2010 and 2011 was in most cases substantially greater than or equal to the 0.4 pounds per log per year threshold for established for shiitake.
Although there was no significant difference among the four lion’s mane strains with respect to the yield of mushroom per log, yield varied significantly depending on the number of years after inoculation, with peak production during the third and fourth years. Peak production levels were similar to the commercial yield of forest cultivated shiitake mushrooms. The successful forest production of Hericium mushrooms on totem stacks, and the yield potential demonstrated here suggest that this non-timber forest crop may be suitable for commercial production.
What we currently recommend to growers looking for commercial viability is to build a business and markets based on shiitake, which can be fruited more reliably. Then, additional gourmet mushrooms such as lions mane will be easily sold to pre-existing outlets, a form of “icing on the cake” for the aspiring forest farmer.
Ken Mudge is emeritus professor of Horticulture who devoted many years of his career to research and development of forest grown mushrooms, bringing their status from a hobby crop to one that has commercial viability. He recently co-authored a book, Farming the Woods with SFQ editor and colleague Steve Gabriel.
Visit www.cornellmushrooms.org to learn how to inoculate a wide range of mushrooms in your woodlot.