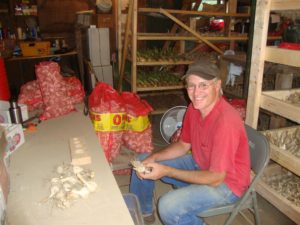 Darren Maum, vegetable and storage crop grower and self-professed “soil nerd,” is owner of Salvere Farm, located 25 minutes southwest of Syracuse, NY in Marietta. Positioned on the eastern edge of Otisco Lake, Salvere Farm enjoys the climate moderation that comes with proximity to a large body of water. Maum began with two acres of land, a half-acre of which was in production his first year, and expanded in 2009 to rent four more acres of an adjacent field.
At the business’ start in 2005, Salvere Farm sold a diverse medley of vegetables and herbs, growing up to 80 different crops by 2009, including leafy greens, root vegetables, and garlic. Maum’s local CSA and Farmer’s Market customers demanded a wide variety of products, which started to become labor and land intensive. So in 2010, Maum began to seek out wholesale markets to allow him to sell larger quantities of fewer crops. He narrowed his focus to growing garlic, onions, potatoes, and winter squash, which allowed him to put 4 of his 6 rented acres of land into cover crops. In his efforts to establish a wholesale market for his storage crops on his own, Maum solicited business from Syracuse restaurants and co-op groceries, and offered organically certified garlic seed through his farm website, salverefarm.com. His nearest neighbors are conventional dairy farms and residential properties, the closest small farm being a 15 minute drive from Salvere Farm. Thus, Maum spent a frustrating amount of time on the phone and in the car, rather than in his fields.

In 2013, Maum began working with Neil Miller, founder and CEO of Farmshed, a Central NY based company dedicated to connecting farmers and consumers under the “buy local” movement. Miller works specifically with small-scale farmers, and Maum describes Farmshed as a “low pressure” entry point to wholesale marketing, since no contract or production quotas are required. Maum gives Miller an estimate of production at the start of the season, and works hard to achieve that number, but his business relationship with Farmshed is not dictated by it. Maum provides Miller with a list of product offerings and Miller contacts buyers, arranging distribution through Regional Access channels. Thus, Farmshed absorbs the fuel costs and communication efforts that Maum found to be the biggest barriers to entering wholesale marketing. Farmshed currently picks up produce from Salvere Farm weekly, transporting Maum’s organic storage crops across New York state, from Saranac Lake to as far south as New York City, providing Maum with a wider customer base than he ever could have achieved on his own. 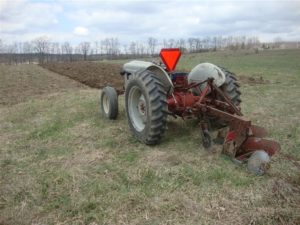 Wholesaling can help farmers invest in on-farm infrastructure and equipment, such as a tractor. Photo by Darren Maum

The switch to wholesaling has allowed Maum to move away from intensive vegetable production and focus more on land management. His silt loam soils are on the sandy side, so low soil organic matter is one of his production challenges. Since making the transition to solely growing storage crops, he has been rotating 2 acres of land in production, and 4 acres of land in cover crops of rye, vetch, buckwheat, oats, or clover, which aid in replenishing valuable organic matter to the soil. For maximum soil health, Maum regularly tests the nutrient composition of his soils and applies calcium, lime, and other certified organic soil amendments as needed. Financially, the wholesaling model has allowed Maum to invest in a potato digger and to consider additional infrastructure for the future, such as storage equipment.
Moving away from a CSA-dependent business model significantly reduced Maum’s labor costs as well. During his CSA days, he had to hire help throughout the season for planting, weeding, and harvesting, and each task required a different level of training to make sure things were done right. Now, Maum only hires seasonal labor for harvesting and cleaning, tasks for which minimal training is needed.
While overall labor costs have been reduced by the switch to wholesaling, Maum does spend more time carefully weighing and packaging his products for distribution. He sees wholesaling as a “more professional market” because of the labelling, grading, and transparency it requires, which is why wholesaling is a better primary market strategy than a secondary one. “You can’t sell your seconds,” Maum said, describing how he might be able to set aside and still sell his lower quality produce at the Farmer’s Market, something he is not able to do with wholesaling because grading and labelling of products is very important. However, Maum’s ability to sell significantly more bulk volume of product each week made adjusting to the element of quality control a no brainer. 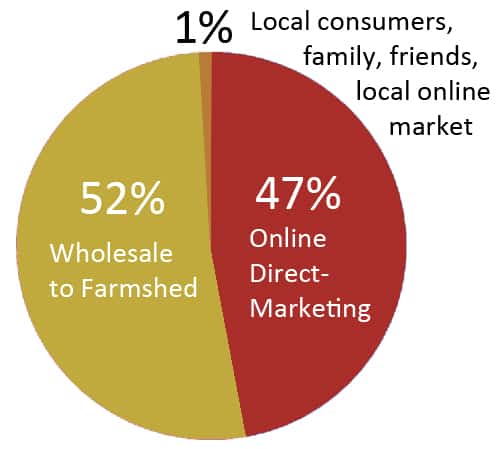 Wholesaling through his farm’s website allows Maum full control over the sale and distribution of his garlic seed, table stock garlic, garlic powder, shallots, potatoes, and winter squash, among other certified organic products. Taking orders online allows him to keep his main focus on farm production. A website is also a great marketing tool for controlling the farm’s image, projecting to potential customers Maum’s personal values, and explaining his farming philosophies and practices.
For example, the Salvere Farm website elucidates the meaning behind the business’ name: “Salvere means to be in good health, to cure and to save. It is the root of Salvia which is the genus that sage belongs to. Sage has been a medicinal and culinary herb throughout history and is the namesake herb of the farm. As one Chinese saying goes ‘How can a man grow old who has sage in his garden?’”
For more information on Salvere Farm, please visit www.salverefarm.com. For more information on Farmshed, visit www.farmshedcny.com.
Abigail Woughter served as Cornell Small Farms Program student intern during the 2013-2014 academic year. She is an undergraduate Agricultural Sciences major minoring in business and creative writing and can be reached at arw225@cornell.edu.