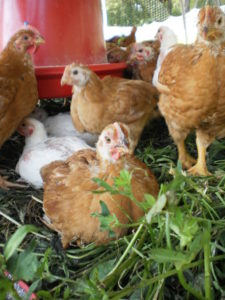 Slow and fast-growing varieties of broilers raised together in a mobile coop.

It has been many decades since broilers (chickens bred and raised specifically for meat) were a big business in New England. Broiler enterprises have started making a comeback in the region in recent years, but they tend to look very different from the standard broiler operations you’d find in Maryland or Georgia. Scale is the most obvious difference: A typical broiler producer in New England might market somewhere between 500 and 5,000 chickens per year, whereas a middle-of-the-road Southern broiler operation may grow upwards of half a million birds. Large-scale Southern and Midwestern operations raise batches of thousands of broilers in long metal broiler houses, while in the Northeast you’re more likely to find farmers moving groups of 50 to 100 broilers across fields in open-bottomed mobile coops or “chicken tractors.”
Despite these differences – or, perhaps more accurately, because of them – it is possible for a Massachusetts farmer to make more money raising 1,000 broilers on pasture than what a conventional broiler grower nets for 50,000 broilers. There is a strong market in New England for locally raised meat, and pasture-raised broilers commonly demand $4 to $7 per pound at farmers markets. While very few producers are able to grow and market enough pasture-raised broilers to make a full-time living at it, with niche marketing and smart management, a few pens of broilers can be a profitable enterprise with minimal startup cost as part of a diversified farm operation or as a supplement for off-farm income.
So, why isn’t everyone already doing this? With support from a Northeast SARE Partnership Grant, we worked with several small-scale poultry growers to track best practices and build enterprise budgets for alternative poultry enterprises in New England. Compiled from producer experiences, here are some of the common challenges for small-scale broiler enterprises in New England:
Processing 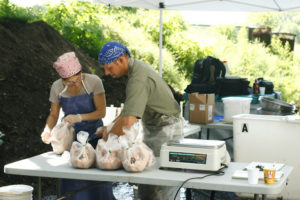 This could be a whole article in itself, but in short, the recommendation is: Before you start sinking too much money and time into starting a small-scale broiler enterprise, figure out how you’re going to get the birds processed. Legal, affordable slaughter and processing options are limited for many New England producers. There are a few USDA-inspected poultry processors in the region, and for those living within driving distance of one of these, it is probably the simplest option: Schedule with the slaughterhouse, drop off the birds, and pick up bagged, ready-to-sell product. However, the cost of processing can be an issue – the going rate is around $5 per chicken, not including the cost of making two trips to the slaughterhouse – and for some growers, hauling live birds to the nearest USDA-inspected facility just isn’t feasible. For those growers, and for those looking to reduce processing expenses and to have more control over the quality of their final product, there are special USDA exemptions that allow farmers to process their own poultry using a mobile poultry processing unit or by building their own licensed on-farm facility. This can save the producer a significant amount of money, and can even be a great marketing tool, but it can also open a regulatory can of worms (depending in large part on your state’s laws). It also means quite a bit of additional work, especially in the first year. Understanding the available processing options and which one is the best fit for you is an essential part – according to some of the producers we spoke with, the most essential part – of running a successful small-scale broiler enterprise in New England.
Managing Production Risks
The process of actually raising the birds isn’t a cakewalk, but the learning curve isn’t particularly steep – at least in terms of keeping most of the birds alive and bringing them to market at a reasonable size in a reasonable amount of time (depending on genetics, preferences, and production approach, usually somewhere between 4 to 7 pounds in 6 to 11 weeks). The most-cited production challenges relate to preventing catastrophe, particularly in the form of predators and disease losses. For non-vaccinated birds, coccidiosis was the most noticeable disease problem. Growers also observed a general tendency for fast-growing “Cornish Cross” broilers to have health problems as they approached a market weight of 7 pounds – or, especially, if they surpassed it – including a higher rate of mortality compared to slower-growing broiler varieties (e.g. “Freedom Rangers”). However, all growers agreed that the Cornish Cross birds lived up to their billing as efficient converters of feed to meat, dwarfing other varieties (literally, in some cases). Which brings us to the next challenge…
Feed Costs 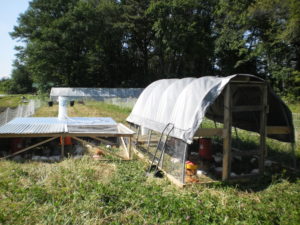 For all of the broiler enterprises in this project, feed was the biggest cost. For those buying organic grain, feed costs are especially steep. Depending on a wide range of factors, producers purchased 3 to 6 lbs of feed for every 1 lb of meat marketed. Some feed was lost to spillage around feeders, and nutritional value can be lost when feed is kept for too long or not stored properly, but a large part of reducing feed costs appears to revolve around improving feed conversion rates – that is, the efficiency at which the birds convert feed into meat. Genetics plays a large role in feed efficiency; for example, a Cornish Cross and a slower-growing broiler can both be raised to produce a 5 lb roasting bird, but the slower-growing broiler will probably need an additional 1-4 weeks – and, in the process, several more pounds of feed – to get there. Management factors also play an important role; for example, in cold temperatures, feed efficiency may be reduced because more feed is being used for body heat rather than growth.
These certainly aren’t the only challenges, of course, just the ones we heard most often. Keep an eye out later in June for a guide which will cover the results of this Northeast SARE grant, including more keys to small-scale poultry profitability. The guide will be published, among other places, on New Entry Sustainable Farming Project’s website (www.nesfp.org).
Sam Anderson is the Livestock Program Coordinator and Outreach Coordinator at New Entry Sustainable Farming Project in Lowell, Massachusetts.