Invest in a lasting repair for your architectural treasure

Are you the owner of an old empty dairy barn? Have you noticed some deterioration on the hill side of the foundation? It turns out that the heat from the long-time bovine residents prevented the water from freezing between the ramp and the foundation for the previous 100 years. With the cows gone, freeze-thaw cycles started working magic on your once sturdy building. It probably started with the rot in the sill beam that goes across the entrance to the upper floor which made the roof droop a little over where the doors used to be. This caused the gutter to drain in the same spot. The water worked its way between the foundation and your ramp and now you have a problem.
Don’t Panic! Don’t be tempted into making a form and pouring a concrete face against the crumbling part of the foundation. This would look good for a while until the concrete gets pushed also. This will either end up with your repair crumbling apart or the entire slab of heavy concrete falling inwards breaking pipes and posts and maybe your toes. 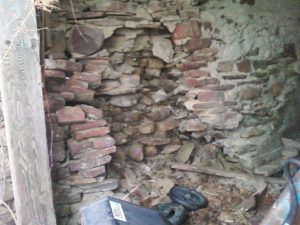 First, you should solve the problem. Stop the water from destroying your barn. You can fix the sill and raise the barn in this area to try to get the gutter to drain properly or you could take the gutter right off. Usually the gutter is no longer functioning anyway. Taking it off or having it replaced by a professional gutter company will take away the problem of the old gutter dumping all of the water from the roof right onto the area where your foundation is crumbling.


You could go a step further and install a drain tile across the area at the top of the ramp so that the water goes left and right instead of against your foundation. You could also dig the top of the ramp away and make a bridge going up into your barn. One way to repair the foundation is to rebuild the damaged area with the same rocks. A second option is to form and pour a one foot thick concrete foundation or a third possibility is to build a block wall which you can then fill with concrete and rebar.

Looking to Restore Your Historic Barn?

The Barn Restoration program was created in 2000 to help preserve historic barns and protect agricultural landscapes throughout New York. In order to qualify for an income tax credit equal to 25% of the cost of rehabilitating historic barns the following rules apply:

Since all three methods usually cost the same, rebuilding the damaged area with the same rocks makes a better looking repair. Remove the old, loose rocks until only the good and strong part of the foundation remains. Then, rebuild the wall in the same style and strength as the original. The original foundations were usually about two feet thick and very rugged. Often the wall was built upon giant boulders which can be used to build off of. The object is to have a stable, strong repair that will last another 100 years.
There are people out there that see barns in this condition every day and are experts at fixing this exact problem. There are also people who build brand new house foundations daily and are not used to this type of repair. Don’t allow a mason to talk you into just having a block wall put in to solve the problem. A block wall that has not been filled with rebar and concrete has a lot of vertical strength but almost no strength to hold back the pressure from the dirt ramp. The repair will look great to begin with but it almost certainly will buckle if there is any pressure against it.
You may also be tempted to just place lumber under the floor joists and against the crumbling wall. This, you think, will have the double effect of holding up the floor joists so you can continue to drive in upstairs and it would hold the crumbling wall in place. This would be a temporary fix at best and will not hold back the pressure from the dirt ramp.
If you end up having a good repair done and stop the water from doing any more damage then you should be able to get another 100 years out of your barn.
Boy, they sure don’t make barns like they used to! You may not know it but you are the owner of an architectural treasure. Do you think a brand new pole barn will still be around 100 years from now?
David Aman owns Stone Works and has been repairing foundations and framing in old barns for 30 years. He works in western New York and can be reached at 585-905-0998 or stoneworks14@yahoo.com.