Nestled on the eastern edge of rural Allegany County, New York, diverse Maplebank Farm is owned by David McClelland and Mei-ling Hom. Both formally trained artists, McClelland and Hom each bring a creative eye and an adventuresome spirit to their farming approach. In addition to growing buckwheat, garlic, and wild leeks, which they market to restaurants in Philadelphia, they recently started braiding strands of straw into what they termed “mushroom sculptures”. Made by curving the straw braids into a donut shape, a mushroom sculpture is inoculated for rapid mushroom production and able to fruit in as little time as a month. The mushroom sculptures provide not only a food source but add beauty to the garden and increase soil health as they decompose. 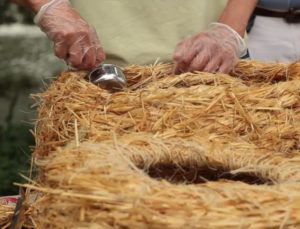 Mushroom sculpture. All photos by David McClelland and Mei-ling Hom

In keeping with their exploratory approach to new crops, McClelland and Hom began experimenting with the highly nutritious grain quinoa in the spring of 2012. Quinoa is native to cool, mountainous regions of South America and is a close relative of the common Northeastern weed lambs quarters. Gluten-free, high in protein, and well-balanced in amino acids, the easily palatable quinoa has a quickly expanding American market.

First Attempts with Quinoa
Despite quinoa’s growing popularity, production knowledge about the grain is limited.

McClelland recalls, “Driving from Philadelphia to the farm, we stopped at a grocery store to pick up some food for the farm, and they had a sale on quinoa. And we thought, ‘This is odd. You don’t find this in central Pennsylvania.’ So we bought it and brought it back to the farm. We’re cooking the quinoa and I said, ‘Do you think they’d sprout?’”

Hom laughs and adds, “So we just threw it out into the field!”

“We knew nothing about where quinoa grows,” McClelland admits. “We threw it out in the field and it sprouted like crazy, instantly. We thought, ‘Well it works, but we didn’t do this right. We need to figure this out.’”

So McClelland and Hom attended a USDA sponsored workshop on buckwheat and small grains in Big Flats, New York to learn more. There they met Dr. Elizabeth Dyck, a small grains expert who encouraged them to apply for a SARE farmer grant to investigate the feasibility of growing quinoa in New York for expanding Northeast markets. Dr. Dyck became the technical advisor for their SARE project.

McClelland and Hom experienced a positive public response after being awarded SARE funding.
“In a week of our receiving the grant, people contacted us. People are really interested in this local, New York State quinoa. They said, ‘Tell me how much it is, tell me how you do it.’ And I said, ‘Wait, we’ve just been awarded the grant. It’s December! We won’t know until next harvest time.’” 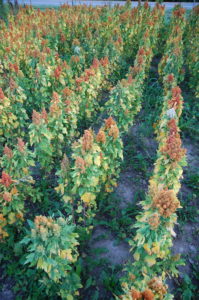 While creating local interest, the rising American demand for quinoa has also placed an economic burden on the South American countries that grow the crop, namely Chile, Peru, Bolivia, and Ecuador. In these countries, quinoa is a dietary staple of the indigenous people. Export prices are making it harder and harder for the local people to afford quinoa.

“Peru, Bolivia, and Ecuador have been incredibly successful at exporting [quinoa],” McClelland commented, “so much so that they don’t have enough for themselves.”

And with quinoa selling for up to $5/pound in the U.S., few of the South American working class can afford to buy any.

As McClelland put it, “The crop goes where the money is.”

The unfair economic burden on the countries of production over the countries of consumption helped McClelland and Hom justify the need for locally grown quinoa. Local New York State quinoa growers could earn $5/pound while reducing production pressure on struggling South American economies.

Furthermore, cold hardy and low management, quinoa bore many similarities to a crop McClelland and Hom were already growing: buckwheat. Both pseudo-cereals require cool night temperatures to set seed and are adapted to higher altitudes like that of Maplebank Farm at 2000 feet. Recognizing quinoa’s potential to grow well in cool Northeastern upland regions, McClelland and Hom were surprised by the lack of available information about its production.

“Quinoa is one of those things where whoever is doing it is sort of doing it alone without a lot of network, without a lot of resources,” said McClelland. This was a problem he and Hom hoped to rectify by thoroughly documenting and making available their findings.

A Multi-faceted Experiment: Exploring Varieties, Equipment, and Climate
McClelland and Hom used their SARE funding to purchase four named varieties of quinoa: Oro de Valle, Temuko, Shelley Black, and Faro, from seed sources in California and Oregon.  Farming organically, McClelland and Hom prepared the seed beds by tilling; no soil amendments or irrigation lines were utilized. Two sets of eight observational plots were designated on two adjoining one-acre fields. These main test plots at an altitude of 2000 feet were planted by two different methods. One field was broadcast seeded with a cyclone seeder and the other drill seeded with a wheel planter. Just up the hill at 2200 feet, the varieties were planted uniformly using a tractor-pulled drill seeder to simulate farm-scale production. McClelland and Hom planted their quinoa during the first week of May and monitored germination rate, crop growth, daily temperature, and resultant seed production rate, among other indicators, for the duration of the spring and summer. This project sought to demystify quinoa production and provide data to help Northeastern growers evaluate the feasibility of successfully producing quinoa. 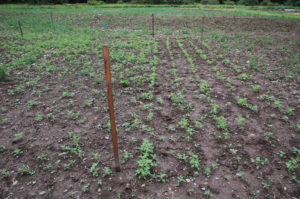 Trial and Error
The summer of 2012 proved to be a challenging growing season in Allegany County. Unusually high temperatures in April gave way to a storm in late May that left six inches of snow in its wake.

Despite the unexpected cold followed by little rain and high temperatures throughout June and July, three of the four quinoa varieties grew well and evenly, outcompeting weeds and successfully forming seed heads (Shelley Black was the outlying variety that germinated poorly and grew sporadically).

However, the early May planting date meant that the quinoa reached critical flowering during the hottest portion of the summer, which McClelland and Hom identified as the most likely reason that almost every seed head was empty come harvest. As with buckwheat, temperatures above ninety degrees Fahrenheit are known to cause blasting.

“Blasting,” McClelland explained, “is when the pollen is damaged by heat”, inhibiting proper fertilization and seed production. “And that’s why last year being the hottest year in 147 years may have been the deciding note for this project.”

McClelland also mused whether or not photoperiod contributed to the lack of viable seed.

“Beyond just the temperature problem,” he said, “maybe the photoperiod is wrong. Especially in June, the days here get really long. And these plants come from near the equator where they’re used to even day length.”

Though they failed to harvest a crop of quinoa, McClelland and Hom learned a great deal about quinoa in 2012 and are continuing trials this spring. 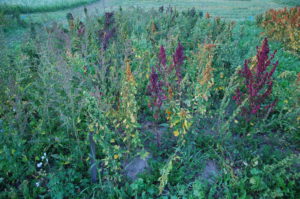 Looking Forward
This year, McClelland and Hom continue their quinoa experiment with successional planting. Every two weeks starting the first week of May and continuing until the fourth of July, they plant a small observational test plot, hoping to identify the planting window that maximizes seed production.

Last year, McClelland and Hom planted their quinoa during the first week of May when the potential for frost was relatively low. Yet the unexpected drop in temperatures in late spring had little effect on the quinoa, leading them to believe that a different planting date could be the solution to seed production issues.
“Maybe by planting them before you have your last frost date,” McClelland reasoned, “you could have them mature before you have your hottest temperature.”

This is what McClelland and Hom seek to discern from their successional planting this year. If successful in getting a viable seed crop, Hom sees many more questions that must be answered.

McClelland and Hom specifically want to find out if they can harvest their quinoa crop with the same combine used to harvest the buckwheat they already grow, which would make the addition of quinoa onto a Northeastern grain farm all the more plausible.

To learn more about SARE project FNE12-760, download a brochure and the final report.

To follow along with ongoing quinoa research at Maplebank Farm, contact David McClelland and Mei-ling Hom at meilinghom@yahoo.com.