Anaerobic Digesters: an opportunity for farms to use manure for energy production, bedding and fertilizer 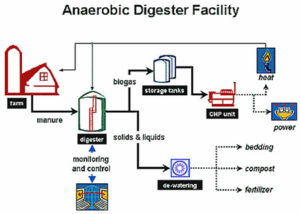 Anaerobic digestion systems for dairy farms are growing in popularity across the United States. In July 2010, the EPA estimated that 157 digester projects were operating on a commercial scale nationwide. Of those 157 digesters, 22 were located in New York, making it the second leading state in operating digesters in the country. Today, New York’s number has grown to 23 digesters, with 3 sites in the planning and implementation process.

There are a few important questions that you should be asking yourself right now. What is anaerobic digestion, how does it work, and why should I care? Let’s start with the first question and move our way through to the end.

Most basically, “anaerobic digestion is the process where plant and animal material is converted into useful products by micro-organisms in the absence of air.” The useful products from the digestion process are biogas and digestate. Biogas is made up of 60% methane, 40% carbon dioxide and small amounts of other gases. Digestate is a wet product that is comprised of plant nutrients and partially decomposed organic matter. Remember these terms, since this article will revisit the usefulness of biogas and digestate shortly.

Of those 157 digesters found nationwide, 143 digester systems are farm-owned and operated and use only livestock manure. On a fifth generation farm in Maine, the manure waste from their 1,800 cow dairy production is plowed from the barn floors into a nearby pumphouse where it is pumped to the farm’s anaerobic digesters. The digesters are two containers, which resemble silos, that each holds around 400,000 gallons of manure.

The temperature in the digesters is set at the optimal degree for the naturally occurring bacteria found in the cow manure, 104 degrees. At this temperature, the bacteria are able to feed and multiply. The manure mixture begins to exude biogas, one of the useful products of anaerobic digesters. As the biogas exudes, it collects in balloon like rubber caps which creates sufficient pressure to move the gas along to a 1-megawatt generator.

Once at the generator, the biogas can be used to produce several different forms of energy. Some anaerobic digesters are designed to combust heat from the biogas. This heat can be used to warm buildings or hot water. It can also be used to heat, dry or process agricultural feeds. Application in greenhouses is yet another use for the heat.

When anaerobic digesters are designed to produce electricity, it is not uncommon for the system to produce more electricity than the farm can use. Generally, farms are interconnected to the grid. This interconnection to the grid acts as a battery for the farm. Since the number of animals on the farm may change over time, so will the availability of manure. At times when the farm cannot meet its own electric demands, then it can rely on the grid. In the event of access electricity then the farm will feed into the grid and the extra will be used by other consumers.

On the 1,800 cow dairy farm in Maine, the anaerobic digester is designed to produce electricity. Given their size, the generator runs almost constantly and is only shut down during times of maintenance and repair. Since the pumping system is automatic, when the pressure in the digester starts to drop then more manure is pumped into the digester, allowing it to operate continuously. In its first 13 months of operation, the 1,800 cow dairy farm generated 5,200 megawatt-hours for the grid. Now that all the startup concerns have been addressed, the digester is operating smoothly, and the farm has learned the system, the facility is projected to produce about 8,000 megawatt-hours for the grid each year.

As the mixture within the anaerobic digester breaks down the spent material leaves the silo like containers and enters a liquid separator where the plant materials are separated from any remaining liquid. The dried plant materials are used on the farm for cow bedding. The liquid material is sprayed on the fields and serves as a nutrient source to the soil, as would raw manure.
There are several benefits to spreading the liquid product from anaerobic digesters that range from neighbor satisfaction to nutrient management planning on the farm. The liquid material has significantly less order than raw manure resulting in fewer neighbor complaints. The lack of manure smell allows the farm to spread in the summer and on fields previously skipped due to neighbor proximity. Finally, the crops are able to more readily take up the nutrients provided in the liquid material.

Planning for and installing an anaerobic digester on a farm is an expense to be considered. Depending on the size of your farming operation, the costs will vary. However, when thinking about whether or not an anaerobic digester is right for your farm, do not overlook the current incentive and funding opportunities that are available.

NYSERDA “offers funding incentives for farms in New York State to produce electricity from biogas generated from treating farm wastes in anaerobic digesters. By increasing the generation of electric power from biogas, New York farmers can advance the achievement of New York State’s goal of using renewable sources for 25% of its electric power sales by 2013.”
Some incentive and funding opportunities provided by NYSERDA include:

Since programs change over time, please be sure to contact agencies directly for updated information.

Further information and information from this article can be found at: www.manuremanagement.cornell.edu.