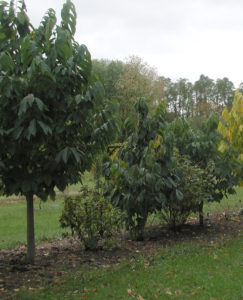 Interplanting of two uncommon fruits, pawpaw and black currant, the latter of which are shrubs that tolerate shade. Photo by Lee Reich.

When small farmers consider planting fruits, their thoughts typically turn first to apples. After that, peaches, plums, and other familiar fruits may come to mind. In this two-part article, I’d like to make a case for considering growing some uncommon fruits in addition to, or instead of, these more common ones.
One major problem with growing common fruits is pest management, especially in the case of apples in the Northeast.  Also, these fruits have been commodified. Apples are generally sold as red or green orbs, and they can be grown just about anywhere, some places more easily than others. Why put so much effort into growing fruits that are beset by pest problems and that can be easily grown and shipped from elsewhere?
Many years ago, while working for the USDA and then Cornell University, I became interested in some uncommon fruits notable for their pest resistance and for their unique and delectable flavors. These fruits – pawpaws, gooseberries, and hardy kiwifruits, for example – have all been enjoyed in other parts of the world for some time. They’re not well-known because much of our agriculture and eating habits still reflect our mostly European, especially British, heritage.
Some reasons, then, to grow uncommon fruits on small farms and homesteads are:

Besides providing fruit to enjoy and sell, most of the trees, shrubs, and vines that I’m going to describe also make nice, ornamental farmstead plants. All of them are cold-hardy over much of the country; I’ve grown them for many years in the colder part of Zone 5 in New York’s Hudson Valley. Unless otherwise indicated, a fruit is self-fruitful, not requiring a second variety (or another clone) pollinator. 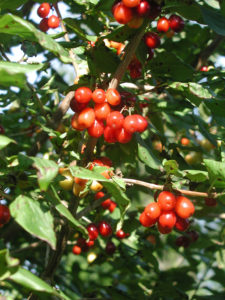 Cornelian cherry is an ancient fruit that bears reliably with little care. Photo by Lee Reich.

Cornelian cherry (Cornus mas, Zones 4-8) is a fruit that has been eaten by humans for about 7,000 years. It was enjoyed by ancient Greeks and Romans and appreciated throughout the Middle Ages and up until about 150 years ago. It’s a dogwood species whose fruit is a dead ringer for a tart cherry, with a similar flavor. But Cornelian cherry is much easier to grow because few pests attack it and, despite blossoming very early, bears reliable, annual crops. The very early warming trend and subsequent late frosts during the spring of 2012 hardly made a dent in the crop on my tree, although these conditions devastated apples and other fruit crops.
There’s not much to write about growing the Cornelian cherry. Plant two varieties for cross-pollination, weed and water the young plant, prune for good structure, and harvest in midsummer. Many people do not like the tart flavor straight up but it is wonderful for making jams, sorbets, and other value-added products. Fruits are easily harvested simply by shaking the branches.

Alpine strawberry (Fragaria vesca, Zones 3-10) was one of the strawberries of antiquity that were eaten before the 18th century, at which time the modern strawberry arrived on the scene. Alpines differ from modern strawberries in that the plants are smaller, lack runners, and are everbearing; the fruit is the size of your fingernail but very fragrant, redolent of pineapple.
Start from purchased plants or from seed; plants bear their first season from seed. A number of varieties are red, and a few are white. I prefer white varieties because the birds pass them up, but the fruits need to be dead ripe for best quality. The ripe fruits are very fragile so are best suited for local marketing — perfect for a small farm.
Like any herbaceous perennial, alpine strawberry plants get old and woody after a few years. Either divide the plants or start new ones from collected or bought seed. 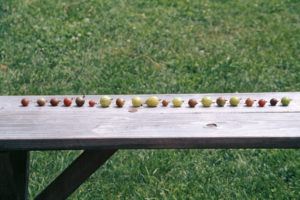 Gooseberries show a range in color, size, and flavor. Photo by Lee Reich.

Ribes – the genus that includes gooseberries (Ribes spp., Zones 3-7) and black currants (R. nigrum, Zones 3-7) – are shrubs of northern regions, very tolerant of cold and even shade, and deer resistant. Both fruits are very popular in northern Europe, where they feature prominently in cuisine. The plants grow as bushes about four feet high and wide.
Gooseberries have gotten a poor rap in the U.S. because of inferior varieties generally available for sale. I grow “dessert’ varieties of gooseberries, making them, as one writer of yore put it, “the fruit par excellence for ambulant consumption.” Flavor of the best varieties is reminiscent of grape, apricot, and plum. For the best flavor and disease resistance, I’d recommend the Poorman, Black Satin, Red Jacket, Glendale, Captivator, and Hinnonmaki Yellow varieties.
European black currant, a currant with real commercial potential, is very susceptible to a rust disease that also threatens white pines.  As such, it was banned and has been relatively unknown here. In the last few decades, however, a number of varieties have been developed that are resistant or even immune to the disease – and currants are now making a comeback. The best of these, in my experience, are Belaruskaja and Titania. I eat these right off the bushes, but many people find the fresh flavor too distinctive and strong. Even so, most everyone enjoys black currants in juices, jams, liqueurs, chocolates, and other products, both for their rich flavor and for their extremely high levels of vitamin C.
Currants and gooseberries require similar growing conditions. Permanent mulch provides the cool, moist soils that they enjoy, and annual pruning to remove old wood and a portion of young wood keeps a plant fruitful. Black currants bear best on one-year-old wood, gooseberries on two- and three-year-old wood.
Stay tuned for more uncommon fruit recommendations in the Summer Edition!
Lee Reich, PhD is a farmdener (more than a garden, less than a farm) and consultant in New Paltz, NY.  More information on uncommon fruits can be found in the book Uncommon Fruits for Every Garden by Lee Reich (Timber Press, 2004) or by contacting Lee Reich, 845-255-0417 or garden@leereich.com.