When I first moved to Madison County in central NY, I was surprised to learn that very few farmers were selling products in the NYC market. In my fresh perspective, connecting upstate farmers to NYC seemed like a fairy tale waiting to happen.  Madison County had rolling hills that were not being plowed under to create quarter acre lots, farmers who genuinely wanted to farm these hills as well as the lowlands in between, and plenty of businesses that sold things the farmers actually use. On the other end of a relatively short 4 and a half-hour trip was one of the most dynamic and demanding consumer markets for food. So, in my first few months of running a Cornell Cooperative Extension program aimed at expanding marketing channels for farmers, I focused on learning how to connect farmers to the NYC market, calling on Baldor, Red Jacket Orchards, GrowNYC/Greenmarket, the Park Slope Coop, Pampered Cow, and…..in fact, I called pretty much every person I knew that bought or sold local food in NYC. 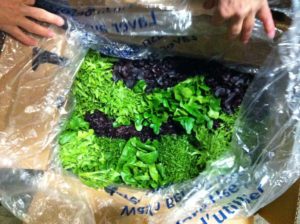 This mixed lettuce pack is an example of how a packing house and storage facility could allow growers to package their products to make them more attractive to restaurant and other institutional buyers. Courtesy of Beth McKellips.

More than once, I filled my Subaru with Madison County-made Kriemhild Meadow Butter and headed to the city to disperse rack cards touting all kinds of Madison County products everywhere I could.  In a matter of months, I had made a rather complete circuit of the local food scene in NYC. I told everyone I met that it just has to be easier to help upstate farmers sell food downstate. I naively assumed that if I built it, they would come.
My whirlwind  tour of the NYC local food market recently culminated with organizing a panel of wholesale buyers and distributors who have stated interest in purchasing food grown in New York State.  Upon reflection of the dialogue that unfolded at this panel and my self-guided tour of the NYC local food sector, I was, in a word, wrong. There are significant structural changes needed that are much deeper and complex than creating marketing campaigns to connect the dots of upstate production to the downstate market. It is not impossible for farmers outside of the Catskills and Hudson Valley to burst the NYC bubble, but it is not easy. There are very real and tangible reasons why almost all the farmers I meet in Madison County and central NY ask for help with marketing and talk about how they need to sell more product, and on the flip side, there are concrete reasons that more stores, restaurants and institutions in NYC don’t buy more food grown in New York State. Overcoming these obstacles is not going to happen quickly or without considerable effort and most likely will require some government intervention. The following is a brief description of where to start.

Step One: Physical Infrastructure
The need for physical infrastructure in the form of a distribution hub where products could be aggregated, packed into marketable packages and stored to preserve freshness before making their journey to market in a re-fridgerated truck, quickly emerges as one significant missing link.  Farmers are typically financially leveraged to their full capacity and tend to be asset rich but cash poor. Consequently, most farmers lack the ability to borrow capital to purchase these extremely expensive storage and transportation systems without taking a serious financial risk and going into deeper debt. A publicly funded distribution hub (or a public-private partnership) would open the door to markets of magnitude to upstate growers with one fell swoop.
The buyers at the local food buyers panel mentioned purchase volumes along the lines of a quarter million dollars worth of produce. Each buyer at the table indicated a desire to purchase more product grown in New York. However, these food outlets need a consistent supply for logistical reasons and to meet consumer demand. Also, even though at first blush it might seem easy to assume that most stores in NYC want to buy pallet upon pallet of products, many specialty stores in NYC and Brooklyn have limited storage and refrigeration capacity due to small scale of the NYC urban fabric. Consequently, they need to order often and have products be delivered in small batches. The combination of the need for consistency and to receive products in small doses compounds the need for physical infrastructure upstate, where product can be consolidated from multiple sources, stored and repacked without losing quality. 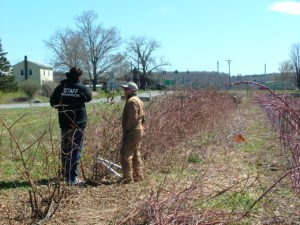 Lastly, while there are some shining examples of food distributors who work with food produced outside of the New York City market, such as Regional Access and FingerLakes Farms, as the price of energy grows, their ability to pick up products from multiple farmers, especially low-volume producers, is going to be an uphill battle and they might increasingly need product aggregation.

The Other Step One: Technological Infrastructure
One of my favorite moments from the recent local food panel was when a Cornell Cooperative Extension colleague asked the buyers, “I assume you all have farmers calling you all the time, right?” and the entire panel shook their head no. While this baffled the agricultural professionals in the room who tend to receive these calls daily, this exchange highlights another significant need in building a vital regional food system, technological infrastructure. While some farms have grabbed the internet and social networking bull by the horns and have done quite well, traditionally, the non-commodity agricultural sector has come relatively late to the technology party, especially in terms of consumer-friendly websites with robust databases that allow customers to purchase local food. The lack of development of online technology is due to several complex factors beyond the scope of this discussion, but include the scarcity of capital not tied up in production, lack of technical knowledge, and the labor and time demands of farming that don’t allow for a plenitude of screen time. Farm websites in rural areas tend to be behind the times in both design and functionality. On the flipside, local food buyers in the city don’t know where exactly to turn when they want to find a product produced in New York and usually depend on what their distributors can bring them. Store and market managers, institutional buyers and local food distributors need to have viable options for finding local products at their fingertips (literally) and this database needs a robust backend that can support real time inventory changes. We need a business-to-business “facebook” for food. There have been several inroads in this realm, and many more are in development, but for now the non-commodity farming industry remains a bit in the technological dark ages.

To Be Continued….
The story of upstate growers beyond the Hudson Valley and the Catskills region providing products to the demanding downstate market does not appear to have a fairy tale ending at the moment. While NYC is far from the only viable market for central NY farmers, the sheer volume of NYC demand highlights how a happier ending is within reach if policy makers, developers and/or the private sector could work together to create the physical and virtual infrastructure needed to connect upstate growers with the NYC market. Fulfilling these needs would allow farmers to focus on farming and producing the best food they can. At the local food buyers panel, the agricultural professionals in the room had potential to connecting over 1000 farmers with the local food buyers who spend over $150,000 annually on produce on the low end. Frankly, I would be surprised to learn if even one sale was initiated at this panel.  It’s time to quit putting out the fire one bucket at a time and bring on the hose, in the form of publicly-funded infrastructure that will bridge the gap for the farmers to the large, practically insatiable NYC market.

Beth McKellips is an Agricultural Economic Development Specialist with Cornell Cooperative Extension in Madison County, where she creates programs to connect farmers with marketing opportunities, diversify through value-added products and provides business and technical support. She can be reached at 315.684.3001 x 126 or at bam233@cornell.edu.
Posted in Small Farms Quarterly