I Love My Pasture!

By Denise Timms
This article was one of four winning entries in a writing contest sponsored by the New York State Grazing Lands Conservation Initiative (GLCI).  GLCI is led by a Steering Committee of farmers and agricultural professionals to promote the wise use of private grazing lands, and is funded by the USDA-Natural Resources Conservation Service.
James and I moved our family to Madison County from Long Island in September of 2006, after leaving jobs that we had been at for over twenty years each.  We were finally going to live our dream on 36 acres of pasture and woodland in a house we built a few years before. 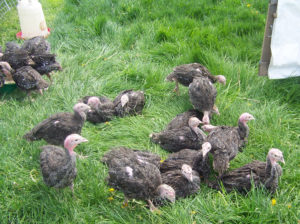 We were lucky enough to find jobs, but what were we to do with thirty-plus acres of pasture?  In the past, we had some local folks that cut and took the hay as we had no use for it on Long Island.  But, what to do now?
I had a bit of an agricultural background mostly with small livestock, a semester and a half of night time ag classes at SUNY Farmingdale and fourteen years of hands-on experience at two public education farms, both on Long Island.  James had been on the grounds crew at the Shoreham Wading River School District for eighteen years, twelve of which we worked together.  One of the farms I had worked at was located at the Shoreham Wading River Middle School.  I was there for eleven years.  Unfortunately due to the loss of some of the district’s tax revenue, the farm at the Middle School had to be closed.  The district was kind enough to move me to the grounds department, and although I was grateful to still have a job, I wasn’t quite sure that maintaining athletic fields was going to be my cup of tea.  I gave myself six months.  Twelve years passed.  Being the people we are we weren’t happy just cutting the grass – we had to do it all!  We learned a lot about grass: growing, maintaining optimum cut height for healthy turf, etc.  We went to seminars, got our Pesticide Tech certification (which we rarely had to use due to our management practices), and talked our supervisor into letting us do all the fertilization, over-seeding, etc.  We already had all the equipment to do it, and we could save the district some money by not having to contract out those jobs.  We found out that we could grow some pretty good grass!  What we hadn’t realized was how well the jobs we had on Long Island were preparing us for life in central New York State!

I love my pasture! Photo by Denise Timms

So, we decided to get a couple of Herefords.  I have always loved them, and the thought of raising our own beef appealed to us.  We got a bred cow and her seven month old heifer calf.  It was a little rough going at first but that’s another story!  However, because of the “mishaps” with our first cow experience we met people that would introduce us to something we had never really heard of – “grass-fed beef”!  We no longer had to worry about what to do with thirty-plus acres of pasture.
Soon after I was able to attend “Grasstravaganza” in Binghamton, NY and I was hooked!  It was there that I met Madison County’s own “Grass Whisperer”, Troy Bishopp.  We’ve learned so much from him, from rotational grazing to installing a high tensile fence for our permanent/winter pasture.  At this point we rotationally graze using temporary fencing, in the open pasture, usually attached to the permanent fence.  We also section off the high tensile pasture so we can rotate them in there too.
The pasture walks we have attended, organized by Troy Bishopp, have been invaluable.  All of the plant species that we did not appreciate in our athletic fields (we did make sure we had some clover as we returned our clippings) have true nutritional value to the animals that we graze.  Weeds in our pasture? Absolutely!  Lots and lots of clover in our pasture?  You bet!  We wouldn’t have it any other way.
After we got settled with the cows, we decided to add some turkeys that we would raise as gifts for family.  They were quite happy eating not only their grain, but the pasture’s offerings.  Due to the ingenious invention of electric net, we raised our first small flock of turkeys on pasture with great success.  We now raise about seventy-five turkeys and around one hundred Cornish Rock crosses on pasture that we rotate as well.  Yes, they do need to get grain, but about thirty percent of their consumption is pasture.  They are happy and healthy and grow extremely well, and you should see the grass they can grow!
I’m not through just yet!  What started out as a 4-H project has turned three sheep into a pastured flock of thirteen sheep that we raise primarily for fiber.  They are also the lucky recipients of new pasture every few days.  Their fleece is so much cleaner than it would be if we fed them hay all year. 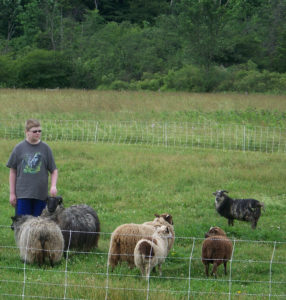 The sheep as well as the cows give birth and raise very healthy, happy lambs and calves being fed our grass, our own hay and of course minerals.  We love watching the “families” interact.  It is really some of our best entertainment and my personal stress-relieving activity.  We were told that turkeys (the commercial type that we raise) don’t preen or take dust baths.  We have found that out in the pasture they are given the opportunity to engage in natural behaviors and they do!
We found out about the CREP (Conservation Reserve Enhancement) program through a Cooperative Extension seminar.  We are now in our second year of a ten year contract through Madison County, now installing our riparian buffer.  CREP is allowing us to improve our own program by installing practices that we probably wouldn’t have known to do, and helping to attract and protect wildlife, the environment, and the Chesapeake Bay.
Well, I think that I have answered “But, what to do now” with thirty acres of pasture.  Raise happy, healthy animals of several species while having them fertilize the fields, provide food for the family while providing us with a great way to meet new people.  And, let’s not forget all the entertainment!  Life is good!
Denise Timms grazes beef, sheep, and turkeys in West Edmeston, NY.
For more information on the Grazing Lands Conservation Initiative please contact Karen Hoffman at 607-334-4632 x116 or karen.hoffman2@ny.USDA.gov.  For assistance with planning or starting up a grazing system contact your local USDA-NRCS or county Soil and Water Conservation District.