By Mason Donovan
In the beginning of our humble American nation, we had strong communities tied around local family farms.  As we grew in population, the farms decreased along with the community connection.  There is a resurgence lately to not only source locally, but to once again re-establish our communal connections to farms and each other.

Growing your own agricultural based community may seem as overwhelming as starting a farm. It is all about seeding, growing and harvesting.
Seeding: Intended crops must be sown thoughtfully and with a plan.
• Gather some like-minded friends over local food and discuss what you would like out of a community.
• Write down the key points of this conversation and send it out to the group within the next few days. Ask them to share with their friends.
• Search for existing organizations which may already be providing this service. Start first with your local Ag Extension: http://www.csrees.usda.gov/Extension/
Growing: Be your own farmer of community and support the growth.
• If your community does not have small farms, seek out ways to create them. Beginning with community gardens is a great start. Petition your town to provide an acre of town land for a garden.
• Create an online membership to aid in cross communication. Facebook is a great place to start for free.
• Actively seek out small farmer opportunities by reaching out to your local small farm educators such as the Cornell Small Farm program: https://smallfarms.cornell.edu/
Harvesting: Reap the benefits of community by getting involved.
• Community is all about being involved. Attend local Ag education workshops. Join your town or county Ag board.
• Support your local farmers by shopping locally and helping out on the farm.
Like a pumpkin patch, involved active agricultural based communities do not sprout up out of nowhere. If not seeded and cared for, all you will get is a field of weeds.

A little over a hundred years ago, agriculture was the center of community, serving up sustenance and conversation at the dinner table as well as social interaction at the market and farm stand.   It was also the major source of income. In the late 1800’s over 70% of the US population was employed in agriculture.  Today, it is less than 3%.  The loss of local small farms has had a dramatic impact on the quality of diets and society.  One movement to reverse this trend is the Locavore movement.  It has gained momentum in the last few years helping us understand the importance of locally sourced food.  What has been over looked in this movement, is the correlation of the loss of local farms to the decline of a closely woven community.
As social media connects us to our primary school classmates, old flings and even our next door neighbors, many are waking up to the fact that there is something really missing in our lives that cannot be fulfilled by status updates and virtually posting our realty.  How do small farms fulfill this void?  I brought this question to a couple of enterprising farmers, Ryan Ferdinand and Mike Hvizda.  Ryan and Mike began the creation of Phoenix Hill Farm in Boscawen, NH in 2010.  At the time of their purchase it was a 5 acre parcel on a wooded hillside with a house which showed its over two centuries of use.
Phoenix Hill Farm was destined to become more than a farm.  They wanted it to reach back in history to a time when social interaction between farmers and residents translated beyond a commercial transaction.  It was a long and deliberate path to this goal.  Ryan’s desire to connect with others and the earth led her through living on an organic farm in England to a potential chef career and a brief period as a founding art teacher at a charter school.  Mike’s interest in agriculture was inspired by his tri-athlete father who was very conscious of his food intake.  It was further cemented living in mid-west towns where healthy living, from food to exercise, was an encouraged way of life.  Both Mike and Ryan eventually found themselves living on a permaculture farm in Tyngsboro, MA.  It was on this property where they started to formulate the idea of Phoenix Hill Farm.
Like a well seeded row, ideas grew quickly and started to bear fruit.  Agricultural challenges such as clearing land led to even better solutions; free range pigs.  Mike and Ryan led countless educational walks for visitors around the grounds to explain the benefits of sustainable permaculture.  Each visitor helped to not only formulate the realization of the farm, but started to create a community of friends, customers and farm participants.  It was this later fringe benefit, they both found to be the most fulfilling. 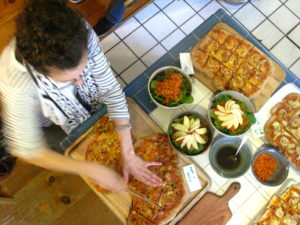 A day of farm work ends with a homemade pizza party. Photo by Ryan Ferdinand

A quick look at their Facebook page may have you think they already had a community before the farm.  Although they were very active in social media with hundreds of likes and friends, Ryan said it can “give you an illusion of being connected because of the hyper-communication.” Mike saw the online connections as a valuable resource, but he believed “community was made in person.”  What better way to start making the community, than to start from the ground up?  The days of farmers networking to support each other is not gone, but can sometimes feel like a bygone era.  Mike and Ryan started a network of like farmers to help each other.  The work share and suppers became aptly named the “Wuppers Club.”
There are those who believe Robert Putnam’s book, “Bowling Alone”, about the collapse of the American community has to be outdated because of our virtual connections.  He details organization after organization whose membership has been on a rapid steady decline (Elks, BoyScouts, churches of every kind, PTA, Odd Fellow, etc. etc.).  But our virtual communities are expanding exponentially for every generation.  Over 80 million people have signed up to play the virtual farming game, Farmville.  Think about that.  The amount of people interested in spending their free time virtually farming is approximately equal to the same amount in the late 1800s who were actively involved in American agriculture.  Although less than 1 million people in the US claim farming as an occupation today, the need to connect to agriculture has not diminished.  In NH alone, winter farmers markets doubled from 2011 to 2012.  New markets such as the Tilton farmers market are attracting over 1,000 visitors every Saturday.
Like the fringe community benefit of Phoenix Hill Farm, these farmers markets are reconnecting us to our food source and our neighbors.  It is a place to commune, be educated and share a connection.  Unique community building ideas are exploding.  As of the writing of this article, 7 local artists in the NH lakes region have teamed up with 16 farms to create original works of art to support local agriculture.
As Ryan and Mike look towards the future, they envision a pick-your-own CSA where the consumer can be part of the process.  They also are working on plans to build an institute which provides apprenticeships and community rooted in agriculture and art.  Mike adamantly believes, “one has to consciously make their community,” and not wait for the community to form around them.
Studies have shown millions of Americans are becoming addicted to their texting and online posting communication.  Their brain waves illustrate a starvation for interaction.  Look around at the next farmers market and see how many people are not texting or deeply absorbed in their mobile devices.  You may be pleasantly surprised to find what we are really starving for is good food and good company provided to us by our small farms.
Mason Donovan owns a hay farm in Boscawen, NH and founded The Yard Project. The Yard Project is an agriculturally based organization to promote healthy connected agrarian communities. Visit www.TheYardProject.com for more info. He can be reached by email at Mason@TheYardProject.com