Grow Berries for All Seasons

There are many reasons that growers would choose to extend the cropping season for berries.

Blueberry, raspberry and strawberry varieties for an extended season. Photo by Cathy Heidenreich

The earliest berries notably capture the best market prices – which is what growers strive for.  On the latter end of the season, there may be late season marketing opportunities, and certainly creating as long a time as possible for berry sales is a good thing.  Season extension techniques may improve yield, fruit quality and shelf life, and possibly allow us to grow a wider variety of berries, all attributes that growers and consumers can be happy about.

When season extension is discussed lately, it often includes plant manipulation techniques, like tipping raspberries or removing blossoms of strawberries, or it might refer to environmental manipulation like using row covers or high tunnels to temporarily provide protection from an unsuitable environment.  The easiest thing a grower can do to extend the berry season is to choose to grow berry crops that compliment each other seasonally, and then choose varieties that provide plentiful, high quality berries throughout the harvest season.

The following summaries are meant to be examples of the way a grower could choose overlapping varieties that would keep fresh, nutritious berries in front of his/ customers for the longest possible time – without doing any crop or environmental manipulation.  As customers come to rely on local farms for their fruit needs, that will provide the incentive for more elaborate season extension efforts.

These summaries are not inclusive.  There are dozens of varieties that could be substituted for the ones mentioned below.  Growers should always try different varieties as fruit characteristics may differ between locations.  Additional information about these and other varieties as well as the nurseries where you can order them is located at https://smallfarms.cornell.edu/berries/

The earliest berries in New York State are strawberries.  Traditional June bearers and Day Neutral strawberries begin producing in May or June, depending on the microclimate.  In cooler regions and with good variety selection, June bearers will continue into July, but day-neutrals will provide customers with fresh strawberries into October throughout most of New York – with just a bit of attention to frost protection. 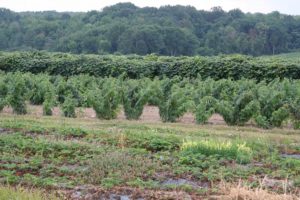 Additionally, many other berry crops will start production in July including blackberries, blueberries, currants, gooseberries and raspberries.  Many of these can continue into September and possibly longer if the correct varieties are chosen and with slight modifications to environment.  Elderberries ripen in August and hardy Kiwifruit, soon to be very popular with consumers, is a great addition to the September market table.

Choosing the best berry varieties is not an easy task.  There are hundreds of options, all touted to be the most delicious and productive.  Growers need to consider local customer preferences in addition to pest resistance, vigor and timing.  The lists in Figure 1 may provide you with ideas for new varieties to try next season.

Many of the berries in Figure 1are familiar to growers, but the key is to have some of all varieties so that you can prolong the optimum harvest window.  The area where many growers may be surprised at the varieties listed is in the fall raspberries.  Most folks are still relying on Heritage to pull them through the autumn, but this is a mistake as the new varieties offer significant advances in earliness and fruit quality.  The overall yield of these newer varieties will not approach Heritage, but having some nice looking early fall raspberries may encourage late summer pickers to return. 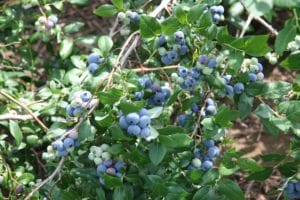 The chart also does not mention Day-Neutral strawberries.  In New York, day neutral production relies largely on 4 varieties: Albion, Evie 2, Seascape and Tribute.  Using these varieties in a number of different field or high tunnel production systems will add a great deal to berry season extension.

The blueberry variety plan is the most reliable in season stretching mainly because blueberries last so well on the plant.  Still, in a year like summer 2010, the sustained heat really shortened the season, so most growers did not harvest much of anything past the 2nd week of August.
Farmers in cold areas may get excited when they see the primocane blackberry varieties listed.  Prime-Jim and Prime-Jan have been around for several years and offer the cold climate berry grower the possibility of getting blackberries in normally un-hospitable zones.  The problem is that these varieties still need a VERY long growing season before they can be harvested.  In a 2008 Massachusetts study, both of these varieties started bearing by Sept 15th and were finished by early October in the field.  Compared to the same planting design under a high tunnel, which yielded 2.5 times more fruit that same season, it still suggest that some type of protection would really help fall bearing blackberries. 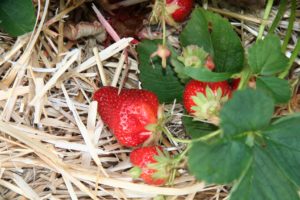 Summer blackberries likewise may need some environmental or plant manipulation in many NY regions, but for growers in Zones 5 and warmer, these plants offer a product highly desired by health conscious consumers.
Ribes, currants and gooseberries, are very popular with certain ethnic markets, but growers would profit by putting a bit of extra effort into marketing these fruit.  Currants and gooseberries are featured in many cooking magazines and make great preserves.  Black currants specifically have very high anti-oxidant levels and could be marketed to those folks that have home juicers.

The possibility for making the most of your berry season begins with your winter order.  Take plenty of time to look at the fruit you offer over the entire season and try hard to avoid dead zones when no fruit is available.  Northeast growers will have to work hard to meet the local demand, but the end result will be worth it.

Double Gold produces a deeply blushed, golden champagne-colored fruit with a distinctive conical shape, earning the “double” in its name for its two harvests per season. The first year of planting, the initial crop is produced in the fall on the tips of that year’s canes, and a second crop is produced farther down the same canes the following summer.

Small quantities will be available late this summer, and North American Plants expects to have enough plants to meet the anticipated demand of each variety by the spring of 2013. Plant patents will be filed later this year.