Then he found the CoolBot.

When he started Early Morning Farm near Ithaca, N.Y. in 1999, he built a small, eight foot by ten foot walk-in cooler powered by a small refrigerator compressor. With the continued success of his vegetable CSA, two years ago he found it necessary to build a bigger cooler, but couldn’t afford the thousands of dollars it would have cost for a larger compressor. He had a dilemma – without the cooler he couldn’t grow and harvest more vegetables, but without larger harvests he couldn’t afford a bigger cooler.

After doing some research, he decided to try the CoolBot, a thermostatic controller that turns an off-the-shelf air conditioner into a compressor for a homemade walk-in cooler, which would save him thousands of dollars and still keep his produce fresh and cool.
Weeks later, Burkett built a larger eighteen by nineteen foot cooler around his original cooler, powered by the CoolBot, and started hauling in vegetables within hours.

“Not only did it work, it worked great!” he said. “We now cool the big cooler with less electricity than we used to use on just the small cooler, plus it seems to get the veggies down to temp faster.”
Since the device went on sale in 2006, thousands of small farmers – and florists, hunters, brewers and anyone else needing a walk-in cooler – have started using the CoolBot to keep their product fresh for a fraction of the installation and construction costs of the more traditional options.

The CoolBot uses patent pending technology that allows a home window air conditioner to keep a well-insulated room as cold as 35 degrees consistently, while at the same time using about half the electricity of a comparably sized standard compressor. The setup is simple: aluminum foil attaches a heating element to the air conditioner’s temperature sensor to trick the compressor into running longer. The CoolBot has a second sensor that idles the air conditioner when its fins are about to freeze, and restarts it when they have thawed sufficiently.

Inventor and small-scale vegetable farmer Ron Khosla created the CoolBot simply because he and his wife Kate couldn’t afford an expensive walk-in cooler compressor for the CSA they operated, Huguenot Street Farm. After lots of research and talking with friends, he thought that he might be able to use an air conditioner to accomplish much the same cooling effect with only an AC unit. Although he had to destroy more than a few air conditioners while trying to create the controller, he was able to keep his vegetables cold, using a simple device made from a light bulb and a thermometer, but had to monitor the unit to keep it from freezing up. The final product doesn’t overwork the window air conditioners. Because of the small room, tight nature of walk-in coolers, the compressors run less hard than when they are installed in someone’s living room. 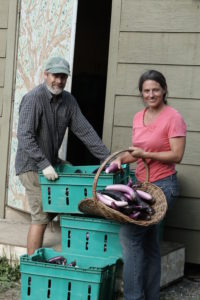 CoolBot inventor and organic farmer Ron Khosla with his partner Kate in front of their CoolBot regulated cooler. Courtesy of Ron Kholsa.

“We made it out of a desperate need for our small farm, but I never thought it would get this popular,” he said.
Once he had figured out how to keep his produce consistently cold by manually cycling the compressor, he enlisted the help of an engineering friend from his college days at Cornell University, Timothy Weber, to build a micro controller “brain” for the CoolBot that would cool an insulated room down to well below its normal range automatically. Khosla said he’s been astonished by how successful the device has been.

The National Aeronautics and Space Administration (NASA) also provided technical assistance in the design of the frost sensor through their Space Alliance Technology Outreach Program.

“This was one thing a small farmer couldn’t do well on his/her own, you were stuck paying thousands of dollars for a normal compressor, and now we’ve provided do-it-yourself folks a way to build their own coolers,” Khosla said.
What Khosla said he’s been most excited by is the CoolBot’s popularity in the developing world, where farmers from Uzbekistan to India have been building small coolers to keep their produce fresh. It’s helping to solve one of the largest agricultural problems in those places, where up to 40 percent of fresh produce spoils before it gets to market.

“Small, poor farmers across the world are so happy to find something they can afford, that uses so much less electricity. That part has been much more fun than the thousands we’ve sold in the U.S,” he said.
Khosla said that in places where there’s no nearby Home Depot, coolers have been made from papyrus, brick, and even straw bales.

“A lot of our customers hack together stuff and it usually works,” he said, laughing.
After building his own cooler and installing a CoolBot, Burkett has some advice for those thinking about their own do-it-yourself cooler.

For more information on the CoolBot, visit storeitcold.com.

Aaron Munzer is a freelance writer and farmer at Plowbreak Farm in Hector, NY.  He may be reached at aaronmunzer@gmail.com
Posted in Small Farms Quarterly