In the Northeast, usually Spring is a renaissance after a long, cold, snowy season. This past winter, however, never really arrived. On February 2, 2012, the day Punxsutawney Phil predicted 6 more weeks of winter, there was little or no snow cover in much of the Northeast. 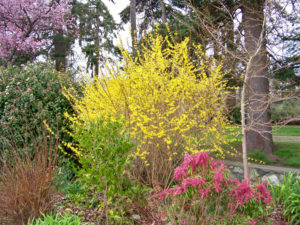 April Showers Bring May Flowers is a rhyme dating back to 1557. Courtesy of Hasshe.

Spring arrives in March followed by her sisters, April and May, close behind. March is usually an extreme transitional month. Some of the Northeast’s more significant storms occur in this month. The Super Storm of the Century plowed through much of the US on March 12-13, 1993. Regardless of the weather conditions, Daylight Savings Time starts on the 11th of March and Spring officially starts on the 20th. Spring Forward !

For the garden and flower aficionados in our part of the country, Spring is reflected by the blooming of forsythia, crocuses, daffodils and later red bud, lilac, flowering crab and dogwood trees. However, for those folks who “work the soil” and are anxious to get out-of-doors, springtime is an opportunity to shed some of those heavy and cumbersome warm clothes and get down a layer or two. Farmers and gardeners start itching to get out and prepare the fields or beds for planting. The arrival of warmer temperatures and the longer, sunnier days causes a renewed energy level that has been hibernating since late autumn.

As Spring transitions from unpredictable weather in March, snow quite often disappears by the end of April. April Showers Bring May Flowers is a rhyme dating back to 1557 when Thomas Tusser created a collection of writings called A Hundred Good Points of Husbandry. The April Husbandry was the short poem: Sweet April showers, Do spring May flowers. Even long ago, folks had to endure the rain in April in order to reap the blossoming of flowers in May and crops in summer.

Many of you are familiar with, and maybe wear, those black knee-high boots that farmers have worn for decades to keep dry. Today they come in various colors and are called different names like muck boots, chore boots and yes, work boots. Some think they were created to “muck out” stalls and stanchions. I think they were really invented to help anyone working outside to be able to just get through all of the precipitation and mud they had to deal with during the month of April every year without wet feet.

.The melting snow pack in March and early April is sometimes referred to as “poor farmer’s fertilizer” because snowflakes pick up nitrogen on their fall to earth and release it during the melting process. It would seem that gradual snow melt, aided by gentle, periodic showers and moderating temperatures would be most beneficial to growers. After all, the ground has to be somewhat drier to allow fields to be worked in preparation for planting. Late planting, late crops.

When all is said and done, most vegetables and crops are planted or sowed well after the melting snow pack in March, the showers in April, the warming temperatures of May, in June. I say Spring Forward !

Ron Mac Lean grew up in a small village in Central New York. He is now retired and lives in the Finger Lakes Region, where he looks forward each year to frequently enjoying fresh spring asparagus harvested by a local produce farmer.