It is rare to see a group of all women circled in a farm field, kicking at the dirt and talking about the weather. But across the northeast for the last two years, women have been getting together to do just that, and to gain all the benefits that come from having a group to talk farming with. A total of 180 of these women across the Northeast have come together through a program organized by Holistic Management International, an organization which advocates balancing the social, environmental and economic aspects of farming to increase quality of life. Funding was provided by a USDA/NIFA grant, which has allowed all participants to attend ten days of training free of charge.

The program launched in the Winter of 2010, when women gathered at farms and community centers in New York, New Hampshire, Vermont, Connecticut, Massachusetts, and Maine intent on learning to be better farmers. 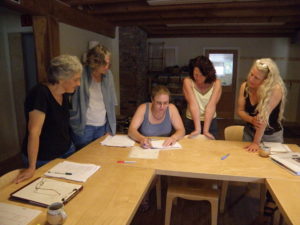 Some were fresh out of school or internships and were thinking of starting their own farm; some were looking to use their land for agriculture during retirement. Many had already begun farming, and were especially eager to learn how to do a better job of everything from marketing products to purchasing the right equipment.  Among the eager faces in each room were two women farmer mentors, ready to meet with each beginning farmer individually over the course of the season and help with specific issues during on-farm meetings.

The ten week program began not with discussions of crop or animal specific issues, but with a bigger picture question: What is your whole farm plan? Who has a say in decisions on the farm, and what do those people want their lives to be like both now and in the future? How does the farm work to enhance that goal? All other decisions would be made with this whole farm plan in mind, from choosing enterprises to adjusting management practices.

After articulating a goal for the farm and its decision makers, weeks were spent hashing out the details. First, participants tackled finances. This was a tough couple of weeks for many people, particularly those who had not previously spent time determining if their enterprises or potential enterprises were profitable. Quite a few were not. Fortunately, everyone had time to carefully look at their expenses and their income. Groups helped each other brainstorm ways to cut maintenance costs while protecting wealth generating expenses and later helped each other develop better marketing plans to increase revenue. If an enterprise simply couldn’t be profitable, groups brainstormed other enterprises that could be and still fit into the farmer’s whole farm plan. 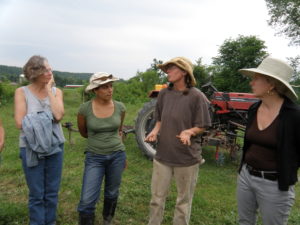 In looking back on the class recently, Mary Beth Welsh, a farmer from the 2011 class said of the financial planning sessions, “[this] portion of the class made it very clear that to be successful, understanding the financial issues and catching errors early is essential to keep moving forward …”  When asked immediately after the sessions about attitude change, 95% of participants said they had gained confidence about writing a business plan. Five months after the course was finished, 43% of survey respondents indicated that they had actually developed a financial plan. One farmer survey respondent wrote the following about financial planning’s effect five months later: “The budget planning that we did at the beginning of the season set me and my husband on a solid path for our first season of farming: we exceeded our planned profit, in part thanks to the decision making and budgeting tools I learned from HMI.”

As the weather warmed,  sessions moved outdoors, and focused more on “nuts and bolts” aspects of farming including soil health, biological monitoring and management of animals to improve the land and increase productivity/profitability, and infrastructure planning. Many of these sessions took place on participants’ farms, where the group was able to first assess the situation and then brainstorm improvements. Lunchtimes during these summer sessions were filled with talk of animal breeds, cultivation equipment, and countless tips and tricks. Tours of each farm were a highpoint for many participants, many of whom had not been able to spend so much time on another person’s farm.  The diversity of farms was seen as a positive, even if the enterprises were not exactly in line with what each participant was doing.  Tricia Park, 2010 class participant, noted,” It was interesting to see the age differences and different types of farms- but we all had a common goal:  Doing what we love and making it successful.”

Another highpoint for some participants came during biological monitoring sessions, when lawn darts were used to take a detailed inventory of what was happening in pastures rather than making “windshield assessments.” Participants quickly learned how to identify signs of biological activity, healthy nutrient and water cycling, and efficient energy flow, all of which contribute to the productivity of the land. They learned to be thorough, and to look for positive change from year to year in a given field. Many participants have indicated in surveys that their productivity and animal health has improved after learning to better manage pastures. 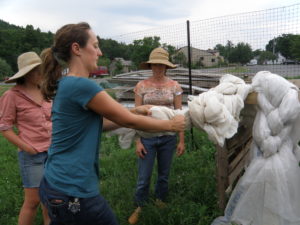 A Beginning Woman Farmer who worked at Hawthorne Valley showing other BWF’s how to secure floating row cover. Photo by Crystal Stewart.

The benefits of the last two years’ programs will continue on based on the relationships formed by participants in the program. A listserve has been created for participants to keep in touch and ask questions, and some states have decided to keep meeting, often combining participants from years one and two. One of my favorite thoughts from my conversation with Mary Beth was on this very topic: “Being part of this group has opened up an entire network which also includes women from previous and future classes – women I haven’t even met yet.” This is a very true statement—the grant has one more year of funding, so another twenty women will be accepted from the pool of applicants in each state. Anyone with less than ten years of farming is welcome to apply.

Crystal Stewart is the Regional Agriculture Specialist with the Capital District Vegetable and Small Fruit program. She taught financial planning, animal impact, soils and marketing for this program. She can be reached at (518) 775-0018 or cls263@cornell.edu
Posted in Small Farms Quarterly