I’m an architect working with a team of scientists and engineers to develop a type of Controlled Environment Agriculture that we are calling ZEA2™.  The name might look like an algebra formula to you, but what it stands for could revolutionize the sustainable farming movement. “Zero Energy Agriculture Squared” refers to a special greenhouse now in development that is designed to be far more deployable, productive, and sustainable than anything currently on the market.

ZEA2™ offers the benefits of Controlled Environment Agriculture, but without the fossil fuel inputs. Additional advantages are:
• It can be applied to readily available plasticulture greenhouses
• It can be used for year-round secession planting and continuous production
• It can reduce agricultural land food-print
• It can reduce irrigation and fertilizer inputs, minimizing nutrient leaching and run-off
• It can eliminate weather-related crop losses
• It can provide a viable economic model for micro-farming
• It can increase national and regional food security.

If you’ve ever seen a greenhouse, you’re already familiar with Controlled Environment Agriculture a.k.a., CEA.  CEA is an idea that dates back to Roman times: an artificially maintained indoor climate for growing crops that would not otherwise be possible to grow.  Today, CEA generally comprises a greenhouse using heating, cooling, humidity control, irrigation, and artificial lighting, and using a great deal of non-renewable, budget-busting fossil fuels. What makes ZEA2™ different is that it will offer the benefits of CEA, but will reduce energy consumption so much that renewable energy and other onsite resources such as rainwater can be economically employed.  It comprises a high tech, sustainablefarming system that can support organic and low-input agriculture virtually anywhere on the planet. 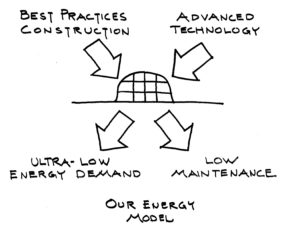 Let’s take a closer look at the concept: The “Zero Energy” of the title is borrowed from advanced architecture and engineering in which enough energy is produced annually from onsite alternative energy sources to power a building and its systems.  Thus a solar PV array may produce excess electricity in the summer, and very little in the winter, but balances out as a net sum over a year’s time. The “Agriculture” part refers to a growing system that is scalable from micro-farming to large scale commercial growing.  Its initial iteration, however, targets small growers serving community-scale markets by emphasizing small-scale systems for small plots. “Squared” refers metaphorically to the geometric potential of high density/high value cropping, and designs that can be employed to grow cash crops in places that might not otherwise be feasible. ZEA2™ can be sited on poor or marginal lands in struggling rural communities, small suburban plots, exurban corporate campuses, and urban settings including rooftops.

Where the Concept Began
While controlled environment growing has been in use for thousands of years, it wasn’t until 2003 that a Dutch company developed a design known as “geslotan kas” or closed greenhouse. By developing a greenhouse that effectively seals out the exterior environment and completely controls indoor climate, closed greenhouses marked the beginning of energy-efficiency principles being applied to CEA.  The Netherlands and the EU in general have a very different farming industry from North America’s, however.  Shipping distances to dense populations are shorter; climates are milder; and investments in long term energy efficiency for large production facilities are mandated by and directly supported by.  So something different is required in the United States.
ZEA2™ is rooted in the idea that hyper-energy efficient CEA can work in the extreme climates and in the less-intensively government-subsidized, more free-market-principled systems that typify North America.  Initially supported by a New York State Energy Research and Development Authority (NYSERDA) research grant, a team including my architecture firm, scientists, and engineers is now working cooperatively to build the first series of ZEA2™ greenhouses.  The goal is to make them available to a range of community-based farms, including traditional family-run farms and all sorts of new farms.

ZEA2™ systems are custom designed to with built-in sensitivity to the opportunities of location and climate. Courtesy of Michael McDonough.

ZEA2™ systems are custom designed to work essentially the same way that crops grow; that is, with built-in sensitivity to the opportunities of location and climate.  Every square millimeter of the system has been designed for maximum efficiency.  Greenhouse snow and wind loads exceed code requirements to minimize frame flexure and leaks. Plastic coverings are chosen for low initial cost, structural integrity, durability, insulative properties, and solar heat gain control. Every joint is sealed, every opening is gasketed, and the concrete slab-based heating and cooling system is so thermally isolated and moisture resistant that it could just about float in the Bering Strait and maintain its temperature.
This highly-focused and integrated system is inevitably rooted in energy demand

management,   so every ZEA2™ sold will have its own climate-adjusted design. ZEA2™ uses off the shelf solar hot water (solar thermal) systems for heating, and is co-developing LED lighting that offsets energy consumption by up to 80% over conventional CEA high pressure sodium and metal halide lamps. The LEDs also reduce installation costs and light-induced heat, and eliminate the highly-toxic rare earth metals in conventional bulbs.

Taken altogether then, ZEA2™ design innovations can meet CEA energy needs using onsite solar energy, offsite Certified Green Energy wind energy, and other alternative energy sources while generally promoting clean technology in agriculture.  The growing media are engineered to be certified organic, and pest control uses beneficial organism and biological controls as part of an Integrated Pest Management (IPM) program.  In many instances the system can satisfy all reduced irrigation inputs using captured roof-rainwater runoff.  ZEA2™ systems work passively, or without equipment, whenever possible.  Where they do use equipment, it is minimally configured, and controlled a continuous commissioning software program that simultaneously data logs, reports, and synergistically operates ZEA2™ 24 hours a day.  The technology research phase is currently being deployed in Upstate New York, with additional commercial research locations in various climates now in development.  After a proof-of-concept stage, the system will be incorporated into formal marketing and business plans, and will seek private investment to achieve wide deployment. 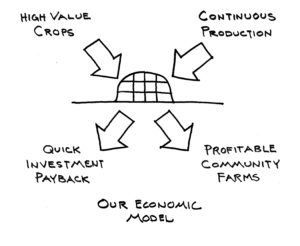 In these ways the ZEA2™  team aspires to re-imagine agriculture, making it possible for all sorts of farms to employ intensive growing while reducing fossil fuels and associated carbon footprints while and producing nutrient-rich food closer to where it is marketed and consumed.  And where it makes sense to the health of established farming communities, sustainable and best practices large scale farming is welcome too.

Michael McDonough, AIA, NCARB designed the ZEA2™ system and heads its technical development team.  He owns Michael McDonough Architect PC, an architecture and design firm in New York, NY.  He can be reached via email at mail@michaelmcdonough.com.
Posted in Small Farms Quarterly