By Fay Benson
How to feed the approaching world population of 7 Billion people has been a compelling question for me as I talk to farmers and educators in my work with Cornell Extension. 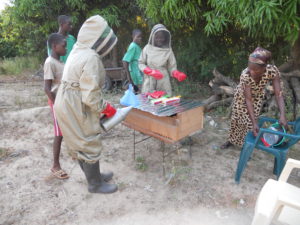 There are many graphs and tables stating where the population is growing and rate that it is growing. Until recently, I assumed the general solution was that the world needs to produce more food.  This solution was supported by presentations on how new genetics and technology were increasing food production per acre. During a return visit to the country of Ghana this past December, the question became less rhetorical and more urgent and personal for me. I had spent 2 years in Ghana from 1974 through 1976 in the Peace Corps.  The changes that had occurred in the interim 34 years that I observed during this visit helped me put a face to the challenges of a growing population and speculate different answers to the question of feeding the world. It’s obvious we need to produce more food, but the more pertinent question is: who is going to increase their production?
My two year Peace Corps experience was definitely a character building period in my life. I worked as a Manager for the construction and machinery repairs on a 10,000 acre cattle cooperative. I learned more about my culture from having the opportunity to compare my known culture to a different one. I also learned that it doesn’t take material things to make people happy, and the people of Ghana were the most welcoming and generous people I had ever met. When I left, I didn’t know if I would ever return.
Today’s Ghana
My plane touched down in Accra, the capitol of Ghana, in the middle of the night.  The first difference I noticed was right from the plane.  I could see the expanse of lighted areas around the capitol stretched out far beyond what I remembered.  The car trip to my accommodations took me down rough roads or what I learned later were planned roads which hadn’t yet been built.  The capitol was growing so fast, houses were being built before the roads. The traffic was bumper to bumper with little traffic control at intersections. What seemed like chaos to me didn’t surprise me since I remembered the Ghanaians to be very resourceful and determined.
During my travels across Ghana, the first startling discovery was that the present day population of Ghana was 28 million people; the population when I lived there was around 9 million people, an increase of 300%.  It appeared that this growth happened totally around the urban areas. In the rural areas the scenes and the population seemed similar to what I remembered in the 1970’s. As a farmer, I took this to mean that there were many more people to feed, but no comparable growth in farmers to work the land to produce the food. The food was the other big change. When I lived in Ghana, the staples in the south were tuberous root crops such as Yams, Cassava, and sometimes Plantain. They were boiled and pounded into “FuFu” a dough-like concoction that was swallowed, not chewed, with a spicy tomato based soup. Meat was sparse and of questionable source. Today, many Ghanaians consider FuFu their traditional dish, but in the street “Chop Bars”, chicken and fish are now available to accompany these foods, in addition to rice and pasta. Rice does grow in Ghana, but not the wheat for the pasta. Calculating the rough math brings Ghana’s future food challenges into perspective. Take a 300% increase in population growth and multiply by an improved diet.  Consider that Ghana is just a small sample of the quickly developing nations of the world. And consider that this equation just looks at food production and doesn’t take into account the increased petroleum usage that is happening in much the same manner. 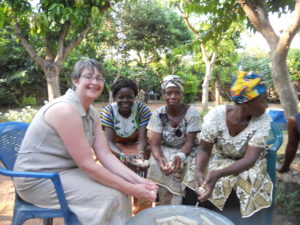 Despite the challenges that lay ahead for Ghana, I felt their lives had improved since my last visit. The Ghanain Government is very flexible and works well with diverse organizations to improve the lives of its people. Education through primary and secondary schools has always been strong in Ghana, a remnant of the British, and access to health care has improved since the 1970’s. This past year, Ghana introduced a National Health Card which allows the holder access to Doctor visits for 14 Cedies a year (US$10). Connection to the electrical grid had expanded during the time period. The Akosombo Dam was built in the 1960’s. Its generators are able to supply electricity to all of Ghana and also to Ivory Cost and Togo. The reach of the transmission lines had continued to grow in the North and now many areas have accessible electricity. Quirkiest of all the changes I saw was the use of cell phones. More than half the people we met had a cell phone and some even had two. During my Peace Corps time it was common to listen to the Talking Drums at night with one village communicating with another, so to now see the farmers in the bush using cell phones was a bit of a shock. It was through the use of cell phones that I was able to get in touch with the Ghanaian who had cooked and shopped for me during my two years there. It was so good to see Isaac, who is now a grandfather.  Talking with him and also visiting Juapong, the former village I lived in was an emotional connection to my past.
The Role of Small Farms
It was the rapidly expanding requirement for food that had the biggest impact on me. When I ponder the feeding the world question now, I have a more focused view on the situation across the world. I no longer see the push at technology and production increase here in the US as the only way to address growing demand. It would make more sense for countries to produce their own foods. From my own experience at the very large cattle ranch, which failed shortly after Peace Corps involvements ended, I can now see that smaller family owned farms are much more secure. I feel family operated farms that depend on family labor and community support for added labor and markets would be a good fit for Ghana. This model would work well in Ghana because their culture is much more focused on family and regional/tribal connections than in the US or Europe.
My opinion is the Ghanaian Farmers would benefit from agricultural education on soil, plant, and livestock production techniques designed to fit Ghana’s culture, environment, and needs. The education needs to be on the order of organic production techniques due to the lack of capital for Ag inputs, and the unreliability of getting these inputs at the time they are needed. Preventing diseases in soil and animals, as well as providing soil nutrients through management and labor would fit the culture and their resources.
I am becoming aware of organizations such as the Cornell International Institute for Food, Agriculture, and Development (CIIFAD), some projects of USAID, and others which work to help in-country farmers to build their capacity to feed their countries.
Fay Benson is a small dairy educator with Cornell Cooperative Extension of Cortland County.  He may be reached at 607-753-5077 or afb3@cornell.edu.