Home » Posts » Fabrics of Our Livelihoods

Fabrics of Our Livelihoods 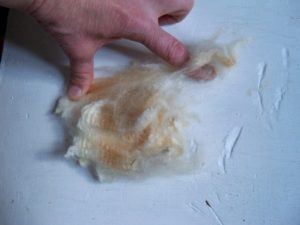 This swatch of raw fleece from a Corriedale sheep has a lot of “crimp,” making the fibers relatively easy to spin. Courtesy of Jill Swenson.

When the United States’ agrarian-based economy evolved into an urban-industrial one in the mid-19th century, the new economic structures greatly altered the way work was managed and performed. Most notably, the home ceased to be the center of production for every bit of food, furniture and fabric used by the family.

Fast forward to the second half of the 20th century, when the craft movement countered the sameness of industrial goods. Lots of us learned to spin, weave and knit wool into clothing and useful things for the household. Some wanted to have the experience to prove they could do it if they had to. But for others of us, spinning remains a lifelong pleasure.

Spinning is basic and easy.  It’s also a lot of work, which is why it was among the first tasks to become industrialized.  In recent years, spinning wheels themselves have become more efficient and easier to use.

Suppose an eight-pound sheep’s fleece is put into the hands of a skilled wool-worker. She has to skirt the tags; discarding short pieces and damaged wool from the fleece, along with any vegetal matter that may easily be removed. Did the sheep walk through burdocks and embed a few spiky burrs deep in its fleece? Did it rub its neck on the feeding box, damaging the fleece there? Those parts are discarded as well. 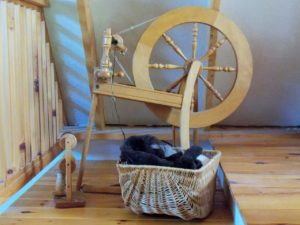 A traditional Ashford spinning wheel uses a foot pedal and treadle to spin wool. To ply yarn, the spinner reverses the direction of the wheel and gives the fibers an interlocking twist. Courtesy of Jill Swenson.

The wool must then be washed by hand in tubs or buckets, in several changes of hot water with decreasing amounts of detergent, followed by several rinses. Once the wool is dry, its locks must be loosened, or “picked” before being fluffed and straightened by carding, a process accomplished by hand or machine.  The spinner uses a drop spindle or spinning wheel to apply tension and centrifugal motion to draw out the fibers into a yarn, which in turn must be spun back in the opposite direction with other thin yarns to create a strong and balanced multi-ply yarn. This yarn, in turn, is skeined, re-washed, sometimes dyed, and then rolled into balls of yarn for knitting or weaving. The original eight-pound fleece has become, at best, 4 ½ pounds of yarn.

It’s not fabric until it’s knitted, crocheted, or woven into fabric. Once a loom has been threaded and set-up, weaving is the quickest route to cloth.  Because it requires concentrated time and attention to accomplish this, more portable handcrafts like knitting and crochet were also used by busy people who needed to multi-task. Which brings us full circle to why in recent years, busy people have again begun to knit; and the experience of knitting has brought many of them to a renewed interest in spinning.
The amount of work involved in starting from scratch with a fleece – and the knowledge that as a spinner you’ll be living with that fleece for a while – adds importance to the choice of wool. As a shop owner specializing in natural fibers, I’m as interested in the farm the wool comes from as the type of wool. Before purchasing a fleece, I’ll pick a few random locks and hold them between two hands; first relaxed, to judge the curl or crimp of the wool. Then I’ll snap it; pulling my hands apart rapidly.  If the wool breaks, the sheep has been stressed by illness, injury or parasites – and I won’t want it. Spinners also do something others may consider odd. We always smell the wool. Sheep smells are good; off smells are not. 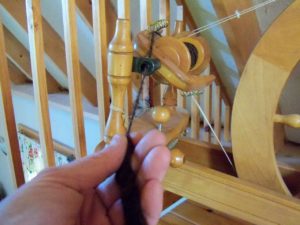 With the left hand, a spinner pinches the raw fiber to put the twist in as the wheel pulls the thread in towards the wheel along the hook guides on the spindle where the new spun fiber is wound. Courtesy of Jill Swenson.

Carole and Mark Harth, owners of Bear Farm on the hills above Seneca Lake in Central New York, specialize in Corriedale sheep. This dual purpose sheep produces good meat as well as medium-staple wool. They’ve got merino in their heritage. Corriedale wool is soft; easy to handle for beginners and more advanced spinners.  For the Harths, they meet another significant criterion.  Corriedale ewes are good mothers.

While their flock is relatively large – up to 325 animals from lambing through midsummer – the Harths are hands-on farmers; handling their animals with affection, attention and care. The result from a spinner’s point of view is fleece with luster and strength. This is also important to the Harths. Part of their clip is sent each year to Bartlett Yarns in Maine where it is cleaned, carded and spun into yarn. The size of their flock enables them to receive their own fleece back as yarn. This value-added product is sold to yarn shops, fiber studios, local artisan gift shops and to area visitors who want to take home something that will last longer than a bottle of wine. From a handspinner’s point of view, Bear Farms’ wool is ideal.

With prices falling between the low wool-pool price (generally less than $1 per pound) and the custom fleece prices of those who raise sheep primarily for fiber (often upwards of $8 per pound for raw, skirted fleece), it’s straightforward  to skirt, wash, dye and card. For those who want to sell unprocessed fleece directly to handspinners,  it may be worthwhile to investigate heritage sheep like Hog Island, Shetland, Romney, Karakul, Tunis or Jacob’s Sheep.  Many spinners like to try wool from different, less-common breeds, for entertainment, self-education and bragging rights.

In the Finger Lakes area there are also shepherds who have done well raising more common sheep with attention paid to the quality of their fleece. Some sheep farmers do it so well they keep waiting lists for the clip from particular animals. Even so, there is much debate among handspinners on how to establish the value of a fleece. The general consensus, decided on-line several times every year, is that raising fiber animals for their fleece is more a life-style choice than a savvy financial decision. 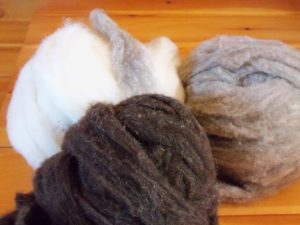 Beautiful rovings from Jacob sheep have already been washed, carded, and prepared for spinning. Courtesy of Jill Swenson.

I’ve also purchased fleece from much smaller scale shepherds, like an elderly farmer whose dozen Merino sheep are descendants from his grandfather’s 19th century flock. Merino is a fine, soft wool with a high percentage of lanolin. It has a shorter staple and a lot of crimp. Merino wool is greatly valued as a yarn but it poses challenges for hand spinners; particularly before it’s washed and carded.  High lanolin levels and the dense closely-packed fibers make this a fleece best processed by a mill with equipment calibrated for finer fleece.

Many communities have fiber mills where wool is washed, picked and carded. Some of these can take the fiber all the way to yarn; some cater mostly to handspinners and quilters who want wool comforter batts. Some mills specialize in exotic fibers, like alpaca.
In the 21st century, handspinners have higher expectations than our foremothers. Our spinning is art as much as craft. We want to produce yarn that’s unique as well as beautiful and useful. Good tools, good fiber preparation and most important, good animals – are the ingredients for warm woolies of timeless beauty.

1) Sheep and wool production: Cornell Cooperative Extension.
2) Spinners’ guilds: find a fiber group in your area via word of mouth, yarn shops, and the internet to make contact with a potential market for “raw” fleece and discover the “flavor du jour” of the fleece market.
3) Bear Farms, Carole and Mark Harth, Burdett, NY http://www.bearfarmyarns.com
4) Processing your fleece – there may be a local fiber mill in your area; or contact Zeilingers Woolen Mills in Frankenmuth, MI (www.zwool.com or (989) 652-2920)