Get Started With Spin Farming

Calling all aspiring farmers. If you have a calling to farm but you have no land, no money and no farming experience. No problem. Be a SPIN farmer!

My name is Linda Borghi, and I am a SPIN farmer in Walker Valley New York. 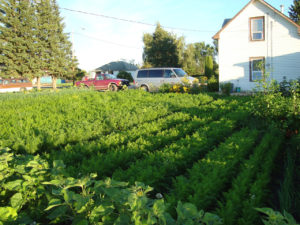 The SPIN-Farming system makes it possible to gross $50,000 or more from a half acre, which is about the size of many suburban yards. Like this one. Courtesy of Wally Satzewich.

SPIN stands for Small Plot INtensive. It’s an organic-based production system that allows you to generate $50,000 + in gross sales from a ½ an acre of land, which is about 20,000 square feet. SPIN-Farming was developed by a Canadian farmer named Wally Satzewich, and here is his story.

Wally did not come from a farm family. Thirty years ago he began growing in his backyard in Saskatoon, Saskatchewan, a city of about 220,000. He began selling at the Saskatoon Farmers Market, and that sealed his fate. He realized he was a farmer, and like most farmers he thought to become successful, he had to get bigger. So he acquired 20 acres outside of Saskatoon, along the Saskatoon River, and invested in an expensive irrigation system and brought in outside work crews. But he continued to live in Saskatoon and grow in his small yard there.

Over time he realized he was growing high value crops, like carrots, spinach and salad mix in his small backyard, and he was growing low value crops, like potatoes and onions, on his larger acreage in the country. This distinction between a high value and low value crop made him realize the other advantages to city-based sub-acre farming. He could grow high value crops in the city because he was not losing them to pests, like deer and large scale insect infestations. His irrigation system in the city was the water faucet, he did not have to depend on fluctuating river levels or worry about water quality. His work crew in the city was he and his wife. He did not have to depend on outside labor. 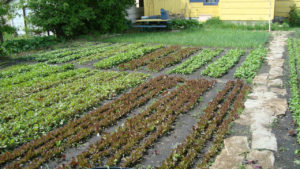 How about an urban backyard SPIN farm? This was one of Wally Satzewich’s first plots, at his uncle’s house. Here is where he grows one of his high value crops – salad mix. Photo by Wally Satzewich

When he looked at the financials, he saw that even though the land base and overhead of a sub-acre farming operation is a fraction of that of a large-scale farm, their bottom lines are similar. So a sub-acre farmer can earn as much, or more, income as a large scale farmer, but with a lot less stress and overhead, and with a lot more control over their operation, and with a lot more certainty of success from year to year.

So Wally sold off all his acreage in the country, Futility Farm as he called it, and he became an urban farmer. Now, the only land he owns in the city is his own small backyard, and he rents or barters other backyards to make up his land base. He has been supporting himself farming this way for over 15 years. He has documented his system for maximizing income from sub-acre land bases, and he calls it SPIN-Farming.

SPIN-Farming is now being practiced by a growing corps of first generation famers in the U.S. and Canada. Some of its concepts include a multi locational farm land base,  1-2-3 land allocation, high road/low road harvesting, high-value crops, structured work flow and work rate. What the SPIN system does is knock down the barriers that individuals face when attempting to enter the field of farming as a profession. The three largest barriers are: owning large tracks of land, major capital investment to farm those large tracks and land, and the education necessary to create a financially successful farming business. SPIN-Farming addresses all three.

In addressing the first barrier, which is land, did you know that there are 46.5 million acres of lawn in the United States today, and it takes 40% of the drinking water on the East Coast and  60% on the West Coast to water those lawns? Some of that very same land is prime farmland, and where many SPIN farmers are now getting their start.  Front yards, backyards, neighborhood lots, roof tops are all good land base options for SPIN’s sub-acre scale food production model. 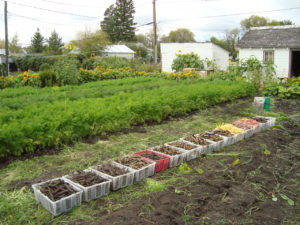 Here is another high value SPIN crop – rainbow carrots. In the SPIN system, once beds are harvested, they are immediately planted to a different crop. This is called relay cropping, with the aim being to plant at least different three crops, one right after the other, in the same bed throughout the season. Courtesy of Wally Satzewich.

The second barrier to entering the farming profession is capital. The investment in a SPIN-Farming operation is a fraction of that of the conventional model. Some tractors cost tens of thousands of dollars With SPIN-Farming, an investment of as little as $10,000 can get you successfully farming in no time.

The third major barrier is education. I come from an Italian family of fine art dealers. They both start with the letter “f” – farmer and fine arts dealer – but they are worlds apart. I picked up a lot of my farming know-how through years of trial and error, and that is what SPIN-Farming eliminates. The system is explained in a series of guides that emphasize the business aspects and provides a financial and management framework for having the business drive the agriculture, rather than the other way around.  Many a SPIN Farmer like myself has created a successful sub-acre farm business through the use of these guides.

Here you can find more information on SPIN Farming.

Linda Borghi is a Biodynamic SPIN ® Farmer and Educator at Abundant Life Farm, Walker Valley, New York. She can be contacted via email @ LBorghi@AbundantLifeFarm.com or by calling 866-993-8932 x 13.
Posted in Small Farms Quarterly