Home » Posts » Experimenting with Caterpillars: Another Option for Season Extension

Experimenting with Caterpillars: Another Option for Season Extension

Last fall CCE Tioga staff and local farmers put up two “caterpillar” tunnels on vegetable farms in the Southern Tier of NY, one in Tioga County and one in Schuyler County.  We decided to trial these “caterpillars” at a couple of local farms because, while more widely used in Eastern NY, their use and construction isn’t very familiar to Southern Tier farmers.

Caterpillar tunnels are, at their most basic, high tunnels on the cheap.  They have three endearing qualities over the regular 30 x 96 high tunnel.  First off, they’re easily moveable, which means they can be built quickly over an established crop (field prep and planting can be done with a tractor) and crop rotation is easier.  If you want to grow tomatoes in your caterpillar tunnel every year, have at it–erect it in a different spot every season.  Secondly, they’re wonderfully cheap, making them an easy way to experiment with growing crops under cover and accessible to even beginning farmers without a lot of capital.  Whereas it’s common for more standard 30 x 96 ft high tunnels to cost $7-8,000 ($2.00-2.50 per square foot), caterpillars are usually built for under $1/square foot.  And, as mentioned above, you can’t beat the construction ease.  Third, you don’t have to level the ground for these tunnels.  They can go up a slope or down and up a dip, following the contour of the land.  A word of caution here—Ted Blomgren, an experienced tunnel grower who uses both caterpillars and fixed tunnels, comments that while caterpillars are cheaper, you kind-of get what you pay for.  The caterpillars don’t have a high roof to help moderate temperature swings, and you don’t have any automation when it comes to venting.  Getting in and out of the tunnel when there’s snow is also no easy task.

We started in the fall of 2009, with a caterpillar made of pvc pipe, greenhouse plastic, rebar and baling twine.  We used 20 ft long 1” schedule 40 pvc pipe, except for the ends which were 1.5” in diameter. First we measured out a 10 ft by 100 ft rectangle and put twine along the edges, adjusting it until it was square.  Then we drove our 24” pieces of #5 rebar (5/8” in diameter) every 4 feet along either side, leaving 6” above ground—our bows were set 4 ft on center since we wanted this thing to carry a snow load.  Between each bow anchor, we drove a 48” piece of #3 (3/8 inch) rebar that was bent in half, like a 24” giant “ground staple.”  These were pounded in nearly flush with the ground and slightly inside the edge of the hoops, with the tip angled inward so that when pulled on, they don’t come out.  Rocky soils required more pounding, but were not insurmountable.  We bent the pvc pipe in an arc between opposite bow anchors, and voila, we had our hoops.
After all the rebar pounding, it was really gratifying to see how fast the ribs of the tunnel went up—it’s by far my favorite part in the construction process.  We tied 26 ft lengths of baling twine (heaviest we could find, UV resistant) to each of the ground staples on one side of the hoops.  At the ends of the caterpillar we drove a hefty stake angled outward into the ground. We also tied a string (or rope) “purlin” down the length of the tunnel, on the tops of the hoops, and stretched tight to the two ground stakes at the ends.  This was the tedious part—that rope should be tight between all the hoops and to the stakes at the ground on either end, and it can take some finicky adjustments to make this happen while the bows are all reasonably plumb.  Then we rolled out our plastic and pulled it over the tunnel.  Nice when the farmers you’re working with are tall, it makes this part easy!  Note on this:  if you want a 100 foot tunnel, start with a piece of plastic at least 130” long, if not 150”—you’ll need 12-15 feet extra on either end to pull and bunch to the ground. 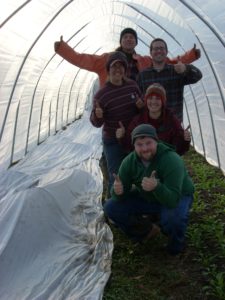 Matthew and Liz from Muddy Fingers Farm with Matt LeRoux, Molly Shaw, and Eric Yetter, extension employees who helped bend the pipes and build the tunnel. This tunnel‘s material costs were $1270, or $1.27/square foot. Courteys of Matt LaRoux.

Now came the tying down steps: these are very important.  We bunched the narrow end of the plastic together and stretched it to the ground.  Then we put a soft-ball sized smooth rock in the middle of the bunch (like a fist punching out through a t-shirt), wrapped twine around the neck of the plastic-wrapped rock so it didn’t fall out of its pocket, and tied it tight to the stake at ground level.  We did the same thing on the opposite end.  Make sure at the plastic pulling stage, your caterpillar skin is taught along the whole length.  To hold the plastic tight between bows, we threw each twine piece tied to a ground staples over the tunnel between its two neighboring hoops, and tied it snuggly to the ground staple on the opposite side.  Clothespins on the ends of the twine helped add weight for easier throwing.  Don’t criss-cross the twine over the hoop, go right between the bows.  Your finished tunnel should be tight and look segmented (hence the “caterpillar” name) where the twine stretches the plastic down over each hoop. You might need to tighten the twine in a few days.  You vent the sides by pushing up the plastic between the bows—some time it stays on its own, sometimes you need a notched branch to make it stay. This tunnel cost $550 in materials ($0.55/square foot for a 10 x 100 foot tunnel).  It probably took three of us an inefficient 4 hours to construct—this was our first one, and I’d expect that in non-rocky ground two people could do it in 2-3 hours.  Look at figure 1 to see the newly constructed caterpillar.
Our other caterpillar tunnel we made with metal hoops.  We used ¾” galvanized water pipes, 20” long, and we bent them ourselves.  That was an adventure.  A metal electrical conduit bender doesn’t work, it breaks.  Farmers in eastern NY said to use a pipe bender, but we didn’t have the right one.  In our case, we wanted to make a little peak to the bows, so they were more gothic shaped than Quonset.  We made ourselves a jig, put the bend in the peak first, then bent the rest of the hoop around another rounded wooden jig.  Definitely more work (and expense) than pvc pipe, but this farm wanted something more durable and long lasting than plastic.  The rest of the construction was the same, except this farm wanted a door in the end (instead of ducking in the side) so we tried the structural compromise of not tensioning the plastic to a stake at one end, but rather attaching it with wiggle wire to the metal bow, and resisting the tugging from the other end by using some pipes set at an angle (shoulder height at end hoop, touching the ground a couple hoops back into the tunnel).  This seemed to work reasonably well.  This tunnel cost $1270 in materials ($1.27/square foot for a 10×100 ft tunnel).

Both tunnels withstood snow well. The pvc tunnel did bend down under the snow load, but it sprang back up when the snow was pushed off. I wish we had used 1.5” pvc pipe that was stiffer for the hoops—that extra half inch gives an amazing amount of rigidity. For summer use, when snow load isn’t an issue, the anchors and bows can be spaced twice as far apart so more area can be under plastic.  Spacing the bows at 8 feet on center gives you two tunnels for only the extra plastic cost, which translates to about $0.70/square foot in the summer configuration.
At the end of the trial, I think caterpillar tunnels have a useful place on a vegetable farm.  They’re the right price for beginning farmers and for those just experimenting with growing under cover, and they’re mobile.  We’re starting to notice more soil problems in older tunnels, so this mobility factor may be even more important as we learn more about long-term tunnel growing.  If you want to try one and are looking for more details or pictures, contact Molly Shaw, meh39@cornell.edu, 607-687-4020 or Liz and Matthew at Muddyfingers Farm at maglenn_1999@yahoo.com.

Useful note about buying supplies: plumbing stores have much better prices than home stores like Lowes, Home Depot, etc. The store managers were a little incredulous about the orders—they’re not commonly used sizes/lengths by plumbers, apparently—but in the end they were good to work with. We even got the metal pipe delivered, since my little wooden 2×4 jig I used to hold floppy pvc pipe to my Subaru roof rack wasn’t going to cut it for the heavier galvanized pipe.