Organic Valley is committed to utilizing responsible and renewable energy. They have worked within their business to implement solar and wind projects to provide clean energy to their headquarters. But they haven’t stopped at simply replacing electricity with a more responsible source of power; they are also working within the cooperative to further the use of biofuels – both at the business level and on their farms.

Beginning in 2002,OrganicValleystarted to use biodiesel in their fleet trucks as an alternative to petroleum diesel. In order to realize their goal of fueling with biodiesel, they needed to create relationships with local fueling stations. The success with biodiesel use at the business level coupled with the rising cost of both fuel and organic feed led the cooperative to research how biodiesel could be produced at the farm level.

The On-Farm Biofuels program began about two years ago and has garnered increasing interest from co-op members who wish to become more self-sufficient through using renewable fuels to power their operations. But it is not only independence that drives these farmers. Also playing a major role are the volatile oil prices that have left many farmers searching for petroleum alternatives, especially when we saw $5 per gallon diesel in 2008. But using biodiesel is easy; finding a fuel that is not connected to the volatile commodity market is more difficult. So in true farmer fashion, creating fuel on the farm has been the answer. 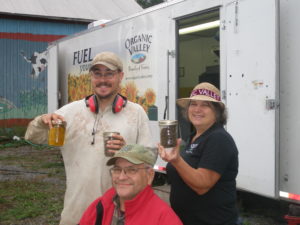 Chuck and Andra Benson and son Thane display samples of crushed canola from their organic dairy in Lansing, NY. Courtesy of Jake Wedeberg.

Some farmers will render waste vegetable oil when available, but many are choosing to simply grow their own fuel by planting oilseed crops like sunflowers, camelina or canola.  Growing oilseed crops uses this year’s energy from the sun to produce a crop that will provide fuel and feed for a farm. The organic meal that is left over after the oil is an extracted is an excellent protein source to supplementOrganicValley’s pasture based dairy farms.

As more farmers started to grow oilseed crops to fuel their farms, it became difficult to source facilities that could crush 10 acres of sunflowers and keep the resulting USDA Certified Organic protein meal separate from conventional meal. From this need, the mobile biofuel processing trailer concept blossomed. The trailer provides farmers with all the equipment necessary to convert seed into a usable fuel and feed. Inside the 28-foot-long insulated racecar trailer is an oilseed press, filter press, settling bins, oilseed and protein meal storage bins and a biodiesel processor. With this one trailer, farmers can do everything they need to press their oilseed crops, and since the trailer is mobile, it can move from farm to farm throughout the country demonstrating the technology and teaching farmers about the possibility of fuel independence.

The trailer connects to the electric service panel at the farm and the oilseed is loaded through the roof into a bin that holds 2000 pounds of seed – one day’s worth of pressing. Once loaded, the press is turned on and a series of augers transfers the seed and meal to and from the press. The seed handling is fitted with a proximity switch that allows for 24-hour unattended operation. After the oil is crushed, it goes through a series of tanks where the sediment settles out, and then the oil is pumped through a filter press before finally being pumped into the biodiesel processor. It takes 3 days to go from seed to finished biodiesel. 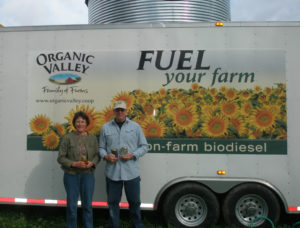 Once the oil is extracted, farmers can choose to retrofit their equipment to run on straight vegetable oil, or they can further process that oil into biodiesel. Biodiesel can be used in any diesel engine without engine conversion. In order to process straight vegetable oil into biodiesel, the oil is heated to 130 degrees and then methanol and potassium hydroxide are added. This process thins the oil to make it usable in any diesel engine.

Alternatively, instead of converting the oil into biodiesel, most diesel engines can be converted to operate on the straight oil. These after-market kits are retro-fitted to diesel engines and essentially preheat the oil to ease fuel delivery to the engine and assure complete combustion. This avoids using the extra energy and the extra per gallon cost associated with biodiesel conversion.

Farmers grow a variety of different oilseeds depending on the type of protein meal they want to feed their livestock and what equipment they already have on the farm for growing and harvesting crops. The cold extraction screw press itself is capable of crushing over 100 different oilseed varieties, which means if the seed contains oil and fits in the press, fuel can be made.

The mobile processing trailer first hit the road in 2009 and went to six farms throughout Wisconsin.  This year there are 18 farmers who have requested the use of the trailer. The biofuels trailer has been used as a demonstration tool to get biodiesel into farmer’s hands, turning the seemingly impossible idea of producing fuel on the farm into a reality for many farmers who want to be more self-sufficient and sustainable on their farms. Our calculations indicate that if a farmer plants 10% of their tillable land base to an oilseed crop it will provide over 75% of farm’s fuel needs and over half the protein meal needs.

One aspect the program looks at is net energy return, or how much fuel it takes to grow the crop versus how much yielded in return. On one test plot of sunflowers in 2008, the fuel use was tracked for every pass of the tractor, and it was determined that 8.13 gallons of biodiesel per acre was used for organic production. In return, that acre yielded 76 gallons of biodiesel and 890 pounds of 31.4% protein meal. The press uses 38 kilowatt hours per day to operate, producing 100 gallons of oil. This is less than $.04 per gallon and $3.80 per day to operate at $.10 per kwh.

The 466 International truck which pulls the trailer was retrofitted with a two-tank Elsbett kit in February of 2009. It has logged over 10,000 miles on waste vegetable oil as it tows the biofuel press trailer. It starts up on diesel or biodiesel, and once the engine has reached required temperatures, it starts to draw from the vegetable oil tank for operation on 100% vegetable oil. Then, ten minutes prior to shut down, a switch is flipped to purge the fuel lines of vegetable oil for the next start-up.

Since the first pilot conversion in 2009, three moreOrganicValleyfleet trucks have been retrofitted with Elsbett kits to operate on waste vegetable oil and three farms have done the same with their high-fuel-usetractors. To fully utilize the conversion kit it is best to retrofit tractors that are in the field for hours at time.

For more information on growing and processing oilseed crops on your farm or to learn more about how you can become more fuel and feed independent, contact Jake Wedeberg at 1-888-809-9297 or jake.wedeberg@organicvalley.coop.
Posted in Small Farms Quarterly