Since 1970 when former President Nixon went to China, many Americans have become familiar with acupuncture and Oriental medicine, having either visited a practitioner or knowing someone who has.

Especially since 1994, when our small mid-Hudson Valley farm was founded to grow Asian medicinal plants, the word-of-mouth popularity of this modality has increased considerably.  High Falls Gardens’ experience suggests that traditional medicine holds promise as a means for many small farms to improve their bottom line.

GROWING MARKET OPPORTUNITIES
National health statistics show that Acupuncture  and Oriental Medicine (A&OM) is gaining more of the alternative medicine dollar, most of which is out-of-pocket. While visits to complementary and alternative medicine (CAM) practitioners declined overall in the decade ending in 2007, visits to A&OM practitioners tripled during that period (1).
Oriental medicine in the U.S. now consists of more than 22,000 professionals licensed in over 40 states, national certification under the U.S. Dept. of Education, more than 50 accredited graduate schools, and many professional associations at the state and national level (2).
Acupuncture was sensationalized as a result of Nixon’s trip to China, but afterwards Americans began to understand how the heart of Oriental medicine is dietary therapy and exercise.  The vast Chinese knowledge of food and its healing properties is documented in the current official materia medica, which lists over 7,500 plant species (3).  The English translation used as a textbook in clinical training in the U.S. covers only about 500 plants (4). 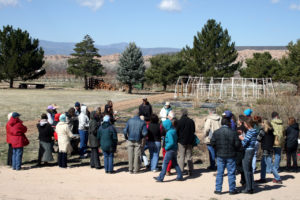 An estimated 300 species of Asian medicinal plants have migrated to North America in the past two centuries, coming in through the ornamental trade or through botanical garden collections.  Several species are notorious as “invasives;” these are well known and documented in national databases (5).
High Falls Gardens grows about 120 species of Asian medicinal plants, most of them perennial.  Our farm has played an active role in national networks of both medicinal plant growers and herbal practitioners who are creating the confluence of eastern and western traditional medicine.  Chinese medicinal herbs are being produced in the United States on a small scale; at the same time, practitioners are investigating the incorporation of North American species (many of them closely related to their Asian analogs) into the Chinese materia medica.

DOMESTIC PRODUCTION
Currently, most A&OM practitioners use herbs imported from China by trusted agents who carefully source and test the material and sell only to the profession.  Most of the herbs by species are wild harvested or incorporated into mixed cropping systems by farmers in China.  While the effects of pollution and environmental deterioration in Asia (as well as in our own country) are a matter of great concern, China’s advantage is that small-scale, traditional agriculture models are still very much alive.  Environmentalists in China are working on “leap-frogging” their small farms over fossil fuel-based systems to solar and biogas power (6).

Any one of several factors, however, could disrupt the supply line from China.  When our network presented colorful, fresh-dried samples of domestically-grown herbs, A&OM practitioners recognized an alternative means to assure future access and quality.  While domestic production is a long-term goal requiring cooperation on the local and national level, interest in this possibility is increasing.
To move forward, High Falls Gardens cooperated with our California counterpart, Chinese Medicinal Herb Farm (7), to create a website portal called LocalHerbs.org, allowing licensed practitioners to buy direct from American farms.  A few small task forces of growers and practitioners, aided by friendly land-grant institutions, have begun to create the basis for regional production and distribution systems.  New Mexico State University launched a training program in 2009 and put it on line for any grower who wants to investigate Asian medicinal plant production and marketing (8).

INCOME POTENTIAL FOR SMALL FARMS
Three characteristics of traditional Chinese medicine seem to present new opportunities for small farms.  Historically, the herbs are valued as agricultural products rather than as manufactured goods. No hard line exists between food and medicine.  The basic delivery method is cooking — dried pieces are mixed into a formula, which is then decocted.  Practitioners are trained in their graduate schools to recognize the taste and smell of the dried herbs; they get really excited over the fresher American products.  All the quality advantages enjoyed by small farms that can attend to the craft values of food production, so valued by restaurant chefs, are being rewarded.

In addition to their agricultural quality, the herbs take on added value as a necessary ingredient in a traditional formula.  Efficacy is considered to be the result of synthesis during decoction.  Plants that ordinarily have little to no commercial value at present become potential crops.  Examples include the cattail pollen (pú huáng) which is part of our landscape, or cornus fruit (C. officinalis, shān zhū yú), closely related to ornamental species.  At current prices on LocalHerbs.org, each of these products could be sold direct for over $30 per pound, dry weight, if certified organic.
Finally, because the A&OM practitioners within a locality or region can calculate the number of herbal formulas dispensed and rank the most widely used formulas, the quantities of produce needed can be projected over time.  A cooperative planning and development process seems key to developing this industry.  Growers and practitioners are beginning to recognize this opportunity, but we need all the help we can get from the agricultural research system.  Economic development expertise and funding would act as a powerful catalyst.

Jean Gibletee is the owner of High Falls Gardens in Philmont, NY.  She can reached at info@highfallsgardens.net.
Posted in Small Farms Quarterly